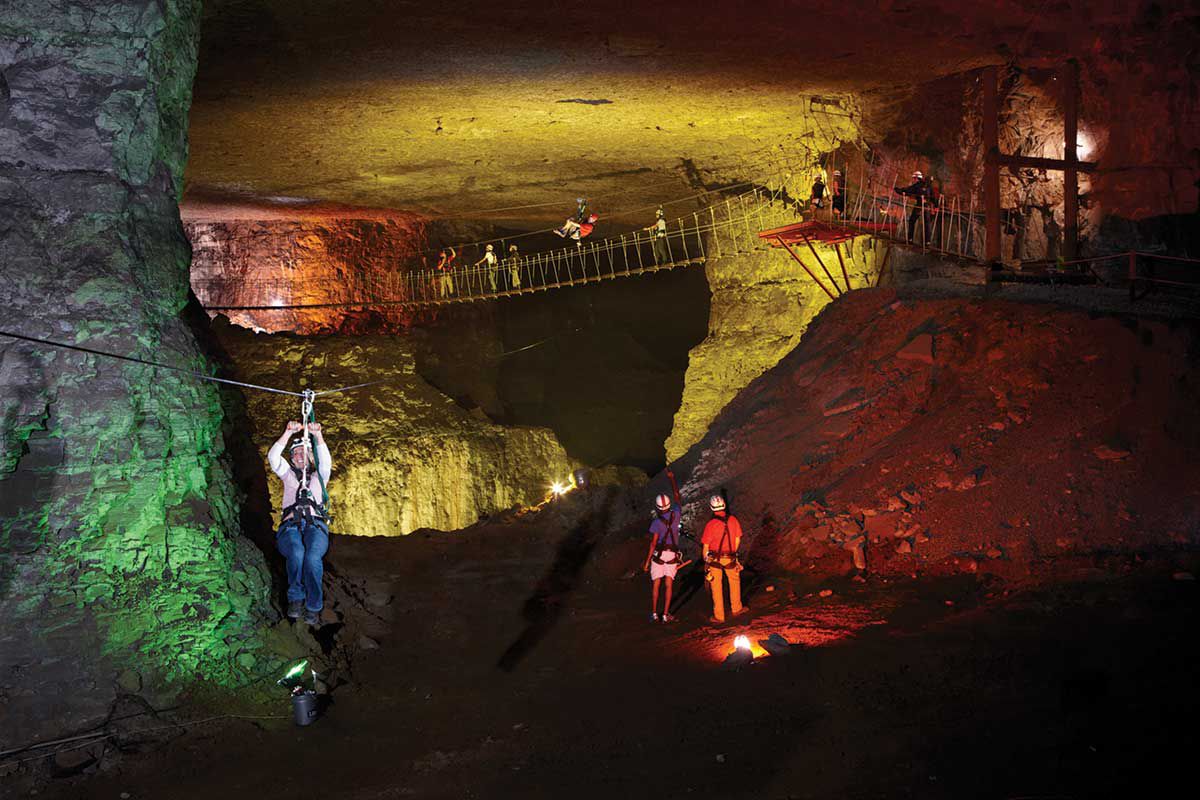 The city has zip, animal magnetism, and thrills galore

Some of Louisville’s most adventurous attractions aren’t even visible to those driving or walking around the city: they are part of the Louisville Mega Cavern. The man-made cavern opened in 2008, part of the 17 miles of roadways in caverns beneath the city. And although adventure abounds, there is something to do for every member of the family.

If you crave excitement, Mega Zips is the Mega Cavern’s most popular way to satisfy that desire. There are six underground zip lines, including a dual-racing zip line, as well as two challenge bridges that test your courage. In addition, an Association for Challenge Course Technology-trained zip guide will lead you on an adventure beneath the city that lasts up to 2-1/2 hours. (There are age and weight restrictions.)

Aerial challenge courses, also known as ropes courses, are the hottest new extreme sport in Europe. Mega Quest’s courses are modeled after them; when first built, they were among only 20 in the U.S. And the cavern’s bike park covers more than 320,000 square feet, including 45 trails, jump lines, pump tracks, dual slalom, BMX, cross country, and single track.

There are also activities for small children, seniors, and those who are physically challenged. Board an SUV-pulled tram and a cavern guide will take you on a 60-70-minute tour with highlights that include early cavern formations, a replica of the Cold War-era nuclear fallout bunker, a worm recycling/tasting room (an example of organic recycling; and yes, tour takers have the opportunity to taste a worm), and an early mining operation with visual and written information about what the area would have looked like in use.

“People come from all over the world,” says Jeremiah Heath, co-manager. “It is truly unique. The vast size of the cavern itself is overwhelming, and the attraction is unique because it is underground. No one else is doing the combination of things underground that we are.”
Louisville Zoo
Louisville Mega Cavern is directly below 70 percent of another of Louisville’s attractions, the Louisville Zoo.

The zoo is in the final days of the Nature Connects LEGO Brick sculpture exhibit, so hurry. Through July 5, you can see extraordinary sculptures of animals and botanicals created with LEGO Bricks. Win a weekly prize in a scavenger hunt when you answer questions found on the guide map, provided at the entrance.
Families with children can also have fun with LEGOs in the LEGO Brick Stay & Play Area, playing with 15,000 loose LEGO Bricks. The area is open weekdays 11 a.m.-2:30 p.m. (stay until 3 p.m.) and weekends 11 a.m.-4:30 p.m. (stay until 5 p.m.), weather permitting.

In late 2015, an enhanced area for elephants will be reopened. The elephant renovation area will provide a closer experience with the elephants, and some visitors might even get the opportunity to help bathe one.

Kentucky Kingdom
A few miles away is Kentucky Kingdom, reopened in 2014. Hurricane Bay is now twice its original size, including a new area called Hurricane Bay Beach Club. This lounging area features eight water rides and attractions, including, according to the Travel Channel’s Extreme Waterparks, “the tallest body slide on the planet.”
There are eight new rides including T3, a suspended, looping coaster that flips you head over heels. Cyclos is a swinging/rotating pendulum that loops 360 degrees in the air, and the Skycatcher swings you 130 feet above the park. Later, cool off on the Raging Rapids River Ride, with a whitewater rapids adventure guaranteed to get you wet.

Kentucky Kingdom
Louisville, KY
(502) 813-8200
Located on the grounds of the Kentucky Exposition Center, at the intersection of I-65 and I-264. If using GPS, simply search for Kentucky Kingdom.