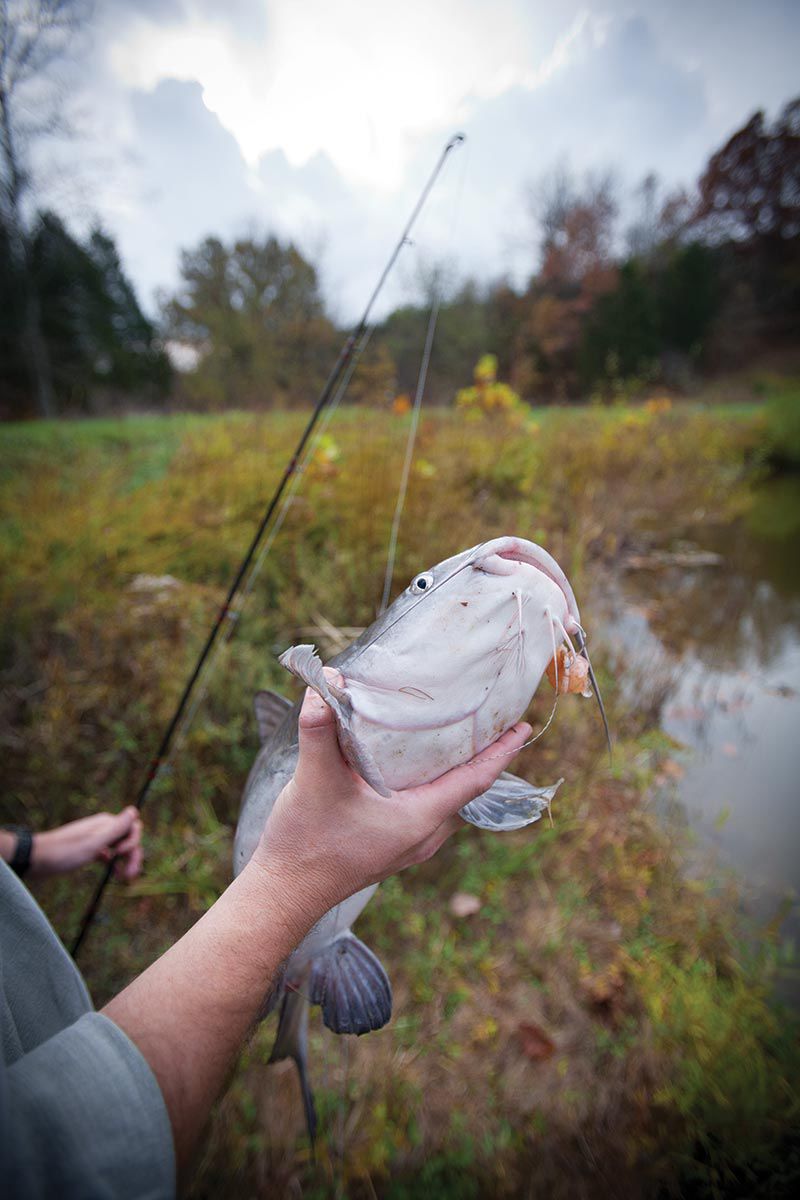 Catching catfish in summer is generally a relaxing and lazy way to pass the time. Photo: Obie Williams

A snore was just a few breaths away when my brain launched into full awareness. Ever so quietly, I realized, the line was peeling off one of the fishing poles that I had propped up on the bank. My fingertips had not quite reached the handle when the line ran out and the pole shot into the water, never to be seen again.

Despite the occasional adrenaline rush, catching catfish in summer is generally a relaxing and lazy way to pass the time—fishing as it should be, in other words. The equipment isn’t complicated and the reward—buttery filets embraced by cornmeal and fried to a crunchy shell—is well worth the effort.

Channel catfish are a prime target for many anglers for a variety of reasons. “Your hope of catching a 15-pound bass is zero, but the sky’s the limit as far as catching a big catfish,” says Steve Marple, who runs Pfeiffer Fish Hatchery in Franklin County for the Kentucky Department of Fish and Wildlife Resources.

Marple’s operation is responsible for supplying 150,000 catfish a year for stocking around the state. The majority of these fish, 80,000 a year, are split among the state’s 40 Fishing in Neighborhoods (FINs) lakes.

All FINs lakes receive catfish in March and August. Twenty-seven receive additional fish in April and May. Anglers can go online to www.fw.ky.gov to find these lakes (search for FIN), see the full stocking schedules, and learn how many fish are put in each lake.

While hatchery crews strive to produce 1-pound catfish for stocking, sometimes they add some bigger specimens to the mix to make things more interesting for anglers at FINs lakes.

“We have some holdover fish and excess broodfish that we add sometimes,” Marple says. “We stocked some in the 3-5 pound range this year, but sometimes they’re in the 10-12 pound range.”

Catfish hunt primarily by smell. Drop food into a tank of blind catfish, and they’ll quickly find it. This is why chicken livers, shrimp soaked in strawberry Kool-Aid, and rank-smelling baits are so effective for catfish. In the heat of summer, these are best fished shallow or under a bobber.

“They’re very predatory. They’ll take minnows and live bluegills,” Marple says. “It’s also not accurate to call catfish bottom feeders. In a deep pond, there’s usually no oxygen at the bottom in summer. The fish might go down to the bottom briefly to get the food they smell, but they don’t hang out down there.”

Catfishing is not only fun for the family, but it can feed the family. Just keep an eye on your fishing gear. Trust me.