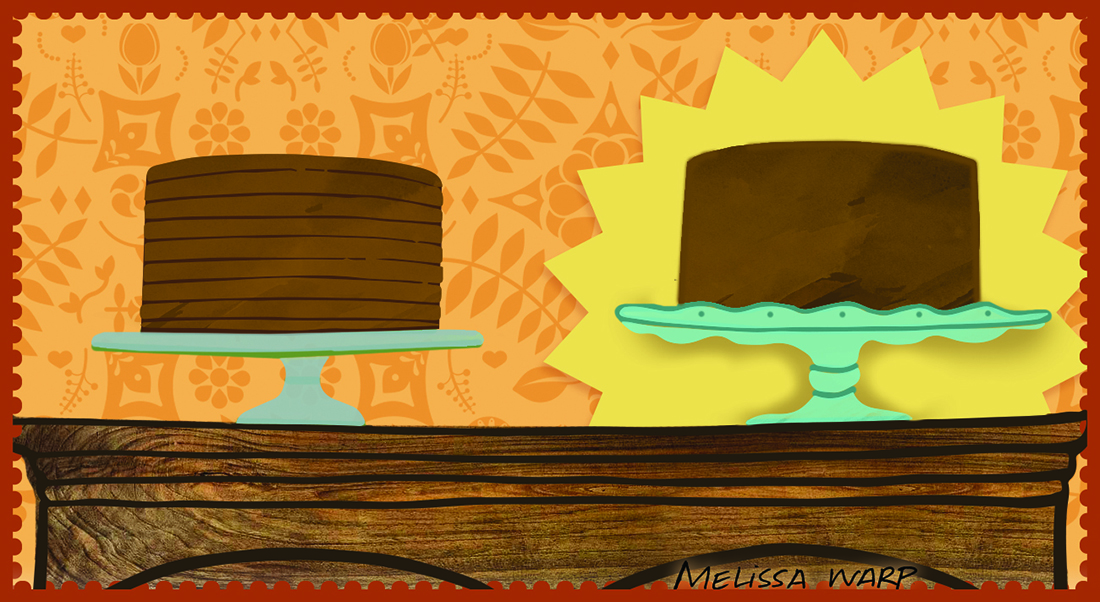 Our thoughts this time of year often drift through a dreamy haze of Thanksgivings past to cherished memories of family gatherings and fireside conversations; cozy kitchens rich with the aroma of yeast rolls, ham, turkey, puddings, pies, and cakes.

Ninety-six-year-old Geneva Logsdon’s memory ventures back some 70 years to a “chocolate cake incident” in her mother-in-law’s kitchen.

Her son, David Logsdon of Louisville, told me a few months ago that his mother has been troubled by the episode since the late 1940s.

A few days later, I visited her assisted living residence to hear the story firsthand. She was trim and alert, with a ready smile and a warm handshake. I wouldn’t have guessed her to be 96.

Yes, her son was right, she said. She still harbors bad feelings over the chocolate cake incident after seven decades. She sometimes dreams about it.

You see, Geneva and her sister-in-law, Ruthie, never got along very well. They weren’t exactly enemies, but minor differences had dulled their friendship.

On what Geneva believes was a Thanksgiving Day in the mid- to late 1940s she and Ruthie—who passed away many years ago—arrived at Geneva’s mother-in-law’s, Granny Logsdon’s in Bullitt County, each with a chocolate cake they had baked. Geneva loved chocolate and had found the cake recipe on the back of a Hershey’s cocoa can. She’d already baked one cake from the recipe for a gathering of her Sunday School class, and had gotten wonderful reviews.

At Granny Logsdon’s, she and Ruthie both placed their chocolate cakes side by side atop what in those days was called an “icebox,” a forerunner of the refrigerator.

Geneva showed me exactly how the cakes were situated, using the top of a small chest

in her room to explain that Ruthie’s cake would have been to my left facing the chest, and hers to the right.

She described in detail where the women were standing in the kitchen, Ruthie on the right side of the icebox—near Geneva’s cake.

During the course of conversation, Geneva said she looked away for a moment and, “KABOOP!” She turned to see her beautiful chocolate cake splattered on the floor, and the antique cake plate that belonged to Granny Logsdon, broken.

Worse yet, Geneva is nearly certain she saw a wry smile on Ruthie’s face. And it’s been bothering her all these years.

“Somebody helped that cake come off of there,” Geneva told me.

Would Ruthie have done such a thing? “Yep,” she whispered.

She never again ate any of Ruthie’s cakes.

“I’ve had to ask the good Lord to forgive me for how I was thinking about her…if I’ve been wrong to accuse Ruthie,” she said. “I think it’s helped me to get a little bit of it out of my system.”

She asked if I thought she was making too much of the chocolate cake incident.

It’s hard to say, Mrs. Logsdon. I’d have to taste your cake to be sure.