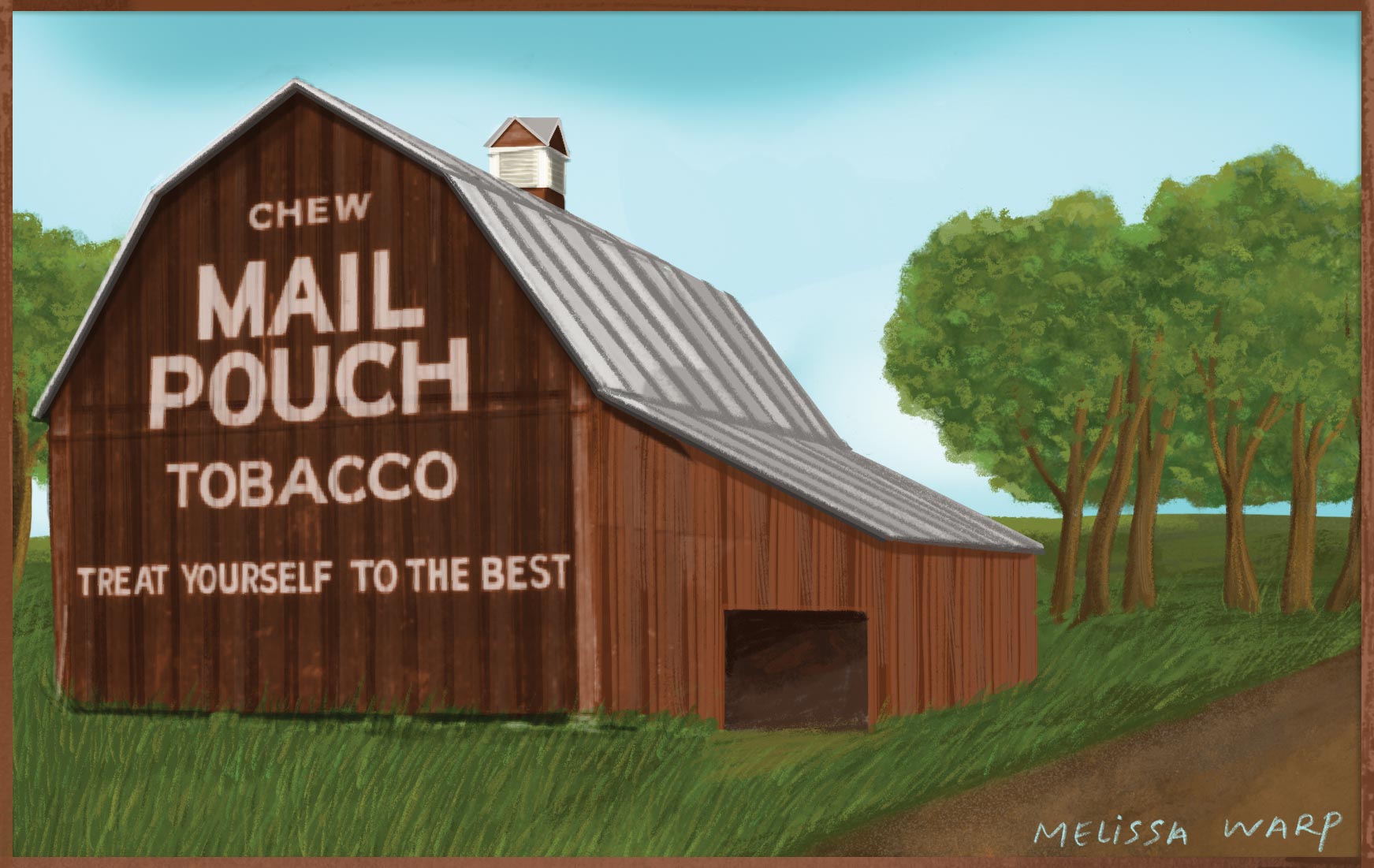 WHILE I WAS TRAVELING DOWN U.S. 31-E in Hart County a few months back, the sight of a weathered old barn, partially hidden behind a grove of trees just below the LaRue County line, called back a memory and a smile.

Still visible on the side of the barn facing the highway were dim letters in white and yellow against what once was a black background, “CHEW MAIL POUCH TOBACCO—Treat Yourself To The Best.”

The master of these fading brushstrokes of barn advertising, Harley Warrick of Belmont, Ohio, passed away in November 2000 after a 55-year career in which he and his helpers painted or retouched more than 20,000 Mail Pouch barns in 13 states, including Kentucky. He initialed and dated some of his work. And yes, he chewed Mail Pouch.

When I spoke with him by phone a year and a half before he died, he guessed that most of the Mail Pouch barns in Kentucky must have been “in pretty bad shape” by then since he hadn’t been back to repaint them much after the 1965 Highway Beautification Act eliminated many roadside billboards. The act was later amended to exempt Mail Pouch and a few other folk heritage barns.

During the peak of barn advertising, from the early to mid-20th century, barn art across Kentucky and many other states urged passing motorists on busy roads to try various products, or to “See Rock City,” or visit Lookout Mountain, Cudjo’s Cave and others.

Mail Pouch barns were once more numerous in some eastern Kentucky counties where chewing tobacco was popular among coal miners who could not smoke in deep mines.

By the time Harley Warrick was laid to rest, his Mail Pouch barns had already taken their place as rural American cultural icons, favorite subjects of artists and photographers.

One of those photographers, Bill Eichelberger of Fort Thomas in Campbell County, has been photographing Mail Pouch barns since the mid-1980s. While a history major at Northern Kentucky University he developed an interest in preserving images of cultural landmarks.

His earliest Mail Pouch barn searches in Kentucky took him into Mason and Fleming counties, then down U.S. 27 into Pendleton and Harrison counties. He eventually canvassed much of Indiana and Ohio, and central and eastern Kentucky. Many of his 240 or so Mail Pouch barn photos, along with those of other photographers, may be seen on the websites, mailpouchbarnstormers.org and LandmarkHunter.com.

He guesses there could be as many as 40 to 45 Mail Pouch barns remaining in Kentucky, but says most are disrepair, their paint fading, their roofs and boards ravaged by weather and age.

Yet, thanks to Eichelberger and others, today’s vanishing remnants of Harley Warrick’s memorable roadside art will survive in pictures for many more generations. As Warrick said when we last talked, the barns are getting more popular now that they’re disappearing.