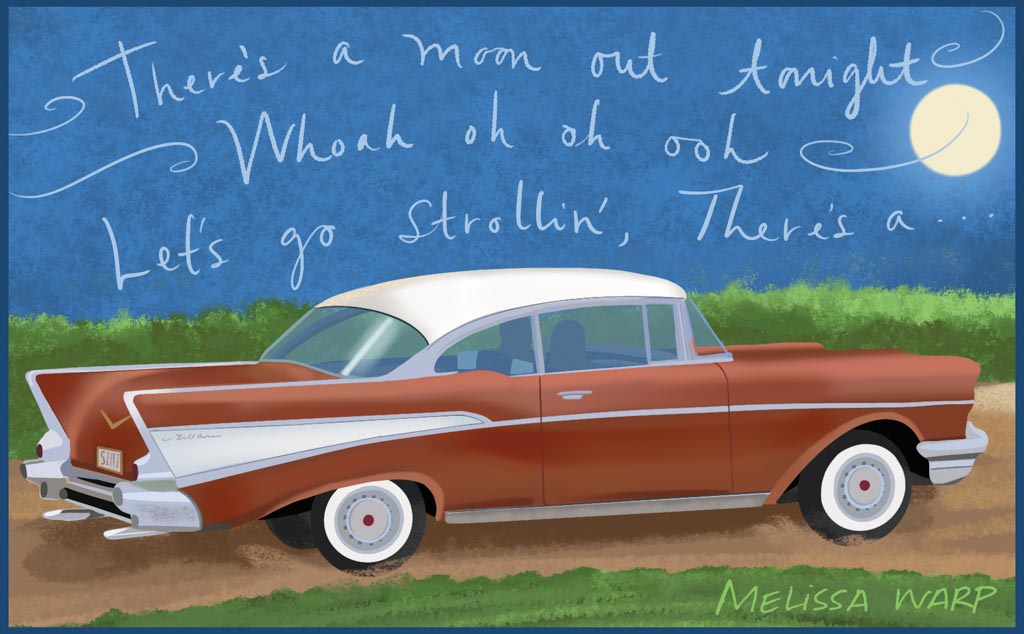 Asong on the radio took me back for a moment to high school days, behind the wheel of my favorite car—a 1957 Chevy Bel Air.

There’s A Moon Out Tonight by an early doo-wop group called The Capris, was a bittersweet flashback. Often, in the middle of one of those great songs, the ’57’s radio would suddenly go silent, and I’d have to give the dashboard a good thumping with my fist, near the speaker, to restart the music, usually just in time to hear the ending.

It played havoc with the mood on a date.

No, the ’57 wasn’t perfect, but in her prime she was a looker. And ever since she parallel parked with me during my driver’s test, she’s owned a little piece of my heart. I loved her ivory hardtop, her metallic copper body (which some Chevy paint guru named “Sierra Gold,”) her charming tailfins, the big gold “V” on the front and back, and her 283 cubic inch V-8 with a four-barrel carburetor that was forever whispering, “make me go faster!”

In reflection, maybe that wasn’t a good idea, considering that my high school sweetheart, Jackie, who is now my wife, has no recollection of seat belts in the ’57. She does have all-too-vivid recall of trouble with a door latch, which I tried to remedy with a “do-it-myself” shortcut to avoid unnecessary expense.

The passenger door would not stay closed, and that can be tricky on hard left turns. So I came up with a two-fold safety idea of tying the ends of a sturdy nylon rope to each arm rest. I called it, “the rope stretched across the front seat.” You know it today as “passive restraint.”

Jackie was fond of the ’57, but fussed about the yellow rope, and seemed uncomfortable with tying herself in when I picked her up, then simply untying the two half-hitches when we got to a movie.

She complained until I eventually had the door latch repaired, but I don’t think the speaker was ever fixed. Otherwise, I would not still resist a mild urge to clench my fist when cruising down memory lane and a favorite “oldie” comes on the radio.

Of course, there are other unforgettable vehicles besides the ’57 in time’s rear-view mirror, most notably an old Jeep that I still miss from my days on the farm. But that’s another story. And I’m guessing that, by now, you’re lost in your own car and truck memories—which I welcome for a future back page.

A dear-departed friend used to tell me about the car he drove on his first date with the pretty girl who later became his wife.

When he opened the passenger door to let her in, the door fell off!

I wish I had been there to help. I still carry a crescent wrench, a roll of duct tape and a strong piece of nylon rope for such emergencies.