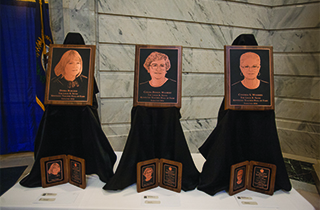 The Governor Louie B. Nunn Kentucky Teacher Hall of Fame inducted three educators in February at the Capitol Rotunda. The three represent a combined total of about 110 years of instruction.

Debra Burgess, a native of San Antonio, Texas, began her teaching career in 1980 at now Murray State University, teaching high school Spanish, Latin, and French until retiring in 2012. Burgess continues as an adjunct Spanish instructor at Murray. Among numerous awards, Burgess was chosen Murray Outstanding Teacher of the Year in 2008.

Golda Pensol Walbert, Glasgow, began teaching in Rockcastle County in 1943, moving to Harlan County Public Schools, 1952, and Barren County Schools, 1954-1989. The WKU-Glasgow Samothrace Club, “honoring her love of knowledge and bettering the lives of others,” established a scholarship in her name in 2012.

Cynthia S. Wooden, Florence, began her career in Amarillo, Texas, in 1979, moving to Kenton County schools in 1987. Wooden continues to teach language arts at Turkey Foot Middle School.  “My love of life is teaching kids and seeing that light when something clicks with them,” Wooden says.

WKU was selected as the home of the Kentucky Teacher Hall of Fame due to its more than 100-year history in teacher education.