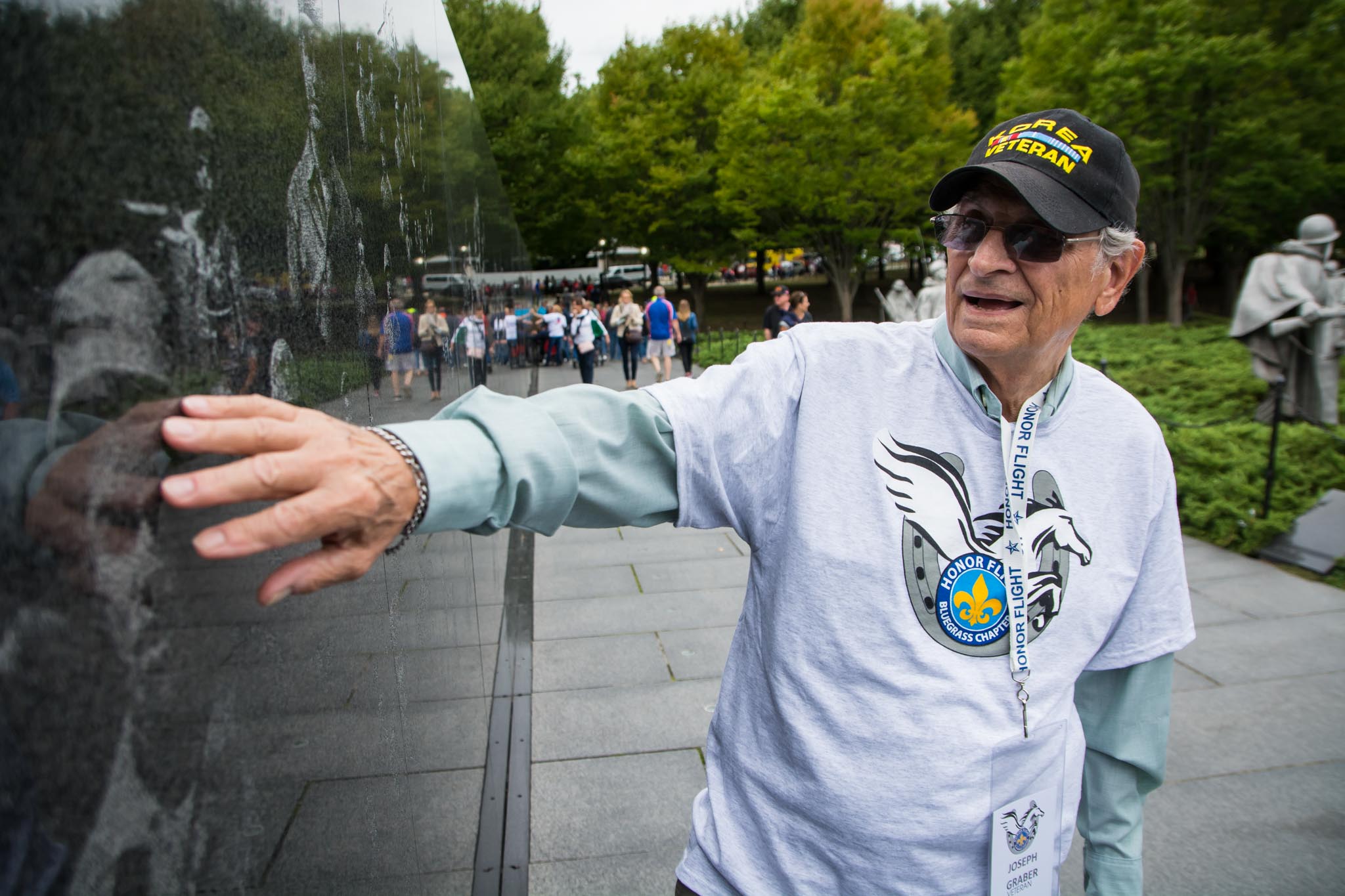 JOE GRABER, 88, WILL NEVER FORGET the first night he arrived in Korea.

In May 1952, after one month of being seasick almost daily sailing from the west coast of the United States to Korea, Graber, then a 20-year-old Army private, finally arrived near the front lines and climbed into his bunk at 3 a.m.

“I took off all my clothes except underwear and a T-shirt, no boots,” he says.

He slept until North Korean mortars rained down on the camp.

“I put on my boots, grabbed my carbine and .45 and started to run, but I stepped on my shoelaces and fell down,” says Graber, who lives in Somerset. “Explosions were going on all around, and somebody ran by and yelled, ‘Hey, get under one of those tanks.’”

Graber scrambled between a tank’s treads and started praying. “I stayed there all night because I was afraid to move,” he says. “From then on, I slept every night wearing clothes, carried a .45 and kept my boots on.”

In commemoration of Veterans Day 2021, Kentucky Living salutes Graber and more than 18,000 Korean War veterans who live in the state. This is the story of two of them who fought to keep South Korea free from Communist rule.

“We were in one place, a combat zone about a mile from the front,” he says. “I could shower once a week for seven minutes, and you had to be quick, because after seven minutes the shower stopped working.”

His unit fought near the 38th parallel, the dividing line between North and South Korea. He performed multiple duties in tanks, including loading shells, driving and looking for targets.

“I was 20 years old and getting shot at, and you couldn’t even drink,” he says.

After more than a year of fighting, he learned that an armistice had been signed on July 27, 1953. The war was going to end. “At 6 a.m. they called us together and said the cease fire is going into place,” he says. “The fighting stopped that day at 6 p.m.”

Graber lost four friends in Korea. After being discharged, he returned to his home state of Michigan, earned two college degrees with financial assistance from the Army, married, had two children and spent 30 years in education before retiring and moving to Kentucky, where his late wife grew up. He has since remarried and lives in Somerset with his wife, Wanda.

“It took me back to 1953,” he says. “I almost started crying when I saw them (the statuettes) with the raincoats and the helmets. It was the greatest day of recognition I’ve ever had for being in the service.”

A photo of Graber during his service days, as well as other memorabilia and honors at his home. Photo: Tim Webb
Graber wears his uniform even today as he serves as honor guard at funerals. Photo: Tim Webb
Honor Flight Kentucky ambassador George Campbell consoles Vietnam Veteran Russ Reed at the Vietnam Veterans Memorial in Washington, D.C. Campbell was mission flight director for this trip. Photo: Jon Park
Korean War veteran Donnie Estes stands near a tank at the Montgomery County VFW post near Mt. Sterling. Photo: Tim Webb
Donnie Estes served as a mechanic in the Korean War—he was promoted four times.
Estes stands at the 38th parallel, which goes through Korea and his hometown of Winchester. Photos: Estes family

It’s a long way from the rural community of Becknerville in Clark County to the 38th parallel of Korea, but 90-year-old Donnie Estes is proud that he left the family farm at age 22 to serve his country.

In addition to doing chores on the farm, Estes took a job as a mechanic at age 12 to support his family. Later, he helped pour the first concrete at Dale Station, Kentucky’s first rural electric power plant at Ford, before receiving his Army draft notice in 1952.

Estes, a consumer-member of Clark Energy who today lives near Mount Sterling, grew up without indoor plumbing or the comforts of life, so he was well prepared for the trials of Army life before arriving in Korea.

“They wanted me to be a medic. This was my training in Virginia, but I asked to speak to someone in charge and told them, ‘I can’t be a medic. I’m a mechanic.’ So I got transferred,” he says.

Working just a few miles behind the front lines, Estes repaired tanks, trucks, artillery guns and tank turrets. He was so good at fixing equipment, the Army promoted him four times, and he had 12 people working under him—pretty good for someone whose formal education ended with the seventh grade. “The college guys didn’t like that,” he says.

Estes used a sleeping bag and slept in a tent during the entire 15 months he was in Korea. It’s ironic, he says, that the 38th parallel goes around the world and straight through Winchester where he grew up. Unfortunately, Estes lost nearly all of his hearing because of the constant bombardment in Korea.

He came home, married, had two children and farmed until 1972 when he started the Estes Equipment Co. in Winchester, manufacturing machinery for companies across the country. Estes designed and held patents on equipment to spread lime, fertilizer and seed, and he built a machine that was one of the first in Kentucky to blow bark onto playgrounds.

He looks back on his service with pride. The places he saw destroyed upon his arrival in Korea have grown into thriving cities, and nearly 52 million people live free in South Korea today.

“I feel good about what we did,” he says. “I’d go back tomorrow if they called me.”