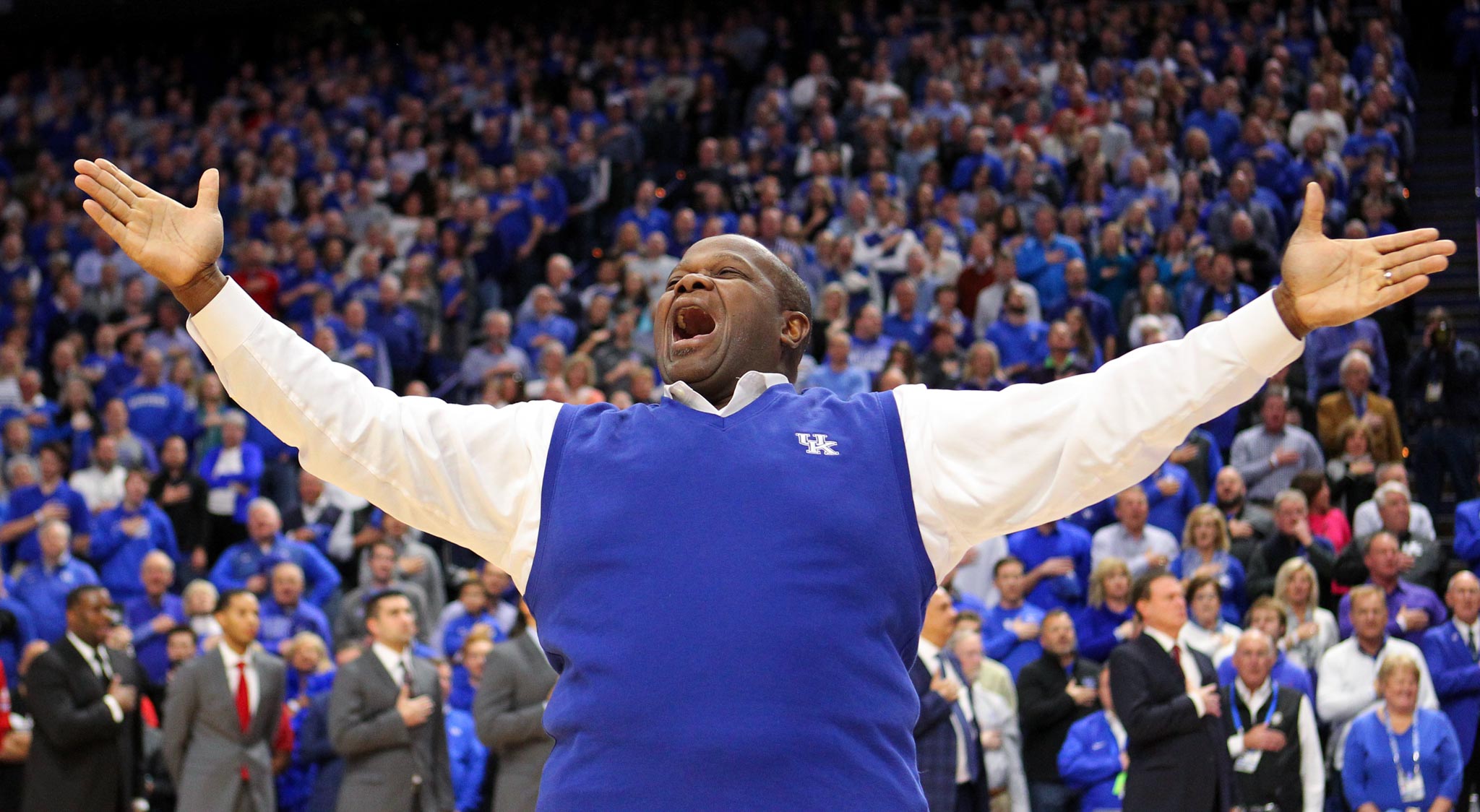 Endowed Chair of Opera Studies at University of Kentucky Everett McCorvey, who has been described as “a wonderfully busy man,” still has time to lead the national anthem at a UK men’s basketball game. Photo: Barry Westerman

On March 8, 2013, McCorvey and his entourage of musicians arrived as surprise guests in our home to sing for a friend and Holocaust survivor, Oscar Haber, at his 103rd birthday party.

The moment McCorvey entered the room, we all were transfixed by his loquacious personality, booming voice and big smile. He took stage and, joined by fellow Metropolitan Opera tenor Gregory Turay, wedged the small-framed Haber between them while hitting the high notes of Puccini’s O Mio Babbino Caro. The aria went through the roof. Opera buff Haber scored a moment neither he nor his friends would ever forget.

That celebration took place the day after what McCorvey had remembered as an anniversary of a 1965 march for voting rights from Selma to Montgomery, Alabama, known as Bloody Sunday. Born in Montgomery in 1957, McCorvey’s life was shaped by the civil rights movement. His father was a deacon at First Baptist Church, where Ralph David Abernathy, an assistant of Martin Luther King Jr., was a minister. Choirs would come to the church in support of civil rights, singing spirituals. Everett was growing up surrounded by this music.

At 8, Everett took up the trumpet, inspired by a trumpet-playing student his family housed. He thought it was the sweetest sound, and says he knew right then that the idea of music was what he wanted to be his life. He didn’t know which part of music—yet.

Later, others heard him sing, and feeling encouraged, he decided to pursue vocal training at Alabama State College. His big break came soon after in New York City. He was cast in the Radio City Music Hall production of Porgy and Bess, and next, its debut performance at The Metropolitan Opera. This was where he met his wife, soprano Alicia Helm. With New York gigs under his belt, he realized that what he really wanted was to teach, and went back to college to get his doctorate.

Today, Music Matters podcast host Jason Tramm describes classical tenor McCorvey as “a wonderfully busy man.” The evidence: he is the founder, conductor and artistic director of The American Spiritual Ensemble; the artistic director of The National Chorale of New York City; and president of the Global Creative Connections production and management company that brought us the opening and closing ceremony of the 2010 FEI World Equestrian Games. In his day job, McCorvey is Endowed Chair of Opera Studies at University of Kentucky, and director of OperaLex and UK Opera Theatre, where he will celebrate 30 years this fall.

McCorvey calls the collaboration with UK “a wonderful marriage,” that enabled him to spread his wings and create on many levels, helping him realize his many gifts while sending young talents off into the world.

That marriage took its first steps in the fall of 1991, when UK Music Department Chair Harry Clark challenged the newly arrived assistant professor of voice with an offer to build an internationally known voice program.

“It was music to my ears.” McCorvey says. However, it came with a caveat. McCorvey knew recruiting the best voices without an opera component was virtually impossible. He accepted the challenge and raised the bar, telling Clark that to have an internationally known voice program, you have to have internationally known opera program. The best voices in the world want to go where they can sing opera.

Clark agreed. The voice and opera programs were launched, and slowly built, one vocal, coaching and choral position at a time. This uniquely skilled faculty team, in return, has been able to mold and shape performers that would be competitive in a professional job market.

The team’s results are found in the success of their students. In 1996, Turay became the first UK student to win The Metropolitan Opera finals. The press dubbed him “Pavarotti with looks,” gaining lots of attention for the UK opera program.

To this day, UK Opera maintains a strong relationship with The Met, and has sent several students all the way through its competition rounds. Last year, Blake Denson from Paducah became yet another Met stage winner.

The Richard Tucker Foundation, which matches young artists with vocal programs, recognized the UK vocal program as one of top programs in the country. McCorvey is proud of that honor.

“The beautiful part happening in the profession now,” he says with a chuckle, “is that when a UK graduate is auditioning, they pay as much attention to them as they pay to the student graduating from Julliard.”

McCorvey anchors his research at UK in performance, directing and conducting. The National Chorale of New York City is one of his research projects. In 1995, he also founded The American Spiritual Ensemble, having noticed people don’t distinguish between gospel and spiritual. “I wanted to make sure that the tradition of singing American Negro Slave Spirituals is continued to be perpetuated,” McCorvey says, calling them “the folk songs” of America.

“I feel God has given us all in the world particular gifts,” he says, “and the gifts are what equals the playing field, because when you have a gift, it can lift you up, and then you can, in turn, lift others up. For that, people will respect you for that gift.”

He spends his life finding that gift in others. And it is not always in voice.