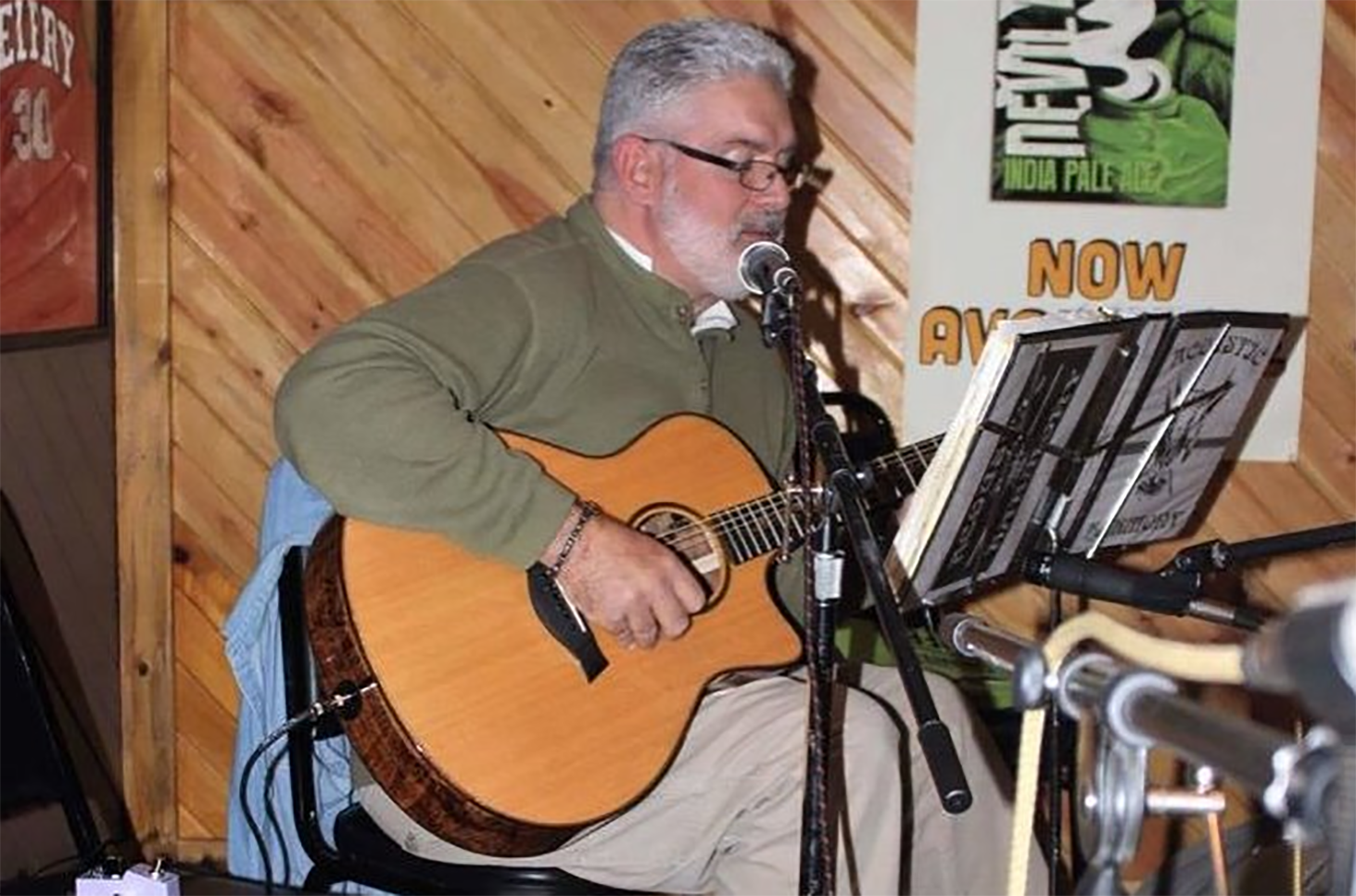 Bruce Smith enjoying one of his hobbies -- playing guitar and performing. Photo:UKNow

But when the Belfry native sat in front of his computer, he said he suddenly realized something frightening: he’d lost all understanding of how to use the machine. Bewildered at the sudden lapse in cognition, he said his coworkers thought he was just joking around at first.

That moment was the first of many “lapses” to come. Smith was a diabetic, and his doctors initially thought his mental fog episodes were due to low blood sugar. When that was ruled out, they suspected he might be suffering from a series of mini-strokes.

“It was like I was taking a trip, but never leaving the farm, you know?” Smith said. “I was awake, but always taking naps.”

It wasn’t until Smith was referred to UK HealthCare that he got a diagnosis: hepatic encephalopathy, a term used to describe the mental fog that accompanies severe liver failure and a common occurrence in patients in need of a transplant. Because the liver’s job is to filter toxins from the body, when it fails, the toxins accumulate in the bloodstream and wreak havoc elsewhere.

The team at UK determined that Smith’s liver was failing due to non-alcoholic cirrhosis. Though neither of his parents had the disease, one may have been a carrier and passed the gene down to Smith.

After getting a second opinion confirming the diagnosis from the Cleveland Clinic, Smith opted to remain at UK and get listed for a transplant. Liver transplant patients are assessed with a score known as the Model for End-stage Liver Disease (MELD), which measures the amount of toxins in the blood and determines the patient’s position on the transplant waiting list. The higher the MELD score, the greater the severity of the disease and need for transplant.

In Smith’s case, his MELD score remained relatively stable for the next four years. However, his mental function continued to decline. As Smith’s symptoms worsened, his doctors at UK referred him to neurologists at UK’s Kentucky Neuroscience Institute, where they ultimately diagnosed him with a much more serious condition.

“Bruce started out with hepatic encephalopathy, but then developed hepatocerebral degeneration, an extremely rare form of brain injury,” said Dr. Malay Shah, director of the liver transplant program at UK. “The exact cause of this disease is unknown, but liver transplant is the only cure.”

Many symptoms of hepatocerebral degeneration closely resemble those of Parkinson’s disease. In Smith’s case, he had trouble with speech, gait ataxia (uncoordinated movement and problems with balance) and ever-worsening dementia. Smith says he was essentially homebound: he was unable to return to work, often couldn’t go to church, and avoided going out for fear of experiencing an episode.

Though Smith’s liver toxicity remained stable – thus keeping his MELD score lower than necessary to receive a transplant – Shah said he knew he needed to push harder for Smith to be transplanted sooner rather than later. He wrote a letter of appeal to the United Network for Organ Sharing (UNOS), a non-profit organization that manages the nation’s organ transplant system, making the case for the severity of Smith’s situation.

“I appealed to UNOS to make Bruce’s MELD score higher than his lab values would suggest because hepatocerebral degeneration needs to be treated with a liver transplant,” Shah said. “Without an expeditious transplant, this disorder becomes permanent and irreversible. At that point, a transplant would be contraindicated because of the permanent neurologic damage from the disease.”

Shah’s appeal was successful, and on Sept. 27, 2015, Smith got a call from UK just as he was arriving home from church. He and his wife packed up and headed to Lexington to prep for surgery.

“I had all this happiness, excitement,” Smith said. “But also the fright of undergoing a major surgery.”

At 2 a.m. the next morning, Smith received his new liver – and a new lease on life. Since his transplant, things have improved drastically. He recovered fully from the surgery, and he underwent physical and occupational therapy to build back his strength and improve some of the basic skills he’d lost during his illness.

“I had to re-learn how to write straight,” Smith said. “I had to use a ruler to sign paperwork!”

As a surgeon who sees firsthand what a difference a transplant can make in the lives of his patients, Shah has always been passionate about raising awareness for organ donation and notes that part of his job is making sure patients understand what a gift they’ve been given.

“Our patients rely on the generosity of others to have a second chance in life,” Shah said. “And that’s exactly what I impart on my patients prior to transplant – that they and I literally owe it to the donor and their family to do the very best we can to take care of that generous gift.”

One way Smith is using his gift is through educating others on his personal experience. He is now a member and ambassador for Kentucky Organ Donor Affiliates (KODA), the organization that runs the Kentucky Organ Donor Registry, educates the public on organ donation, and honors those who have given the gift of life. He was recently featured on a billboard for KODA in Eastern Kentucky, and says sharing his story is one thing he can do to honor his donor.

“What a selfless decision that person, or their family, made,” Smith said. “This is my way of giving back – hopefully, it will get folks interested in becoming a donor and ultimately making a difference in someone else’s life.”

“Bruce is a wonderful patient, and a great donor advocate for KODA,” Shah said. “It’s nice to see folks like him work with the organ bank to help educate others in their respective communities about how organ donation can help their neighbors.”

And though he is unable to work, Smith has returned to an active lifestyle that includes walking, performing and creating. He plays guitar as a hobby and gives lessons to those in his community. He has a small workshop behind his house, where he dabbles in woodworking and metalworking. None of these things would have been possible without the transplant he received a little less than two years ago.

But perhaps most importantly, he says, he lived to be able to hold his first grandchild, born just over a month ago, with a second grandchild coming next month.

“You push through death’s doors and go through what I’ve been through…” Smith said, describing his thoughts when he first held his grandbaby. “And I just thank God that I’m alive to hold this little thing.”

Although hospitals are obligated by law to identify potential donors and allow the organ donor procurement program to inform families of their right to donate, anyone can sign up to become an organ donor by joining the Kentucky Organ Donor Registry. The registry is a safe and secure electronic database where a person’s wishes regarding donation will be carried out as requested.

To join the registry, visit www.donatelifeky.org or sign up when you renew your driver’s license.  The donor registry enables family members to know that you chose to save and enhance lives through donation. Kentucky’s “First Person Consent” laws mean that the wishes of an individual on the registry will be carried out as requested.

UK is the University for Kentucky. At UK, we are educating more students, treating more patients with complex illnesses and conducting more research and service than at any time in our 150-year history. To read more about the UK story and how you can support continued investment in your university and the Commonwealth, go to: uky.edu/uk4ky. #uk4ky #seeblue