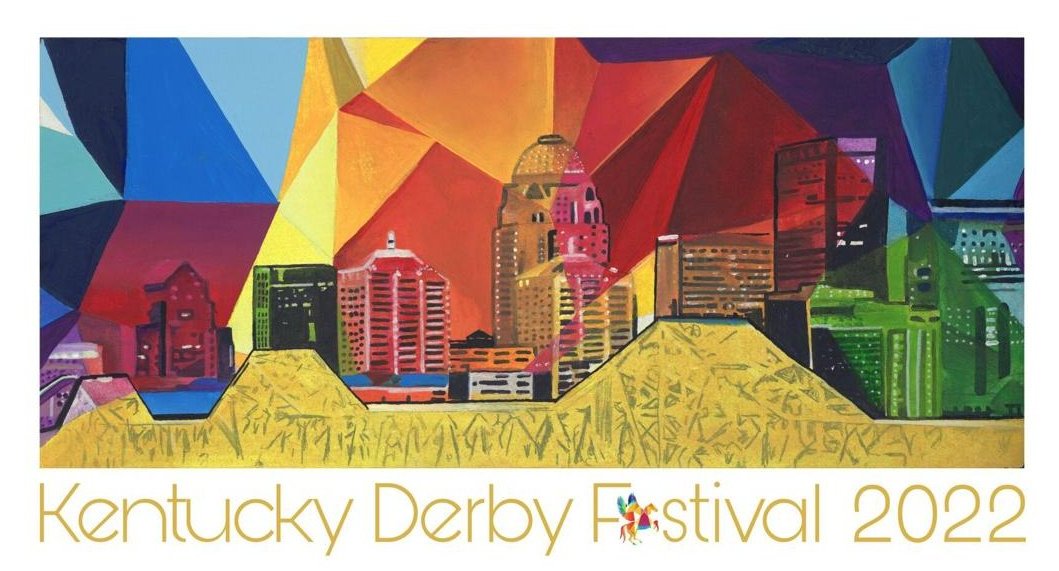 Fans can pre-order online prior to public release

February 7, 2022, Louisville, KY. – A sign of spring and Kentucky Derby Festival this morning, as the Festival’s 2022 poster rolled off the presses at Welch Printing in Louisville. This year’s poster called “Together” was designed by Louisville artist Kacy Jackson, whose mission is to impact and inspire others through his art. It’s the 42nd poster in the Festival’s iconic poster series, which was launched in 1981.

“I wanted this year’s poster design to represent the unity that stems from Derby Festival events,” said Kacy Jackson. “The geometrical shapes and multicolored scheme overlaying the city of Louisville represent the diversity of people brought together by the Festival and the harmony it creates in our community.”

Jackson is a Louisville native who became an internationally recognized artist driven by his passion and dedication. Founder of The Art of Kacy, established in 2017, he has made creative contributions to charitable organizations and public art. From small-scale paintings to large-scale murals, his many styles can be found in nearly every community throughout Louisville, as well as around the country.

“The vibrancy and spirit of Kacy’s image reflects what the Derby Festival hopes to bring back to the community this spring,” said Matt Gibson, KDF President & CEO. “This will be a special year as we look forward to celebrating our favorite traditions together again.”

Welch Printing is a longtime print partner of the Kentucky Derby Festival. While the Louisville based company has worked with the Festival on other print projects, this is the first time Welch has printed the official poster image.

PRE-ORDER DETAILS: Festival Fans can pre-order the 2022 Limited Edition or Official Poster beginning today and receive FREE shipping on their order. The Limited Edition of 500 signed and numbered posters retails for $50 and the Official poster is $30. Both versions can be pre-ordered and will be shipped after the public release on March 16. Pre-order online here.