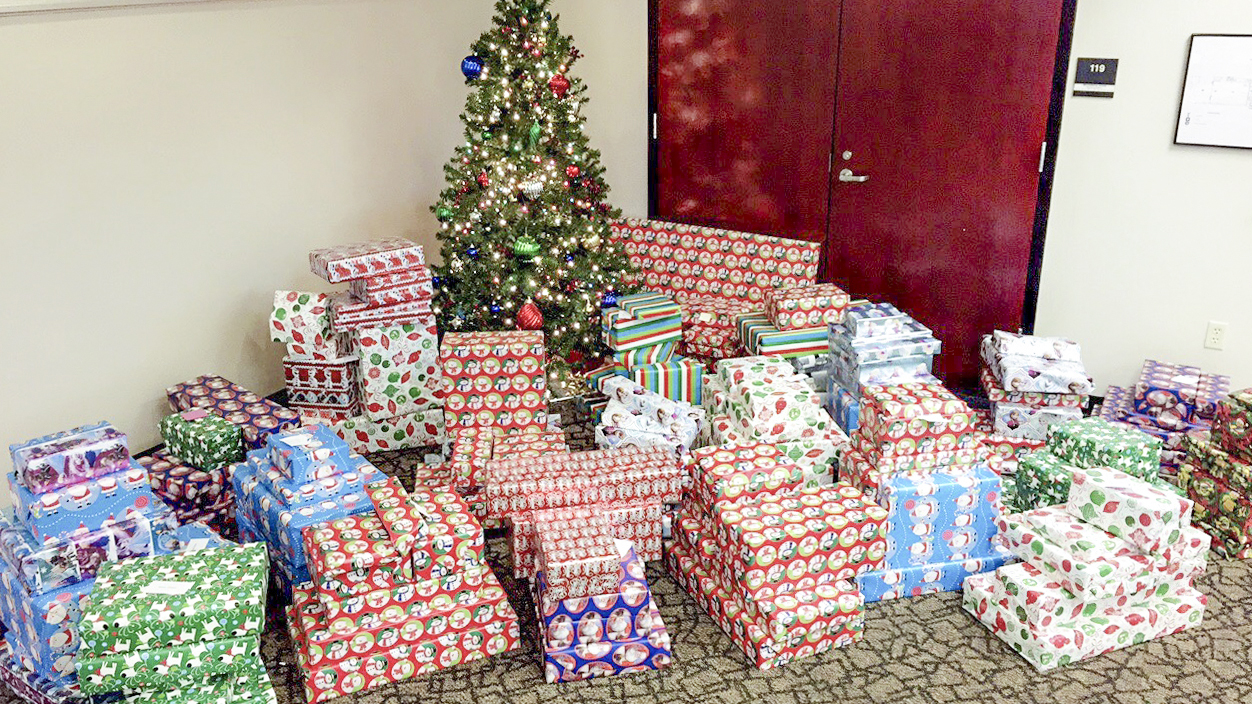 Whether your family celebrates Christmas or Hanukkah, it’s easy to misplace the spirit of joy and peace—the declared reason for the season—by getting caught up in myriad events and must-do’s that seem to rule time during the holidays. The resulting stress can make you dread what should be a fun time of year.

Enjoy these meaningful stories from six Kentuckians who have solved this annual dilemma by creating family traditions of their own. Consider using their ideas as springboards to transform your own holiday into a much-anticipated time of celebration and new meaning for you and those you love.

In a Christian legend shared by many countries, animals talk at midnight on Christmas Eve. As the tale goes, the gathered animals—sheep, donkeys, and camels—witnessed Christ’s birth in the stable at midnight. Just as the baby Jesus was laid in a manger, they were briefly given the capacity to speak and praise God for the miracle they witnessed.

Even when she was a little girl, Eleanor Hume O’Rear Peavy, who now owns Our Ewenique Farm with her husband, Thom, would go out in the back yard with her dogs, “just to see.”

When her now-23-year-old daughter Ele was a child, she and her mom would walk together to the barn, cozy with animals. As a special treat, they would add canned food to the dogs’ and kitties’ regular suppers. That tradition now continues for the whole farm, a menagerie of cows, goats, chickens, dogs, cats, horses, and 80-plus sheep.

Eleanor still visits the barn but not as late. “If it’s really cold, I’m likely to find chickens roosting on the sheep,” she laughs. “It’s wonderfully peaceful. I’ve never heard the animals talk but it doesn’t matter. Believing it happens is in my ‘eternal optimist clause!’ You just never know…”
Eleanor Hume O’Rear Peavy, Georgetown

William Quig has created a holiday tradition that has been not only fun but educational for two generations of children. When his kids were small, he began to use toy soldiers to teach history and tell the Christmas story to them, and now is doing the same for his grandchildren.

When the winter holidays roll around, William, his wife, Rebecca Hall Quig, and their grandkids Dereck, Cheyanne, and Connor remove his toy soldiers from their boxes, and the games begin.

“With Romans, Spartans, and knights (and sometimes cowboys and Indians to fill in), we fight the battles that preceded the first Christmas under Caesar Augustus,” Quig explains. “It usually starts with Cleopatra’s brother bringing the head of Pompey to Julius Caesar.”

Quig and the kids trace history from the Roman civil wars, through the days of Antony and Cleopatra, until the time of Augustus and the nativity scene in Bethlehem. They also set up a Christmas village, where scenes from the French and Indian War and American Civil War come alive, filling their holidays with history.
William Quig, Beaver Dam Kenergy Corp. cooperative member

Though shopping for holiday gifts all year long is not an especially new idea, Roseanna Weaver and her mom Kathleen have honed this tradition to a fine art.

When Roseanna’s family moved out of state and couldn’t come to Kentucky for Christmas, the family began celebrating the holidays in November and had to shop before the usual rush. Roseanne noticed that the best sales for clothing happened around back-to-school time. As the family grew, she began shopping earlier in the year. The week after Christmas and New Year’s, she discovered, many stores begin marking items down 25 percent, then 50 percent.

As her family grows, Roseanna, who lives with her fiance, David Noel, and their kids Dylan Grace, age 4, and Shawn Logan, 2, begins her holiday shopping in January, collecting stocking stuffers and donation items at clearance prices, and checking off holiday list items a stress-free few at a time.

“In the retail rush between Black Friday and Christmas Eve,” Weaver says, “we are able to be at home with family or helping out in the community instead of crawling the mall and crossing our fingers that the store hasn’t sold out of the latest ‘it’ toy.”
Roseanna Weaver, Independence Owen Electric Cooperative member

Teresa Walker loves to cook. But on Christmas Day in 1996, when her children and grandkids finally arrived at her house after a long day with other relatives, all worn out and fussy and not even hungry, she put her foot down.

“From now on,” Teresa declared, “we’re having our Christmas on the 26th.” And so it has been ever since.

When the grandchildren were small, her husband, Darrell, would pick them up. These days, the older grandkids drive the younger ones to their grandparents’ house. Five grandchildren and two great-granddaughters (one who is expected to arrive on December 7) then help cook a country ham breakfast for the family; set the table with crystal, china, and linen; light candles; learn dinner-table manners; and “take ownership in the day’s events.”

Granddaddy Darrell always receives a fun gift from Santa that”coincidentally” the kids will want to help him play with all day long. The older generation gets quality grandkid time and the parents get a rest. The day is a total win-win for everyone.

During her childhood, says Regina “Jean” Miller Morgan, Christmas was all about giving. Gifts were small and inexpensive. Her sister Toots worked at H.L. Green dime store in Lexington, and would give Regina $10 worth of coupons to buy the family presents. When her grandmother Lucy Miller, of Estill County, took to bed with crippling arthritis, Regina would roam the stores selecting items for everyone on her grandma’s limited pension.

“The girl cousins might receive fancy panties; the men, handkerchiefs; the boys, socks; and the ladies, stockings,” Regina says, “but the holiday spirit abounded when I spread the gifts on her bed and let her choose the color for each person and the wrapping paper, ribbon, and bow.”

Years later, when Regina’s mom Nettie had Alzheimer’s and didn’t recognize her own grandbabies, this caring daughter would select and wrap gifts for her to give each grandchild, so each received something special “from Mom-Mom.”

For 23 years, Regina and her late husband, Bob, lived as missionaries in Indonesia. As a result, her holiday focus now is giving to the Lottie Moon Christmas Offering, a Southern Baptist Church fund to memorialize a Chinese missionary.

“The holidays,” says Regina, “were and are all about giving.”
Regina “Jean” Miller Morgan, Smithfield Shelby Energy Cooperative member

Something happened to Hazel Askin years ago that helped create a holiday tradition she embraces today.

One of 10 kids, she wrote a letter as a little girl to Santa requesting a bicycle. After reading the letter, her mom—Carrie Hammond—told her that Santa might not have enough bicycles for every child.

“Back then,” Hazel remembers, “Mom cooked a big dinner and everybody would come home. Christmas was about family, not about gifts and money.”

Though a stuffed pink poodle awaited her under the tree, her older brother, Claude Ray Hammond, arrived later for dinner and told his little sis that Santa had left a green bike on the porch for her since it wouldn’t fit down the chimney. Years later, she learned that he’d won the bicycle at his workplace Christmas party.

“My brother didn’t have kids and knew our mom couldn’t afford a bicycle,” Hazel says. “He made my Christmas special.”

As a result, she and her husband, Steve, who have two grown children, give gifts to a child whose family can’t afford them.

“I’m at the age that I don’t need anything,” Hazel says. “Giving a gift they wouldn’t normally receive to a child is my gift to me.”
Hazel Askin, Brooksville Fleming-Mason Energy Cooperative member