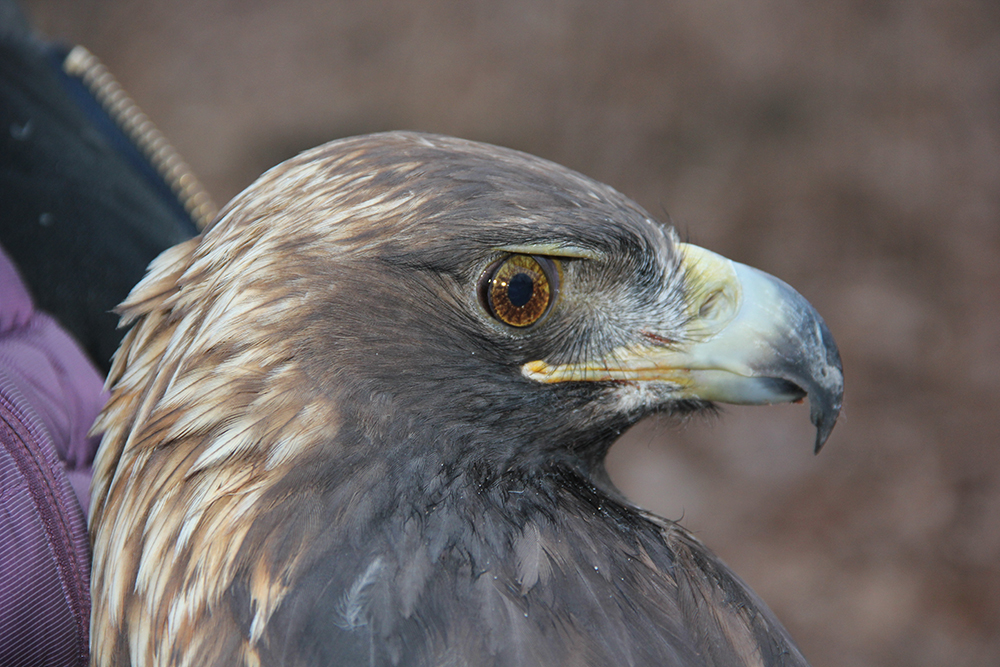 Clermont –  Bernheim officials announced today that they are now tracking a second eastern golden eagle, a female and companion of the male raptor they have been tracking for four years. The project is believed to be the first pair of golden eagles tracked together in the eastern United States. Bernheim officials cited the large forest block habitat that Bernheim provides as critical to the preservation of this magnificent species.

In partnership with Cellular Tracking Technologies and Conservation Science Global, the Bernheim team briefly captured the nearly 12-pound majestic female and outfitted her with a GPS satellite transmitter. They are now able to follow her movements along with Harper, the male eastern golden eagle they have been tracking since 2015.

“These two golden eagles are spending time together,” said Andrew Berry, Bernheim’s Forest Manager. “From the transmitter signals we can tell they are roosting and flying together. We have also observed them in the field and on trail cameras together.”

Like her companion, Harper, Bernheim is calling on the public to help in name the female eagle. Harper is named for the brand of bourbon Bernheim’s founder Isaac Wolfe Bernheim sold.

The three name choices for the female eagle are:

●     Goldie: for the beautiful golden feathers on the crown of her head.

●     Athena: for the Greek goddess of wisdom, courage and inspiration.

●     Persephone: for the Greek goddess associated with the changing seasons.

Voting is now open at bernheim.org and ends on Wednesday, Feb. 13. Bernheim will announce the chosen name on Valentine’s Day.

Berry said eastern golden eagles are thought to mate for life, but we do not know how or if they migrate together to Bernheim Forest in the winter. If this ends up being a breeding pair Bernheim can learn how a pair of golden eagles interact during migrations, at Bernheim Forest, and on their breeding grounds in Canada.

He called the research opportunity extraordinary for a conservation organization like Bernheim and pointed to Bernheim’s size (16,137 acres) as the reason why Bernheim Forest is a winter destination for several eastern golden eagles.

Berry expects the golden eagles to be at Bernheim through early March and then head north to their summer nesting grounds in Canada. The data Bernheim collects is being shared with others in the golden eagle research community, working together to expand the knowledge and protection of eastern golden eagles.

“This research will help inform international conservation practices. We are studying their migration stopover locations and the habitat these raptors require on their journey to Bernheim from Canada,” said Berry. “International efforts are required to protect eastern golden eagles, as with many species of birds that migrate to Bernheim.”

“The data collected and the knowledge we gain will be fundamental to the preservation and protection of this species,” said Wourms. “Eagles are an umbrella species, meaning that because of their large habitat requirements and their spot at the top of the food chain, their protection positively impacts all wildlife. In this time of rapid land development, habitat loss and changing climate, scientific research of this nature is critical.”

According to Wourms, eastern golden eagles found in Kentucky during the winter are distinct from the more abundant population found throughout the western United States. These birds have minimal interaction, if any at all, with the western population.

“We are thrilled to watch and learn from these two eastern golden eagles that appear to be companions. We will learn more as we track their movements,” he said. Wourms called the timing appropriate given the upcoming Valentine’s Day holiday.

The public can follow the golden eagle research project at bernheim.org/golden-eagle-research.  Regular updates will be made as the team at Bernheim follows the journey of the two eagles.

Wourms thanked the Beckham Bird Club and private donors for funding this important research and continuing Isaac W. Bernheim’s legacy of conservation. He called a research project of this magnitude very fitting in light of Bernheim’s 90th anniversary.

“Ninety years ago, Isaac W. Bernheim gave us a giant gift — thousands of acres of protected land where people can connect with nature and where plants and wildlife, including golden eagles, can thrive,” said Wourms. “This year we are celebrating the gift of this giant forest in giant ways.”