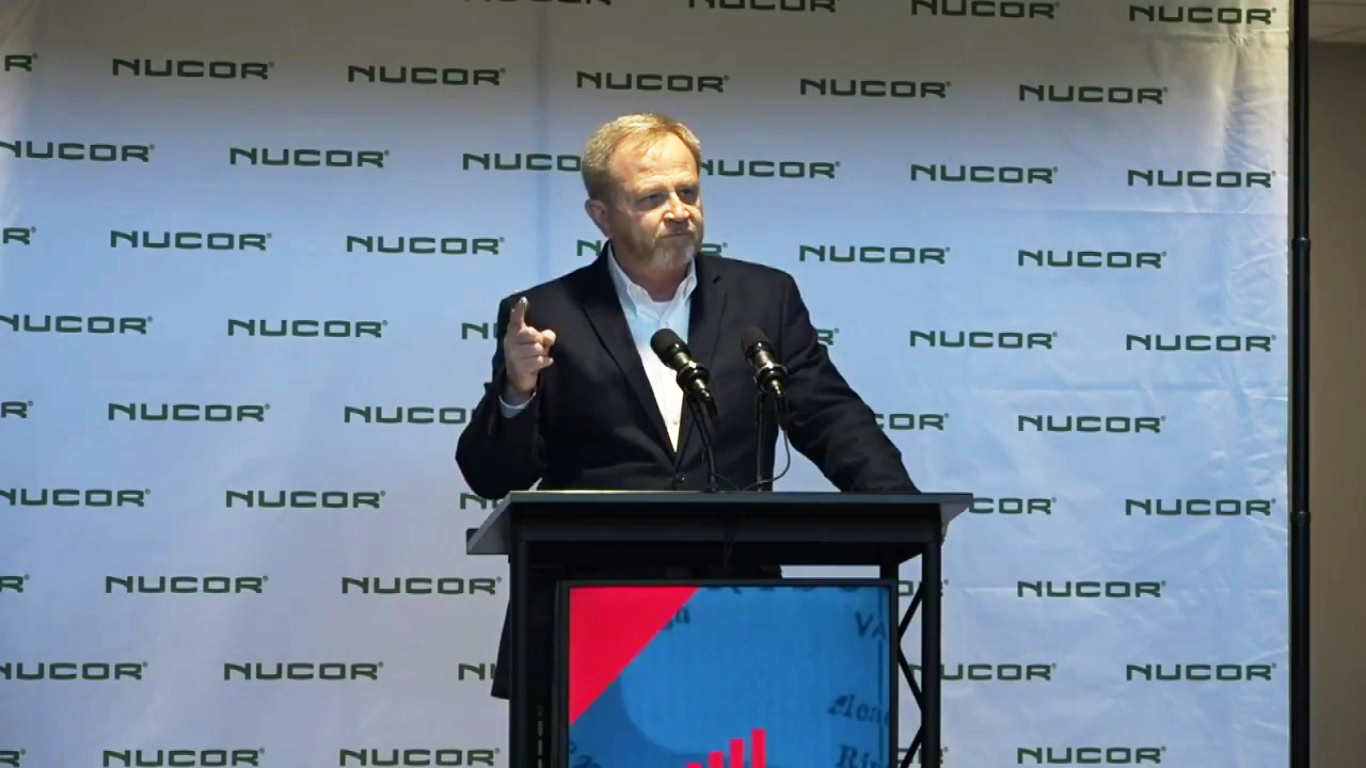 BRANDENBURG – The announcement that America’s largest steel producer plans to build a $1.35 billion steel plate manufacturing mill in Brandenburg is a great example of how Kentucky’s electric cooperatives are a key player in the state’s economic development, said Chris Perry, president and CEO of Kentucky Electric Cooperatives.

“The co-op mission is to improve the quality of life in the communities we serve,” Perry said. “The decision by Nucor Corp. to build this plant in the Buttermilk Falls Industrial Park served by Meade County RECC and Big Rivers Electric affirms that mission and is the latest example of how co-ops are ready to power Kentucky’s economy.”

Gov. Matt Bevin joined executives from Nucor Corp. at the announcement, calling the investment both an immediate and long-term economic development achievement, creating more than 400 well-paying, full-time jobs in the coming years and ranking as one of the state’s largest-ever single investments.

“Nucor is a proven, longtime corporate citizen in Kentucky and a key partner in our world-class primary metals industry,” Gov. Bevin said. “We are grateful for the company’s decision to construct a new state-of-the-art mill in Brandenburg. This massive project will transform the region’s economy and provide high-quality jobs to Kentuckians for generations to come. Thanks to Nucor’s strong commitment to the commonwealth, we are taking another momentous step toward solidifying our reputation as America’s engineering and manufacturing center of excellence.”

The 1.5-million-square-foot facility will sit on 900 acres along the Ohio River in Brandenburg. With a production capacity of 1.2 million tons per year, the steel mill will enhance Nucor’s ability to serve customers throughout the region and meet needs for the company’s customers nationwide. Full-time positions at Nucor will pay an average annual wage of $72,000, and will include equipment operators, production specialists, safety and environmental technicians, engineers and office support staff. Nucor executives anticipate construction will begin by year-end with the facility opening by 2022. The project could create as many as 2,000 construction jobs.

“This is a huge economic development milestone for our region,” said Marty Littrell, President of Meade County RECC. “Meade County RECC, its board & Big Rivers Electric have actively been working along with the Kentucky Cabinet for Economic Development to attract large industrial development projects that would benefit our entire cooperative member system. Today’s announcement is a testimony to the ambitious strategic goals we established to best benefit the communities we serve. It’s a proud day for Meade County RECC, Big Rivers and the community.”

In making the announcement, John Ferriola, chairman, CEO and president of Nucor, thanked both government officials and Big Rivers Electric.

“The new plate mill will grow our company’s already significant presence in Kentucky. With this announcement, Nucor is currently investing more than $2 billion in our Kentucky operations,” Ferriola said.

“We owe huge thank you to Nucor for entrusting Brandenburg and Meade County with being the home of this hugely important project,” Pace said. “The mill’s announcement today further underscores the years of foresight and preparation by our board, city and county leaders, utility partners and the Kentucky Cabinet for Economic Development. Collectively we’ve worked to establish Buttermilk Falls Industrial Park and advance it over the years with infrastructure, utilities and due diligence that made it desirable for a great partner like Nucor.”

To encourage the investment and job growth in the community, the Kentucky Economic Development Finance Authority (KEDFA) in a special meeting today preliminarily approved the company for tax incentives up to $30 million through the Kentucky Business Investment program. The performance-based incentive allows a company to keep a portion of the new tax revenue it generates over the agreement term through corporate income tax credits and wage assessments by meeting job and investment targets.

Additionally, KEDFA approved Nucor for up to $10 million in tax incentives through the Kentucky Enterprise Initiative Act (KEIA). KEIA allows approved companies to recoup Kentucky sales and use tax on construction costs, building fixtures, equipment used in research and development and electronic processing.

Nucor has two performance-based incentive agreements from KEDFA for the current expansions in Gallatin County.