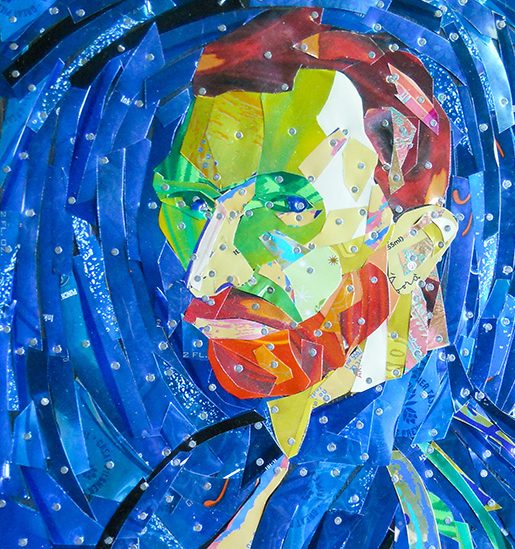 lentiful potters, photographers painters. Gobs of glass, jewelry and fiber artists. Many mosaic and mural makers—and lots more “makers” of all kinds. There are boundless sources of inspiration for the creative and crafty across Kentucky.

Some, like Kathy Conroy of Pleasureville, fully embraced their artistic passions once their hectic first career and parenting years passed. Conroy, a Shelby Energy consumer-member who’s lived in Kentucky since she was 16, retired from working as a graphic artist when she was 62 to pursue scratchboard art full time. She’d always been artistic, and after high school regretfully gave up a scholarship opportunity to attend art school in Nashville.

But in 1998, when her youngest daughter was in high school, she enrolled in the Art Institute of Cincinnati, studying graphic art. Eventually she was hired to work for the Breeders’ Cup as a graphic designer, working full time until December 2017.

About a decade ago, she fell in love with scratchboard art. In this medium, a Masonite backing, often 6 by 6 inches, is covered with a thin layer of clay, then India ink. Using fine scalpels, tattoo needles and other scratchboard tools, Conroy delicately etches images of animals and people in dizzying detail, revealing the lighter layer of clay beneath the ink. Color also can be added with special inks and paints.

Conroy creates custom commissions and pieces to sell at art shows, sometimes finding it hard to let them go. Each piece routinely takes 25 to 30 hours to complete. One ambitious project took three months.

“I fall in love with them; they’re so much a part of me I don’t want to sell them!” she says.

Conroy also holds art exhibits and teaches workshops. Her future goals include becoming a master scratchboard artist and to have her own one-woman exhibit appropriately titled “Scratching the Surface.”

At Tater Knob Pottery and Farm, visitors not only get to purchase pottery but to see it being made while having a great cup of coffee, and being greeted by a menagerie of cats and dogs and the infectious wit and cheer of co-owner Sarah Culbreth.

David learned pottery through his parents and a work-study program, while Sarah, Jeff and Samantha trained at Berea College’s ceramics apprenticeship program.

Though each person’s pottery style is different, the kiln-fired pottery is distinctive, Culbreth says. Most often, they use red clay along with their original six different glazes to create items like pitchers, mugs, vases, bells and place settings.

Culbreth says she most enjoys translating an idea in her mind to the clay in her fingertips, and hasn’t tired of it yet.

“The ultimate moment is to feel cool, slippery clay in my hands on my potter’s wheel,” she says. “It’s the love of my life … This clay is just an incredible thing to put in your hands.”

Tater Knob hosts an annual Christmas event each December and its 40th anniversary celebration is June 1, 9 a.m. to 5 p.m., at the farm (details at Facebook: Tater Knob Pottery and Farm).

An upcycler extraordinaire, Robert Love takes the humble aluminum can and transforms it into art.

The Bowling Green resident and Western Kentucky University graduate with a bachelor’s degree in fine art and a master’s degree in art education, is a (mostly) retired art teacher who grew up in an artistic family. His father was a professional photographer who dabbled in furniture making and his great-grandmother excelled in watercolors.

In an art form he calls “recycled brushstrokes,” Love’s palette is found in boxes of aluminum cans sorted by color for easy access while working on his metal mosaics. He snips out segments of the cans with scissors and nails them to plywood with tiny nails to create detailed images—a U.S. or Kentucky map, horse, fish, car or even Johnny Cash.

He jokingly says he drinks all the beverages from the cans, but in truth friends and family also save some for him. Love says he’s glad the canned beverage market has expanded to include sparkling water, energy drinks and lattes that add to his color choices.

“The hardest colors for me to get are yellows and purples and orange,” he says. “I can get them; they’re just not as plentiful.”

He’s had a handful of public exhibitions, and his work can be found in public art projects and galleries statewide; and pieces are on display in restaurants, businesses and a college in South Carolina. He also teaches art twice a week at WKU.

An artsy upbringing coupled with a competitive spirit and keen imagination led Mike Maydak to pursue a career as an illustrator and art teacher, with whimsical and colorful artwork often rooted in fantasy.

Maydak, a Covington resident, says his mother was an illustrator/painter who did commercial art projects.

“I wanted to be a writer, but it didn’t really pan out,” he says. “But I was always good at drawing.”

After a childhood enjoying comics and coming up with his own ideas, Maydak graduated from Northern Kentucky University with a bachelor’s degree in fine art in drawing.

In college, he says he thought some of his peers were better artists than he was, so he homed in on his own perceived weaknesses, drawing all the time and committing to improvement. Early on in his career, he attended comic book conventions in Chicago and elsewhere, observing how pro illustrators showcased and sold their work.

Maydak says his style is influenced by both graffiti and comics. He illustrated The Blackbeard Legacy, a comic book miniseries, and also created Slimbone, a nationally syndicated comic strip. Following a successful Kickstarter campaign, his first book, an illustrated travel guide to the fictional world of Isa, is slated to be published this summer.

Maydak, who also teaches design drawing at Cincinnati State College, finds inspiration in silent moments, either starting with a drawing and letting it guide the narrative or thinking of an idea to flesh out with art.

“Someone brought the idea up that boredom is essential to creativity and it’s so true because you have a chance to reset your brain and flush everything out, almost meditation in a way,” he says. “You get those creative juices flowing.”

Berea is the official folk art and craft capital of and the center boasts the works of more than 800 Kentucky artists in special gallery exhibits and for sale, along with special events and Saturday demos. Free admission. Also visit the Artisan Village on and around North Broadway in Berea, with abundant studios, galleries shops. .

Art Inc. Kentucky Artists’ Village,Lexington, (859) 231-0054 ext. 1023. This new development where artists will both live and work is a project of Art Inc. Kentucky (www.artinckentucky.org/). With 14 artist-owned homes with attached working studios, the village is being developed near downtown Lexington along Race, Third, Warnock and Goodloe streets along with a retail gallery, park and art studios.

Paducah Arts Alliance and Lower Town Arts District, https://www.paducahartsalliance.com.In addition to Paducah’s extensive floodwall mural chronicling local history, the Paducah School of Art & Design(http://psad.westkentucky.kctcs.edu/) and the famed National Quilt Museum, Paducah been designated a UNESCO Creative City, a testament to its thriving arts community. The Alliance sponsors an artist in residence program, linking artists with the community via exhibitions, workshops, public lectures and collaborative projects with local artists. The Lower Town Arts District is full of galleries and and holds and music festival.

Here is a sampling of artists living and working across the creative commonwealth. For more information about a wide range of Kentucky artists, their creations and contact information, visit the Kentucky Crafted Directory.

Marianne Brown Pottery, Lawrenceburg. Brown has about 160 custom designs she imprints onto the surface of her distinctively colored pottery creations, featuring fleur de , equine and ancient designs. Her work can often be found in galleries, gift shops and at art festivals throughout the Ohio Valley. (502) 604-8220.

Audrey Schulz Horses, Louisville fiber artist who creates soft sculpture horses and zoo animals. Some of her works have gone to the White House and were featured on the Home and Garden Television Network. (502) 896-4853.

Sharon Tesser, Louisville textile mosaic artist who creates still lifes, landscapes, animals portraits out of intricate and colorful textiles. She also has a line of wearables and home decor.  (812) 537-4924.

Theresa Shelton, diverse Vine Grove oil painter and Nolin RECC consumer-member whose works are found in galleries across Kentucky and elsewhere. She has studios in Florida and Kentucky, and her art features many rural Kentucky scenes.

Lacy Hale artist whose exterior murals can be found in Jenkins, Lexington Hindman and soon to be in Harlan and Corbin. Her interior murals are in several local schools, and another project is underway at Hazard ARH Hospital.

Ed Hamilton, Louisville. sculptor who, among many other works, has created a national memorial “The Spirit of Freedom” in Washington, D.C. (502) 587-7709.

Karen Scates, Scates Currie. Woodburn of miniature wood instruments, furniture, butterflies and more, some wearable as pins and jewelry. Scates is a consumer-member of Warren RECC. (270) 796-7228