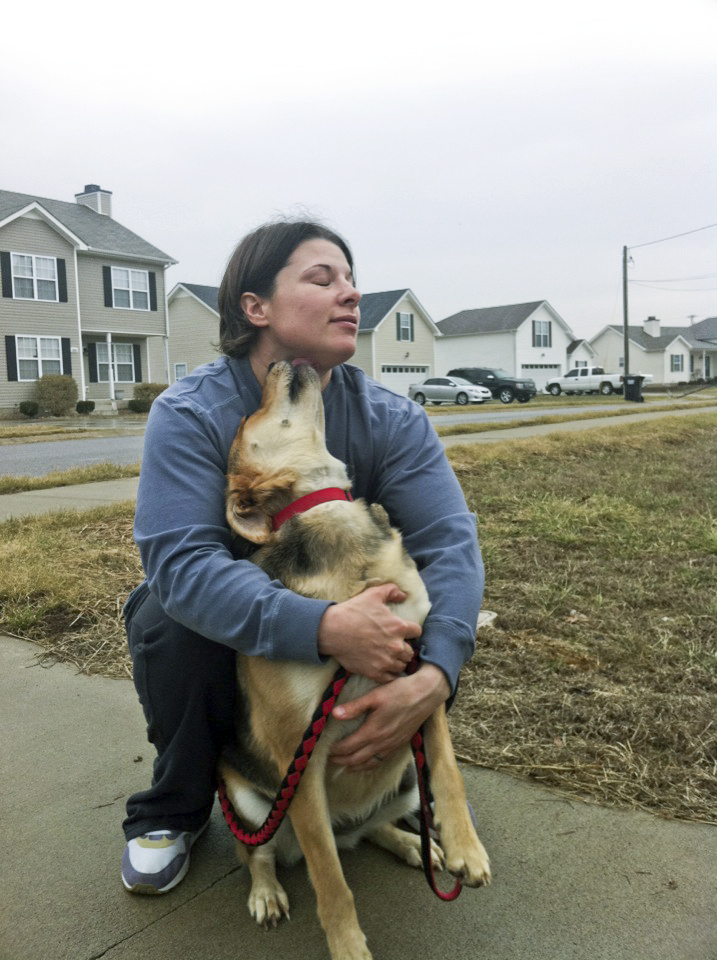 Many of you know my adopted dog Ella’s story: she previously belonged to a military couple stationed at Fort Campbell. When they were deployed to Iraq, they had little time to prepare and nowhere to put Ella but in a local shelter. Though they left money for her care, the shelter serves three counties and couldn’t have kept Ella there forever.

Ella was lucky, but that’s not the case with many military pets. With all the stories about family and friends who are left behind when a soldier is deployed, we forget the others that are also left behind: the pets.

Sometimes that pet can be left with a spouse, friend, or family. But what if there is nobody to leave a beloved pet with? Kentucky has many high-kill shelters, and sadly that’s where many military pets have ended up.

Until now. Thanks to a group called Guardian Angels for Soldier’s Pet—GASP—those serving in the armed forces now have the option of having their pets fostered until they return home.

“I really didn’t want to foster, I knew I’d get too attached, but in two weeks I had my first foster dog.”

That’s how Miché Branscum got started with GASP last year. She saw a news program about a dog being reunited with his soldier father, and called GASP to see how she could help. Today, she not only fosters dogs at her home in Anderson County, but is the Kentucky community outreach liaison for GASP’s national headquarters in Texas.

Miché explains why it’s such a difficult situation for military pets.

“The military can’t wait for a soldier to find a home for their pet—and sometimes a soldier only gets a two-day notice of deployment. That’s why this group was started. And this way the soldier still has contact with their pet.”

Miché smiles broadly when she talks about her first foster dog, Leonidis, or Leo as she calls him.

“Leo was a bit of an emergency situation. His first foster home wasn’t working out, so I was asked to keep him for a couple of days. Well, it was love at first sight, and two days turned into six months.”

It was indeed hard for Miché when Leo’s father was able to take his dog back. But Miché gets “visitation rights” with Leo, even spending part of last Christmas with him.

Miché has a particular empathy for military pets. When her husband, Kevin, worked in Afghanistan in a civilian capacity, it was simple enough for Miché to take care of their dog, Winston.

“But think about it,” she says, “a lot of soldiers are single, they don’t have a spouse, and maybe their base is far from family and friends. So where do these pets go?”

A lot of military pet dogs and cats are on the Fort Knox and Fort Campbell bases, and the surrounding shelters fill to capacity when a major deployment occurs. Part of Miché’s volunteer work consists of visiting these bases to make soldiers aware of GASP.

Miché explains the process: a soldier meets with prospective foster parents, who have been prescreened by GASP. Depending on the pet’s needs and the foster’s situation in terms of space and other pets, GASP matches the pet with the best foster home. However, the soldier being deployed gets the final say over who will foster the pet.

“And what’s great about that is the soldier can maintain contact with his or her pet,” Miché says. “Most fosters send pictures, videos, and e-mails to the parent—for the soldier, it’s like hearing from their children.”

Nancy, a foster parent for GASP, takes it a step further. Nancy, who asked not to give her last name, fosters from her home in Franklin County. Her foster dog, a schnauzer named Bailey, “sends” e-mails and care packages to his soldier mother, who is obviously grateful for both the care packages and Bailey’s foster:

“I could not have picked a better home for my dog, not just for him but for me. I truly enjoy the stories about his antics, and I really appreciated the pictures.”

But Nancy seems to get just as much out of being a foster.

“When I first learned about GASP, I thought, wow, I have never in my life thought about these pets being an issue. I have thoroughly enjoyed doing this. And it appeals to my sense of patriotism. I’m doing something for this soldier that keeps her free from worry—this dog is a big part of her life.”

Nancy says the way fosters are arranged are “the ideal situation. I’ve fostered for other groups, but I like knowing my foster dog already has a home.” Bailey spent several weekends with Nancy before his mother was deployed, so the transition was much easier on everyone involved.

“It’s an incredible program,” Nancy says of GASP, “and it’s something people don’t think about. We watch families reunite and don’t see the soldier who’s not married, who doesn’t have children. They’ve had to entirely dismantle their lives, and fostering gives them one less thing to worry about.”

Founded five years ago, GASP has only been available in Kentucky since last year. Volunteers are still being sought, so Shawna Michaud has the distinction of being the organization’s state director for both Kentucky and Tennessee. Shawna is a military spouse also, and knows the heartbreak some soldiers have had to go through.

“These pets are family members. When soldiers come home, those pets are their biggest supporter. I’ve fostered five dogs, and taking care of these pets is really rewarding. I feel like I’m giving back by keeping these pets out of shelters.”

Shawna also helps dogs that aren’t initially in the GASP program. She gets several referrals from humane societies holding soldiers’ pets. When the shelter is full, they contact GASP to foster a military pet.

One dog ended up in a shelter when the foster home a soldier had privately arranged for didn’t work out. The humane society took the dog in, contacted both GASP and the soldier, and the dog was placed with a GASP foster.

Currently, there are 11 foster homes in Kentucky, and Miché is hoping to recruit more. Even with plans to bring more soldiers home from overseas, Miché says there will always be a need for fostering military pets. (Contact Miché at gasp.outreach.ky@gmail.com or 606-305-8982.) A lot of pets belong to members of the National Reserve or National Guard—even if they are not deployed overseas, large pets cannot live on military bases.

Miché admits it’s hard to give up a foster pet, but at the same time loves knowing she’s relieving at least part of a soldier’s stress. “It’s awful for the soldiers who don’t know what happened to their pet.”

And she tears up when she talks of returning her first dog, Leo.

“I cried all the way to Fort Knox. Leo was like most pit bulls, extremely loving—he’s a great ambassador for his breed.

“But when Leo saw his dad, I knew it was the best thing I’d ever done.”