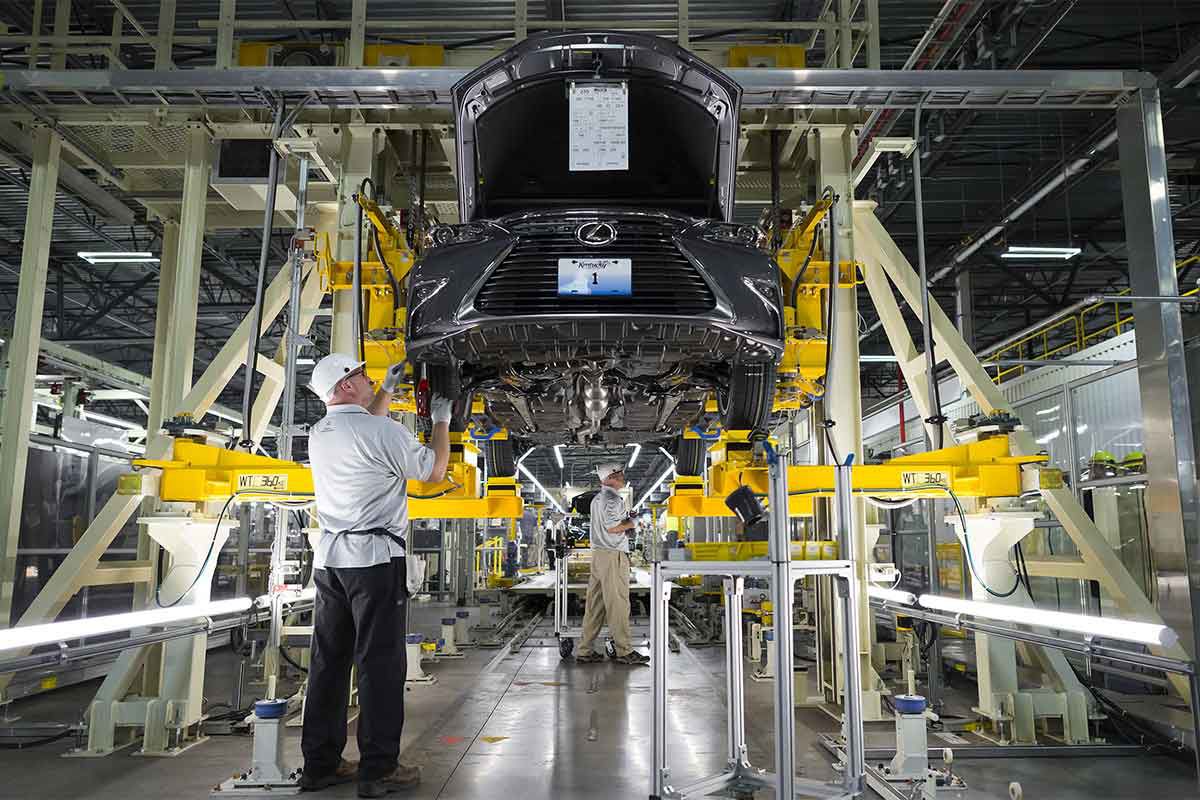 Call it a homecoming.

When Toyota introduced Lexus to the U.S. market in 1989, the Georgetown plant—its first stand-alone vehicle manufacturing facility in America—was just in its second year of producing the Camry.

Fast forward 26 years and that same plant is celebrating the start of U.S. Lexus production. On October 19, 2015, at a ceremony fit for a luxury brand king, the first-ever U.S.-produced ES 350 was unveiled before several thousand proud team members in Georgetown. And, just like a newborn foal at the nearby horse farms in central Kentucky, the newcomer was brought into the world with plenty of TLC and hope for a bright future.

“This is really a proud moment for us and brings us full circle,” says Wil James, president, Toyota Motor Manufacturing, Kentucky Inc. “To be the first wholly owned plant, building the number one best-selling car in America, the Camry, for 13 years in a row, and then to be selected to build the first Lexus is truly a tribute to our team members.”

For the past two and a half years, the Kentucky plant—Toyota’s largest in North America—has been gearing up to make the ES 350, Lexus’ best-selling sedan in the U.S. In all, $360 million was invested toward a new dedicated assembly line, adding 750 new jobs. Total capacity for the new line will be 50,000 vehicles.

“Localizing Lexus production is in line with our North American production strategy, and is rooted in our philosophy of building cars where we sell them,” says Toyota North America CEO Jim Lentz. “The Kentucky plant is known for being one of the top vehicle manufacturing facilities in the world. With our talented team in Georgetown building our popular ES 350, we’re positioned to better serve our U.S. customers now and well into the future.”

To prepare to build the Lexus sedan, team members underwent 1.5 million hours of training. This included trips to Japan for many to learn the art of Lexus craftsmanship. It also meant spending time behind the wheel of an ES, driving it on Kentucky roads, and dealership visits to gain an understanding of customer expectations and customer service.

Mike Bridge, a 13-year team member at the Kentucky plant and now assembly manager on the Lexus line, knew things were a little different from the get-go in regard to training. “One of the first things we did was purchase 22 brand-new ES 350s from a local dealer. We brought them in-house, and repeatedly tore them down into 2,000 pieces and built them back up. We learned every facet of this vehicle, how to put it together the right way.”

With the addition of the Lexus units, the Kentucky plant will have the capacity to build more than 550,000 vehicles a year. Total employment now stands at more than 7,500. In turn, this is welcome news to Kentucky Governor Steve Beshear. “This is an important day for the Commonwealth. For Lexus to have the confidence in our Kentucky work force to build this magnificent car speaks volumes. These additional 50,000 vehicles are further proof that the state of Kentucky is a great place to do business for the automotive industry.”

As part of the celebration of the ES’ arrival, Toyota is matching the 50,000 production-unit number with $50,000 in donations to a pair of local nonprofits: Horses and Hope, a statewide group that provides mobile cancer screenings and education at Kentucky’s four Thoroughbred racetracks for fans and track workers; and Old Friends, a Thoroughbred retirement center in Georgetown that cares for retired racehorses, including 1997 Kentucky Derby winner Silver Charm. Each organization received $25,000.

The addition of the Lexus plant to the Kentucky campus bodes well for the whole operation, and, in fact, has already made an impact, James says. “Before we were chosen to build the ES, we put a plan in place to show we were capable of building Lexus before Lexus would consider coming here. That strengthened us across our plant, and as a result, we’re building better cars overall.”