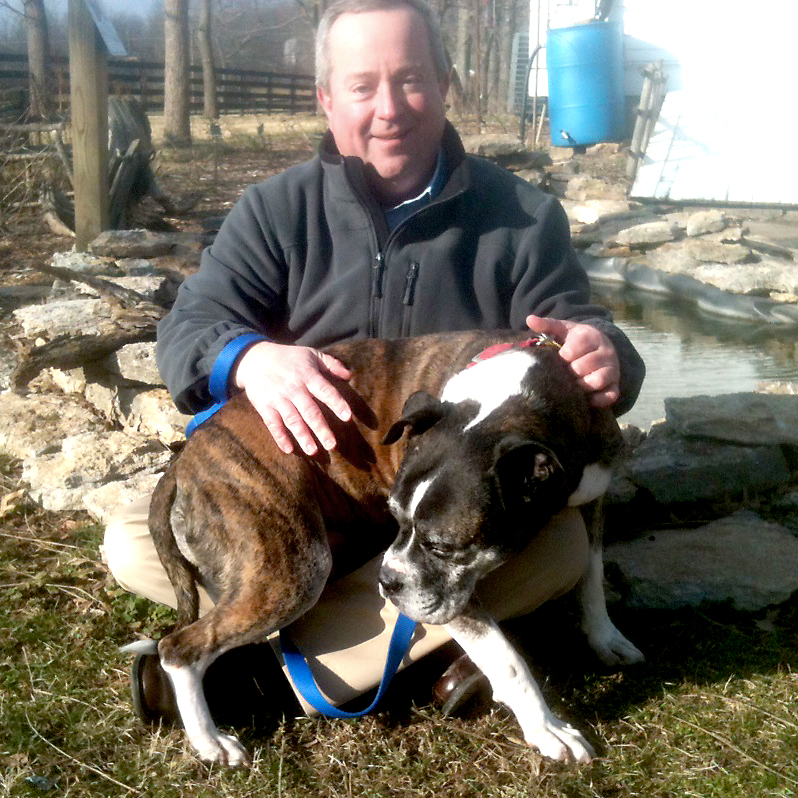 In the last Creature Comforts column, you read about Blake, a shelter dog who had everything going against him: he was black, a pit bull, and going kennel-crazy. With a lot of love and support from a group of caring people, he beat the odds and got his happily-ever-after ending.

So to continue the theme of supposedly “unadoptable” dogs, in this column we meet Huck, an American staffie who spent a year in a shelter. He was another dog I became very attached to: he always had a smile on his face when I came to walk him. Despite a year of life in a shelter, he was always cheerful and full of life, so I gave him the title of Happiest Dog in the Shelter. He was an owner turn-in, supposedly for dog aggression, but I never saw it.

Huck, though, was another dog who had a lot going against him: his age, breed, and size made finding him a home very difficult. But with his happy mental state, I tried not to worry too much.

But then things changed.

When the shelter became overcrowded, a difficult decision was made to start putting dogs down for space. I panicked because Huck was first on the list due to his length of time in the shelter. How was I going to get this dog out of there? I knew what a wonderful dog he was: the question was how to find someone to meet him and discover what a treasure he would be as a pet. Dogs like Huck get passed by all the time—I had to find a way to draw attention to him.

As I did with Blake, I hit Facebook as hard as I could: I told his story, posted pictures, sent out at least 100 shares on him. I didn’t have much luck at first, and time was running out.

I didn’t know it at the time, but this was when a true love story began.

I got a message from a man named Nick Raley in Shepherdsville. His inquiry about Huck was a bit tentative: he was still mourning his boxer who had died, and he wasn’t sure he was ready for another dog. The story of his dog, Bunky, was heart-breaking.

“Originally, I was just supposed to babysit Bunky for a while,” Nick said. “But one thing led to another, and after a while I said, ‘Well, I guess this dog is mine.’ I had Bunky for seven years before he passed away from cardiomyopathy.

“Bunky was special. I wouldn’t have otherwise wanted a boxer, but he was such an expressive dog—I could always tell what he was thinking. When he was diagnosed, I knew my time with him was limited. He was in the hospital a lot—he also had pancreatitis and colitis—but thankfully he died at home, peacefully, in my arms.”

Obviously, Nick was torn over what to do. I explained Huck’s situation, but tried not to pressure him. As much as I wanted Huck to have a home, it had to be a good match: the last thing I wanted was for Huck to be returned to the shelter. Nick said he would get back to me.

A couple days later, I was on Facebook talking with someone who wanted to know more about Huck, when Nick interjected with the message I had so hoped for:

“You can stop posting Huck. He’s coming home with me.”

First came shock, then tears of joy, then the voice of reason: I arranged for a meet-and-greet between the two, reminding myself that we still had some hurdles. It might not be a good match, what if Nick’s application wasn’t approved, maybe they wouldn’t even like each other.

None of the above. It was love at first sight, and when they left the shelter, I don’t know who was wearing the biggest grin, me, Nick, or Huck.

Nick kept me crying for days afterward. He sent pictures of Huck lying on a couch instead of concrete, watching television instead of looking out a cage door. And I cried because Huck had filled a hole in Nick’s heart, and because Nick took a chance on the most deserving dog I knew.

Nick has since been extremely kind in sharing custody of Huck with me. On a recent visit, I asked Nick why, of all dogs, he was drawn to Huck.

“When Bunky died, I did not want another dog, I loved Bunky so much. People kept pushing me to get another dog, but after 11 months, I still didn’t think I was ready.

“Then I stumbled across a video of Huck on the Internet, and it struck me how much he looked like Bunky. I kept watching and noticed he didn’t pay much attention to other dogs—he didn’t seem to be the aggressive dog the shelter thought.

“And then I learned that he might be put down. I couldn’t let that happen.

“Actually,” Nick laughed, “I didn’t know I was ready for another dog until I met Huck. And when I found out what a desperate situation he was in, that sealed it for me.”

Nick, a lawyer with the Commonwealth’s Attorney office in Bullitt County, did this adoption the right way: he didn’t adopt a dog on impulse, he gave it a lot of thought, asked questions, and got to know the dog. Most important, he made sure he could give Huck the kind of home the dog needed and deserved. Nick ducks the credit for being a good adopter, but does admit it made the transition easier for both of them.

“There really wasn’t any adjustment period,” he said, “Huck just sort of moved right in. He’s very obedient, very perceptive, though I did have to give my recliner up to him. Maybe it’s because he had to stay in one place for so long, but he wants to constantly be on the move: when we’re in the truck, he hates red lights and slow traffic, starts whining, and looks at me like, ‘Let’s go, already!’

“He’s not a replacement for Bunky, because he’s a different dog. Loving Huck doesn’t mean I can’t continue to love Bunky. And I do believe Huck loves me too. He’s got a good heart, he’s a good-spirited dog.”

Oh, how we love those happily-ever-afters.