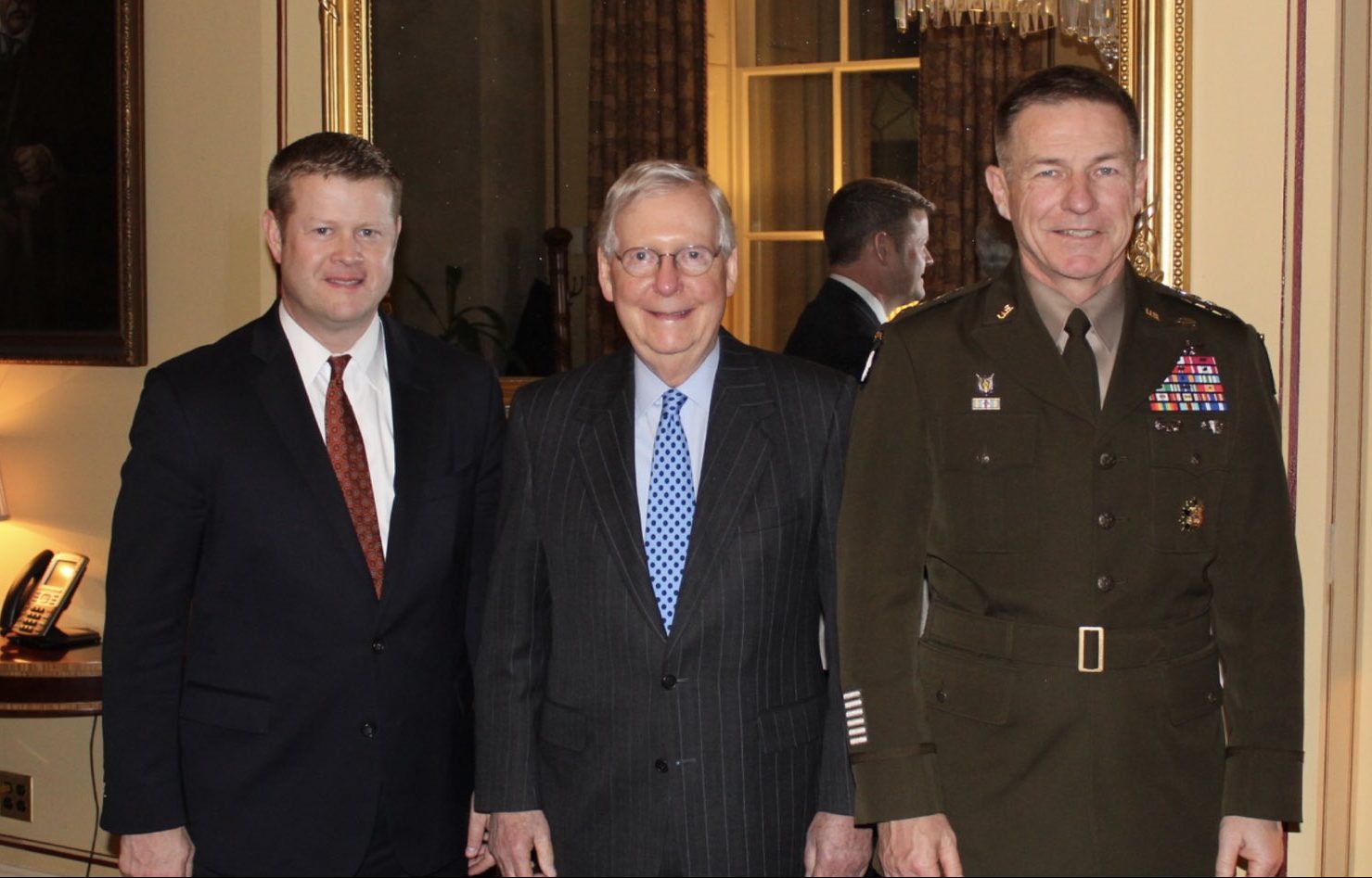 McConnell welcomed to his Capitol office the Secretary of the Army, Ryan McCarthy (left) and the Chief of Staff of the Army, General James McConville (right).

WASHINGTON, D.C. – U.S. Senate Majority Leader Mitch McConnell (R-KY), Senator Rand Paul (R-KY) and Congressman Brett Guthrie (KY-02) announced today that at their request the Department of the Army selected Fort Knox to be the home of the new corps headquarters that is urgently needed to fulfill National Defense Strategy requirements and support U.S. forces and operations in Europe.

Today’s announcement builds on Senator McConnell’s continued efforts throughout his Senate career as a member of the Senate Appropriations Committee to provide robust funding and budget stability for the Department of Defense with particular commitment to ensuring Kentucky’s defense communities and military installations receive the resources they need. Senator McConnell has secured hundreds of millions of dollars for Fort Knox infrastructure and facilities.

“Fort Knox has proven itself as a leader in our nation’s armed forces time and again, and I’m delighted to announce Secretary McCarthy and General McConville answered my call to station V Corps headquarters in Kentucky,” said Senator McConnell. “As the Army continues modernizing its force structure to counter evolving global threats, Fort Knox is best choice to meet our urgent national defense needs. With its unmatched level of community support, Fort Knox will offer V Corps a warm welcome.

“Throughout its 100-plus years of distinguished history, Fort Knox has adapted to complete many high-priority missions. I’ve delivered substantial federal investment to help build facilities and infrastructure at Fort Knox, ensuring there is no installation better prepared to stand-up this headquarters,” Senator McConnell continued. “As Senate Majority Leader, I consistently raise Kentucky’s priorities with military leaders, including by hosting Defense Secretary Mark Esper last year to meet with the Knox Regional Development Alliance, and I’m glad they recognized the great potential of this community. I congratulate Fort Knox’s leadership and the KRDA on this announcement, and I look forward the V Corps’ arrival in the Bluegrass State.”

“As a staunch defender of Kentucky’s military installations and a fierce advocate for our nation’s armed forces, I am thrilled to announce the selection of Fort Knox for the newest Army headquarters and look forward to welcoming the troops to our beautiful Commonwealth,” said Senator Paul. “From working to protect Fort Knox’s energy independence capabilities, to advocating for service members at all of our military bases to be counted correctly by the census, I’m proud to be a voice for Kentucky’s soldiers, their families, and their communities.”

“I am proud to announce that Fort Knox has been selected for this new three-star command,” said Congressman Guthrie. “I personally spoke to Defense Secretary Mark Esper about their application last week. Fort Knox and the surrounding communities have the assets and the attitude to host these new soldiers and their families. Kentucky is a great place to be a soldier, and I look forward to welcoming the over six hundred troops that will be coming to Fort Knox as soon as October 2020.”