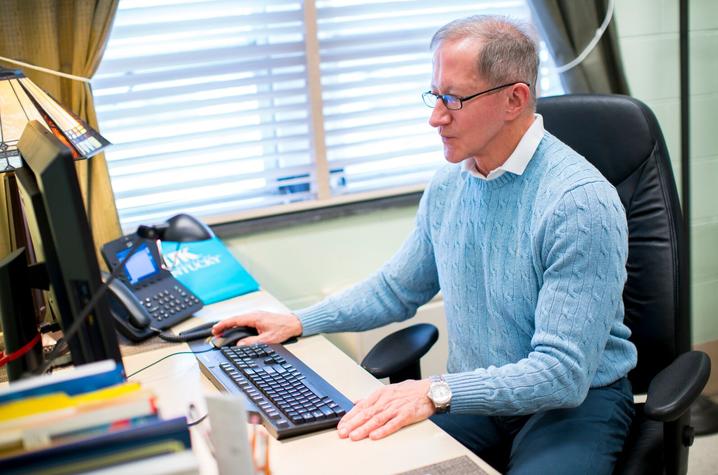 Guskey is a professor of education psychology at UK and is currently studying the way teachers grade, a popular topic in the news and education policy circles as more schools consider standards-based grading. Photo: UKNOW

LEXINGTON (March 20, 2017)—How effective are traditional grading practices in the classroom? Tom Guskey tackles this and other current issues in education through his research at the University of Kentucky College of Education.

“I think everybody has a sort of in-born sense of curiosity and becoming a researcher just allows us to formalize that,” he said.

Guskey is a professor of education psychology at UK and is currently studying the way teachers grade, a popular topic in the news and education policy circles as more schools consider standards-based grading.

Grading practices used in most schools today aren’t based on proven effectiveness from research, but rather on tradition, Guskey said, simply because it’s always been done that way.

“As we learn more about this, we find that there’s probably no area in all of education where the gap between a knowledge base and practice is greater than in the area of grading,” he said.

Guskey comes at the issue from both standpoints of educator and researcher. In addition to more than 30 years of teaching at UK, he has taught middle school students and served as an administrator in Chicago Public Schools. His research background is just as robust. He was the first director of the Center for the Improvement of Teaching and Learning, a national educational research center. He has also served on national policy research teams and task forces and is a fellow in the American Educational Research Association.

Now, Guskey is working to minimize the gap between research and practice, helping schools in Fayette County and across Kentucky improve their grading policies with evidence-based practices.

Standards-based grading is one method he helps implement. It measures a student’s proficiency on specific course objectives, breaking subject areas down into various components.

Guskey’s research shows that basing a student’s grade on their relative standing among classmates—otherwise known as grading on the curve or norm-based grading—can have negative consequences. These include detrimental effects on students’ relationships with their teachers and peers. In contrast, standards-based grading is centered around learning criteria.

“So if a child has particular strengths or weaknesses, parents know where to intervene, and how they intervene, to really help the child in better ways,” he said.

In addition to working with Kentucky schools, Guskey and his team have partnered with the Association for School Improvement, the Association for Curriculum and Development, the National Association of Elementary and Secondary School Principals, and the U.S. Department of State’s Office of Overseas Schools. He also collaborates with faculty members from colleges across campus.

“There is a colleagueship that I love here,” Guskey said. “The idea that we, as faculty members, support one another.”

Another favorite aspect of his research? Witnessing its impact.

“When we become better at communicating with parents and guardians and families about what the students are doing in school…it just does remarkable things in a community,” he said.

Watch the video above, produced by Research Communications, to learn more about why Guskey is so passionate about his research.