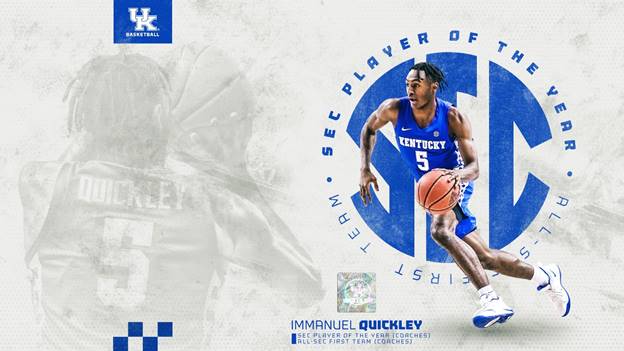 BIRMINGHAM, Ala. – After winning the Southeastern Conference regular-season cro­­wn by three games, the Kentucky men’s basketball team headlined the league’s end-of-the-season awards with Immanuel Quickley winning SEC Player of the Year and John Calipari earning SEC Coach of the Year distinction, as picked by the league’s coaches.

Four Kentucky players and Calipari were decorated with SEC honors following a 26-5 regular season that included a 15-3 league record, an 8-2 record on the road and a top-10 national ranking.

Quickley was joined on the All-SEC First Team by Nick Richards while freshman guard Tyrese Maxey made the All-SEC Second Team. Maxey was also tabbed to the SEC All-Freshman Team.

Ashton Hagans, the 2019 SEC Co-Defensive Player of the Year, made the SEC All-Defensive Team for a second consecutive season. Richards joined him on the five-man team.