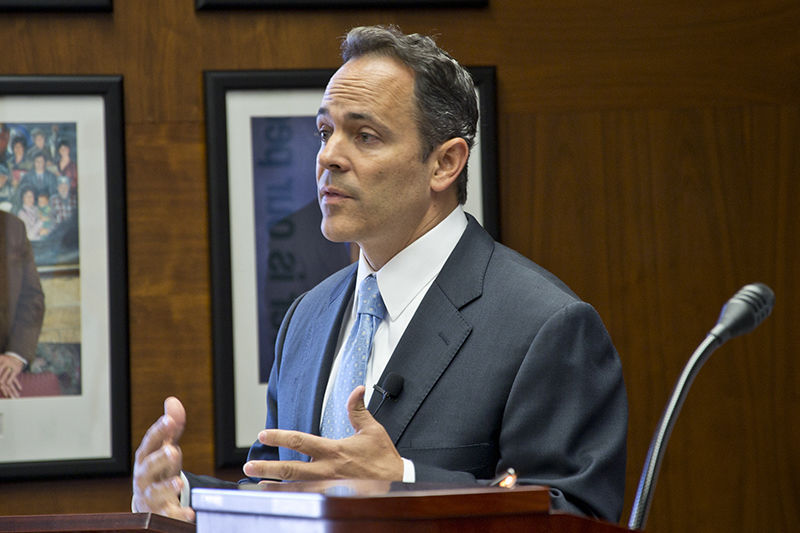 FRANKFORT — A few years ago, when I was a frequent panelist on KET’s Comment on Kentucky, on the year-end edition of the show, I would bemoan how difficult it was for television reporters to relay the awful condition of Kentucky’s public pension systems.

As a result, my self-critique was that I did not adequately cover that ticking time bomb of a story, despite the ever-increasing concerns of retirees, citizen watchdogs, and industry analysts.

One reason that the broadcast media gave the snowballing pension crisis relatively little attention is that news outlets have a limited amount of airtime and generally pay more attention to action than inaction.

The pension crisis was rarely on the front burner.

In his joint State of the Commonwealth and Budget Address last week, Governor Matt Bevin (R) said paying down Kentucky’s underfunded pensions is “the heartbeat of this entire budget.”

“Everything else we care about, including things that I want, things I campaigned on, things I’d like to see, things that many of you in this room and in this body would like to see, we cannot afford until we get our financial house in order,” Bevin told lawmakers in the House chamber.

The Republican’s two-year budget proposal earmarks $1.1 billion for the pension systems, while imposing $650 million in cuts to state government “across the board.”

As he pledged during the gubernatorial campaign, Bevin’s budget begins the phasing out of Kynect, the state’s health benefit exchange.

Bevin acknowledged the state has a long way to go to make the pension systems whole, about $35 billion.

Rejecting a House Democrat proposal to make pension payments by issuing bonds, Bevin said, “We cannot borrow our way out of debt, nor will we try.”

Bevin also called for an independent audit of the pension systems.

For an issue that has escaped the public spotlight for more than a decade, Matt Bevin has identified Kentucky’s pension crisis as the state’s priority.

Meanwhile, legislation on the move in Frankfort includes:

House Bill 97 is aimed at protecting the lives of infants. It would extend the amount of time parents have to surrender their baby at a state-approved safe place without facing criminal charges. Current law allows 72 hours after birth. HB 97 allows for a 30-day window. It passed the House 92-0.

House Bill 50 was approved by the House Judiciary Committee.  It would allow “public benefit corporations” to operate in Kentucky.  Such corporations would then be required to balance the interests of their stockholders with a broader public interest. According to sponsor Kelly Flood (D-Lexington), 31 states have such a law.

House Bill 278, sponsored by House Speaker Greg Stumbo (D-Prestonsburg), would increase Kentucky’s minimum wage from $7.25 to $10.10 over the next two and half years.  The bill was approved by the House Labor and Industry Committee.

Senate Bill 33 would require public high school students to learn CPR. Sponsored by Sen. Max Wise (R-Campbellsville), the bill will now be considered by the House after a 32-6 vote in the Senate.

Senate Bill 4 dictates informed consent before a woman can have an abortion in Kentucky.  The bill, sponsored by Sen. Julie Raque Adams (R-Louisville), is moving back and forth between the Senate and the House.  After the Senate passed Adams’ original bill that requires in-person, face-to-face consultation, the House amended the legislation, allowing for video conferencing as well. The Senate will now consider the amended House bill.

House Bill 54 would give families of paramedics and other emergency service personnel killed in the line of duty the same $80,000 state death benefit now provided to families of fallen police and firefighters. It is sponsored by Rep. Dean Schamore (D-Hardinsburg) and was filed following last November’s death of Jessamine County paramedic John Mackey, who died after being hit by a car while on ambulance duty.