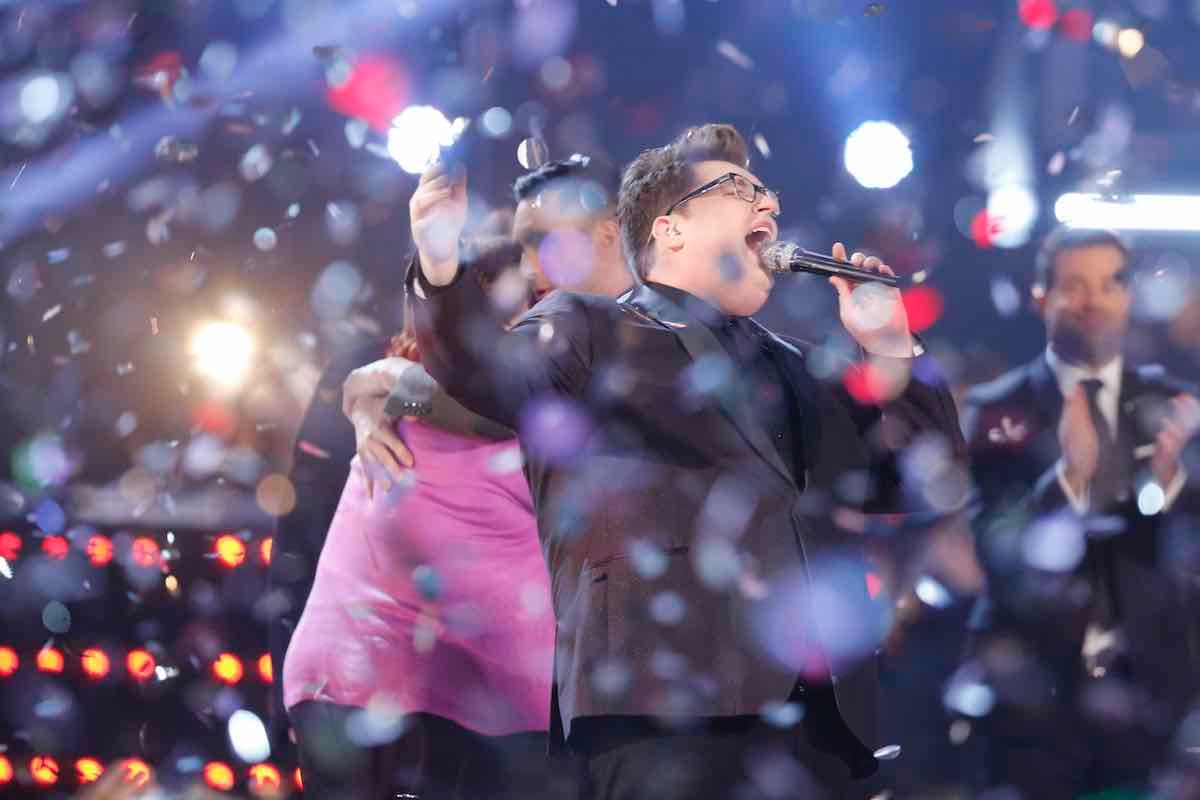 Harlan's Jordan Smith broke "The Voice" records on his way to becoming the winner of Season 9. Photo: Trae Patton/NBC

Jordan Smith may have taken the country by surprise in the past few months, but residents of Harlan County weren’t at all surprised Tuesday night, December 15,  when one of their own won the immensely popular NBC show, The Voice, and along with it a major recording contract.

“From the first time I heard Jordan sing, I knew that he had something special,” says girlfriend Kristen Denny of Pineville. “It’s been awesome to watch him do what he loves and what, I feel, he was made to do.”

Harlan County hosted a welcome home celebration for Jordan on Monday, December 21, beginning with a parade through downtown. The parade was followed by a program at The Harlan Center, which hosted several watch parties throughout the season.

At the Dec. 15 finale watch party, delighted fans held up banners and rejoiced in the 22-year-old’s rise from small-town church choir member to national phenom.

“At 4 years old, we knew that he had something special,” one fan said during a broadcast of the watch party on WAVE 3 television. “He is a prodigy.” As she spoke, banners bobbed excitedly around her: “Win or lose, Jordan Smith is my winner,” a fan proclaimed. “Vote for Jordan” another encouraged. Billboards and tee shirts with similar sentiments can be seen throughout Harlan where Jordan often sings the national anthem at local events.

“We are beside ourselves,” says Clara Atkins Pope, who owns The Studio of Piano Fine Arts in Harlan where a then-shy Jordan first took piano lessons and participated in recitals.

“Jordan loved music and his parents loved music,” Pope recalls. “All I want to do now is watch the re-runs of The Voice on television. It just brings me so much joy.”

“Obviously, going into this, we knew Jordan was amazing,” Denny says. “I don’t think any of us were prepared for everything to blow up as quickly as it did. We believed in him and, of course, we think he’s the best… But it was really cool to see the public respond to Jordan the way they did and to see exactly what we had always seen in Jordan.”

Smith, a college junior, took a semester off from school to compete on The Voice, and was a contender from his first song. Smith’s rendition of Sia’s Chandelier in the blind auditions created a stir. During the auditions, the judges can only hear the contestants so they are judged solely on the quality of their voice. The four judges then bid for the singers of their choice to be on their team by dramatically swirling their chair around to see the person behind the voice. All four chairs turned for Jordan, and he chose to be on the team of Maroon 5 frontman Adam Levine.

From the first appearance on the show, it was clear that this Kentucky choir boy gives all the credit to God for his gift of singing and touching people with such an angelic voice. When Smith sings, you feel energized and that there’s hope for the world, which was especially poignant as the season progressed during the Paris terrorist attacks.

“I think you’re the most important person that’s ever been on this show,” Levine told the young singer.

During the live portion of the show, the contestants are required to sing a variety of genres. Each week, Smith ousted competitors, several of whom already had professional singing careers.

Smith’s songs also topped the iTunes charts for five weeks in a row, a feat no other competitor has ever accomplished. Speaking to his range, Smith had widely diverse number-one songs on iTunes: the Queen classic, Somebody to Love, and the gentler contemporary Christian hit, Mary, Did You Know.

The day after the show’s finale, Harlan County Judge-Executive Dan Mosley said the city was in “absolutely the most energetic, excited mood I’ve seen in a long time.”

“Jordan’s win has given people in Harlan County something to celebrate,” Mosley says. “The reaction at the watch celebration was unreal. Harlan is the epitome of small-town America. We’re a small, tight-knit community, and we have so many people in our community who are rich in so many different types of talents. He is representative of all these people.”

Mosley is not only proud of Smith’s talent, he is proud of the person Smith is.

“Jordan is a great person with a unique, humble persona,” the judge-executive says. “I think he will be a musical icon for many years to come.”

Adds Pope: “This whole town is trembling, just trembling with excitement. He has represented Harlan County better than anyone hoped with his talent and his behavior. We are just so excited.”