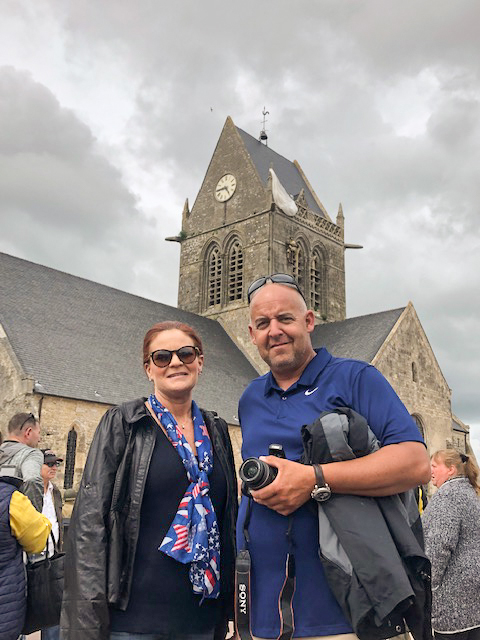 Jackson Purchase Energy Board Chair Erick Harris and his wife, Gina, of West Paducah, were invited to the 75th D-Day ceremony in Normandy, France, to be honored for Erick’s great-uncle, the famous U.S. paratrooper John Marvin Steele, who helped liberate the town of Sainte Mere Eglise during World War II’s invasion.

During the early morning country-wide air drops of Allied forces on June 6, 1944, Steele landed on the town’s church steeple. He was spotted and taken as a prisoner of war, but soon escaped. A mannequin hangs on the 12th-century church steeple as a memorial to Steele.

“The patriotism here for the American and the Allied forces is over the top,” says Erick. While there, he met Jorg May, the son of the German soldier who cut Steele down from the church steeple, shared his great-uncle’s address book and attended numerous ceremonies.

Steele is depicted in the 1962 black and white epic war movie, The Longest Day.

Read more about his trip from our June edition.