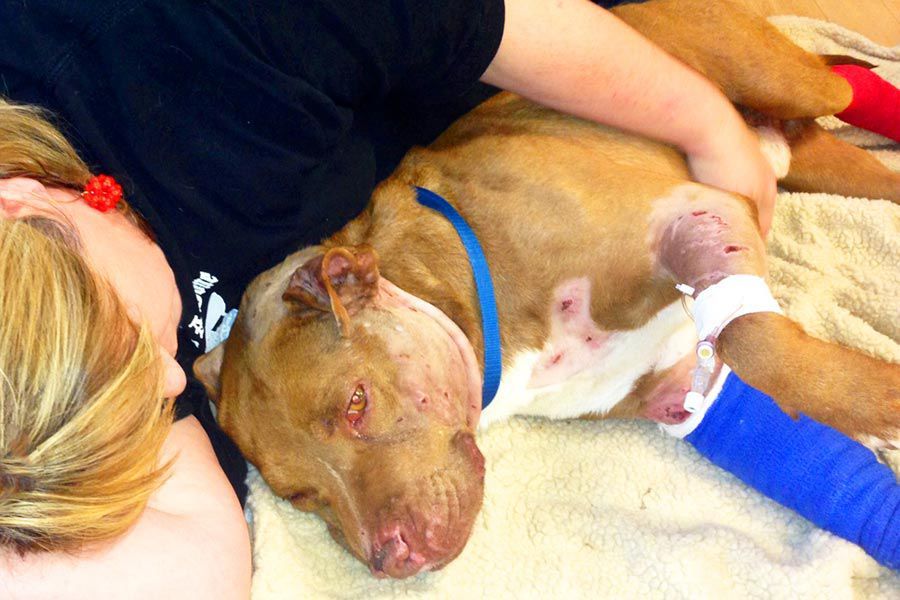 Kentuckians watched in horror as the story of football player Michael Vick’s dogfighting ring unfolded in 2007. They would have been even more horrified had they known there were no laws preventing this from happening in Kentucky.

Dogfighting has long been illegal here, but law enforcement had to catch it in the act. And dogfighting is such a secret, underground activity, it’s difficult to infiltrate.

It’s long been an embarrassment that Kentucky was the only state without strong enforceable laws to prevent dogfighting. Finally, that changed in the last legislative session, resulting in the passing of HB 428, which states: “To make any person who knowingly owns, possesses, keeps, breeds, trains, sells, or otherwise transfers a dog for the purpose of that dog or its offspring being used to fight for pleasure or profit guilty of cruelty of animals in the first degree, a Class D felony.”

Sounds simple enough. But it was a fight itself to get this law passed.

Rebecca Roberts of Shelbyville, a volunteer with the Humane Society of Oldham County who also works with the Camp K-9 prison program at the Kentucky State Reformatory, watched this legislation closely.

“I worked with Senator Paul Hornback on crafting a simple, one-paragraph bill. We reworked a bill from last year that could have hurt farmers and hunters, so we wanted to make it as simple as possible,” she says.

The proposed law they wrote had less language from last year, covering only companion animals such as cats and dogs.

“That’s when we were met with opposition,” Rebecca says. “Other advocacy groups objected to the bill, they felt it should include all four-legged animals.”

New language was added to the bill in an effort to please all groups. However, Rebecca says, “The new language provided loopholes, it weakened the law, making it more difficult to prosecute dogfighters.”

Nonetheless, the bill passed the Senate and went to the House. Advocacy groups descended on Frankfort with their objections, so the bill went back to committee. Representative and Speaker of the House Greg Stumbo kept pushing for the bill, and the language was subsequently changed again closer to its original form, was unanimously passed, and later signed by Governor Matt Bevin.

It was a confusing time for animal rescuers: Facebook posts first urged everyone to support the bill, only then to be asked to object to the new language, then urged once more to support the final bill.

But it was worth it. As Rebecca says, “For all the drama that went on, it was worth getting people educated that dogfighting actually goes on in our back yards. A lot of education and awareness was raised, that’s what is important. Now, if you’re suspected of dogfighting or there is evidence of dogfighting, you can be investigated.”

Representative Wilson Stone, who sponsored the bill, explains how important the bill is.

“We needed this bill because it’s hard to catch dogfighting in the act. This is more of an urban problem than rural, and it’s connected with drug use, drug dealing, and gambling—the dogs are just a tool for those who run a dogfighting ring. Rural dogs are more respected as pets and working dogs. We worked to make the language of this bill specific to dogfighting, it has nothing to do with traditional hunting, companion, and service animals. Dogfighting will not be tolerated here.”

Officer Lisa Nagle of the Louisville Metro Police Department reiterated the goal of this bill to radio station WFPL when she said, “If you’re hunting dogs, I’m not going to pay attention to you. It’s the dogfighters we’re focused on. There’s a huge distinction.”

The bill does not please everyone—that would be perhaps too much to ask. But most consider this bill to be at least a start. Kentucky State Director of the Humane Society of the United States Kathryn Callahan had this to say:

“The HSUS has worked in Kentucky for many years to pass penalties for possession of dogs for fighting. We wholeheartedly supported HB 428 until a floor amendment was added that severely limited the scope of the bill by removing felony penalties for all other species. The law protecting all animals from fighting contests has been in Kentucky law since 1984. Under the new law, egregious activities like hog-dog fighting and bearbaiting (where a bear is tied to a pole for dogs to attack) will no longer be considered a felony in our state. The HSUS is dedicated to protecting all animals, so we had no choice but to oppose the bill as amended. That said, we recognize this new law will offer law enforcement more tools to crack down on dogfighting and we look forward to seeing it enforced.”

Rescue groups in Kentucky hope this law will prevent cases like that of Frodo, a pit bull who in 2012 was found tied to a fence in Louisville with his muzzle duct taped shut. He was covered in bite wounds and lacerations, his muzzle was detached, and one broken leg was so badly infected it later had to be amputated. He was one of the worst cases of animal abuse seen in Louisville, and obviously had been a bait dog in a dogfighting ring.

He was rescued by The Arrow Fund, known for taking in worst-case-scenario animals, and nursed back to health over the course of many months.

Frodo has since been adopted, but continues to be a “spokes dog” for abused animals. The Arrow Fund founder Rebecca Eaves and Frodo often visited the Capitol to draw attention to the prevalence of dogfighting. When the bill finally passed, she said, “HB 428 certainly gave law enforcement additional tools in their efforts to stop the scourge of dogfighting so prevalent in our state. The Arrow Fund encourages law enforcement to aggressively investigate leads to any possible dogfighting activities and we stand ready to support them in any way we can.”

Despite his traumatic experiences, Frodo from the start was friendly, loving, and trusting. But that’s not always the case.

Another pit rescued from dogfighting is Rush. He was taken in by Saved By the Bell Bully Rescue in Louisville. Founded by Katie Short and Nick Brumback, Saved By the Bell takes in at-risk dogs from shelters and rehabilitates them. They’ve had many successes placing these dogs in loving homes.

But Rush will stay at the rescue. Brought to Saved By the Bell in 2014, he has remained reactive to other dogs and people. He likely will not become adoptable, but he loves Katie and Nick, and staying here will be best for him. As Nick says, “After almost two years, Rush has successfully accepted six people. It may seem like a small win to some, but for those who have been part of his growth, or watched it from their computer screens, we know how much of a victory it actually is.”

And Rush has a job here. Katie has a close bond with this dog, and is fond of saying, “Rush is my heart dog, he has helped me more than I will ever help him.”

HB 428 was a long time coming. But it may save many dogs from the horror and torture of dogfighting. And with any luck, it will be the beginning of even more anti-cruelty animal laws.

In the next Creature Comforts column, meet Bella, a survivor of the “Missouri 500” dogfighting raid, the largest in the country. Read her story and how she found her loving home here in Kentucky.