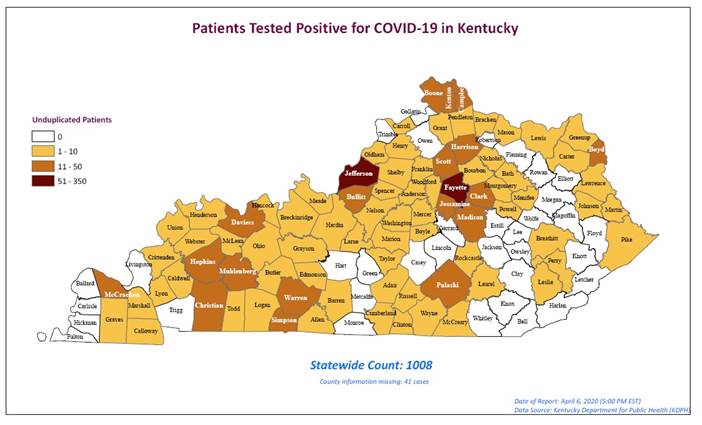 FRANKFORT, Ky. (April 6, 2020) – Gov. Andy Beshear on Monday made a call to action for any person, organization or business that can donate more personal protective equipment (PPE) for frontline workers in the fight against the novel coronavirus disease 2019 (COVID-19).

“I know we still have more PPE out there, and we need it. This is a call to action, and you all have responded, but I know there’s more,” the Governor said.

Gov. Beshear and others have said latex-free gloves, gowns and N95 and surgical masks remain in tight supply. He said his administration is making constant efforts to purchase more PPE, but has faced significant challenges.

“Almost every lead we get is like going down a rabbit hole, or it is diverted by the federal government or to a different place,” the Governor said.

A new hotline (1-833-GIVE PPE) and website (giveppe.ky.gov) have streamlined the entire donation process. In addition, PPE donations now are being accepted at all 16 Kentucky State Police posts across the commonwealth and at Transportation Cabinet offices in Louisville and Lexington.

Gov. Beshear also said he spoke Monday with members of the Kentucky Chamber of Commerce about help the business community here can provide in purchasing and manufacturing during this crisis.

The Governor also noted that earlier in the day, Vice President Mike Pence warned that Americans would experience “heartbreaking loss” this week.

“Our goal in Kentucky is, while we know there will be loss and we know it will be heartbreaking, that we control our own destiny by what we do and we minimize the loss that we are going to have here,” Gov. Beshear said.

The Governor is asking all Kentuckians to continue to fight the spread of the virus by following his10-step guidance, which includes practicing social distancing and staying healthy at home. Gov. Beshear says these efforts have the potential to save the lives of as many as 11,000 Kentuckians.

Dr. Steven Stack, commissioner for the Department for Public Health, offered a warning on testing results now that more are being conducted in the commonwealth.

“This is actually really important,” he said. “A positive test does mean you have the disease, but a negative test does not guarantee you do not have the disease. That’s because sometimes if you test too early, when someone is not showing symptoms, you may not have enough virus in your body for us to find it when we test you.”

Dr. Stack said that in such cases people would test negative for coronavirus but could remain contagious and become ill later.

Vowing to keep consumers from unfairly being overcharged for goods or services during the pandemic, Gov. Beshear again extended his executive order prohibiting price gouging by another 15 days. Anyone with information about unfair sales or billing practices is encouraged to contact the Attorney General’s Consumer Protection hotline at 888-432-9257 or fill out the complaint form online.

The Governor also talked about how important Kentuckians’ actions are right now.

“Our actions every single day make a difference. Just remember those traits from the Greatest Generation: personal responsibility, integrity, work ethic and faithful commitment. Those same traits can guide us through this coronavirus,” Gov. Beshear said. “I know this generation – us – we can be great, too. We can be great by passing this test of humanity, protecting the people around us and throughout Kentucky.”

“I know that we have faith, but we also know that we are guided by faith and wisdom and both of those are important,” said Dr. Williams. “They’re not mutually exclusive. God has given us faith, but he’s also given us consecrated common sense, so let’s join them in making sure that the flock that we guide – that we are the shepherds that not only feed them, but also we’re the kind of shepherds who protect them.”

State parks
Gov. Beshear announced the state would begin allowing first responders and front-line health care workers to quarantine in cabins at state parks in five locations across the commonwealth, which would allow them to quarantine away from their families and other loved ones if necessary.

“It’s a good use of those state parks and we’re excited to do it,” the Governor said Monday.

Case information
As of 5 p.m. April 6, Gov. Beshear said there were at least 1,008 cases in Kentucky, 54 of which were newly confirmed. There were 14 new deaths reported Monday, raising the state’s toll to 59 confirmed deaths related to the virus. The deaths announced Monday include: in Kenton County, a male who was 96 and females who were 89, 92 and two who were 91; in Jefferson County males who were 74 and 86 and females who were 56 and 85; a female, 81 and a male, 63, from Campbell; a male, 96, from Boyd; female, 74, from Fayette; and an 81-year-old male from McCracken.