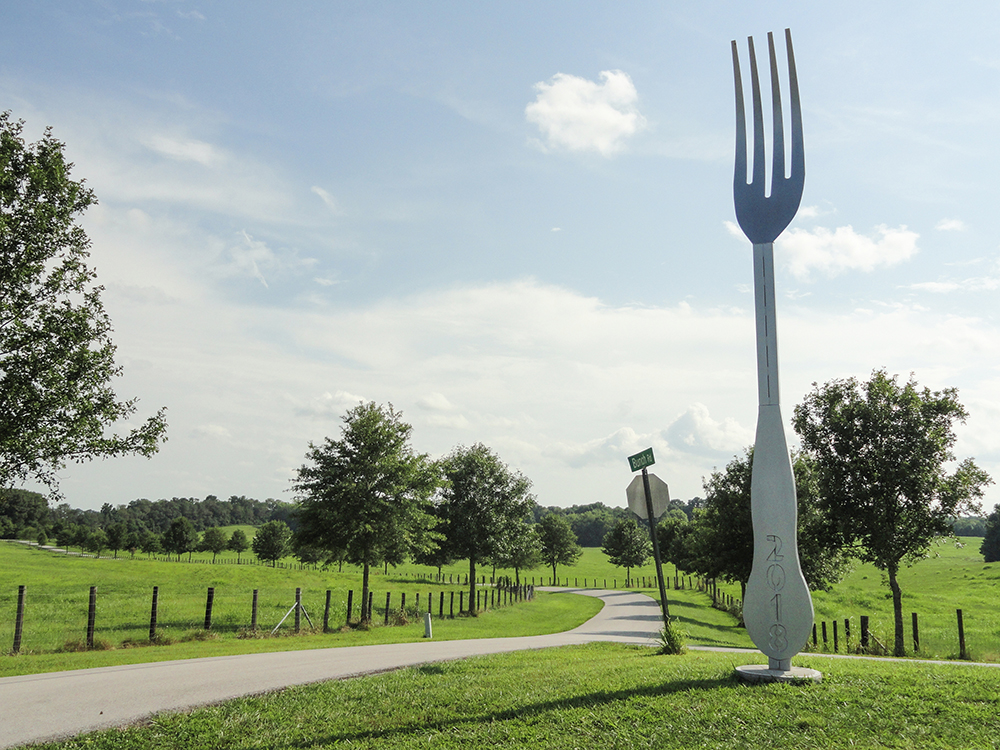 Sensational superlatives across the Bluegrass

At 510 feet long, 51 feet high and 85 feet wide, the Williamstown behemoth called Ark Encounter is the biggest boat in Kentucky; at the other end of the scale, with the smallest in population, is our smallest county: Robertson. (Smallest geographically? Either Robertson or Gallatin, depending on the source. Both measure 100 square miles roughly with less than 1 square mile at issue.) Giants on the loose in Kentucky? “Forest Giants in a Giant Forest”—three gigantic recycled wood sculptures that are the largest of their kind in the state—have overtaken Bernheim Arboretum and Research Forest.

And the world’s longest underground suspension (swinging) bridge, at Hidden River Cave, has opened up cave passageways not seen by the public since 1943.

More than a random collection of record setters, these are singularly sensational superlatives that add depth and dimension, wow and wonder to the Bluegrass State.

The Ark Encounter is three exhibits in one: the massive Ark structure itself, the incredible craftsmanship and the beautifully fabricated exhibits. Photo: Ark Encounter

Stretch out on the biggest rental houseboat in the country aboard the supersized Independence Series 1100 at the State Dock—which also offers the largest fleet of rental houseboats in the nation—at Lake Cumberland State Resort Park. Tour the longest aging warehouse of its design in the world at Castle & Key Distillery’s Warehouse B near Frankfort; it can store as many as 35,000 barrels of the good stuff.

Before he discovered bourbon in 1789, Rev. Elijah Craig opened a classical academy in 1788; we know it as Georgetown College, the oldest Baptist college west of the Allegheny Mountains. Georgetown College is home to numerous antebellum buildings and three art galleries. Photo: Georgetown/Scott County Tourism

Cynthiana has the world’s largest known Walking Dead mural and, with its secret fairy doors measuring a wee 4 inches hidden around downtown, may well have the smallest, too. And in spite of its miniature figures and furnishings numbering in the hundreds of thousands, Danville’s Great American Dollhouse Museum is our smallest U.S. cultural heritage museum.

Screw your courage to the sticking place for a leap off the tallest bungee jumping platform bridge in North America at Young’s High Bridge, looming 240 feet above the Kentucky River in Anderson County. Owned by Vertigo Bungee, the bridge is adjacent to Wild Turkey Distillery, should you need a little something to calm your nerves afterward.

Hanging upside-down on the exterior of Caufield’s Novelty in downtown Louisville is a 24-foot tall, 16-foot wide vampire bat—the largest (and creepiest) anywhere.

Cave or building? According to the Metro Louisville Government and the State of Kentucky, the Louisville Mega Cavern is a building—the largest in the state, with its own building code and, should the need arise, room for 16,000 boats or 50,000 people.  Photo: Louisville Tourism