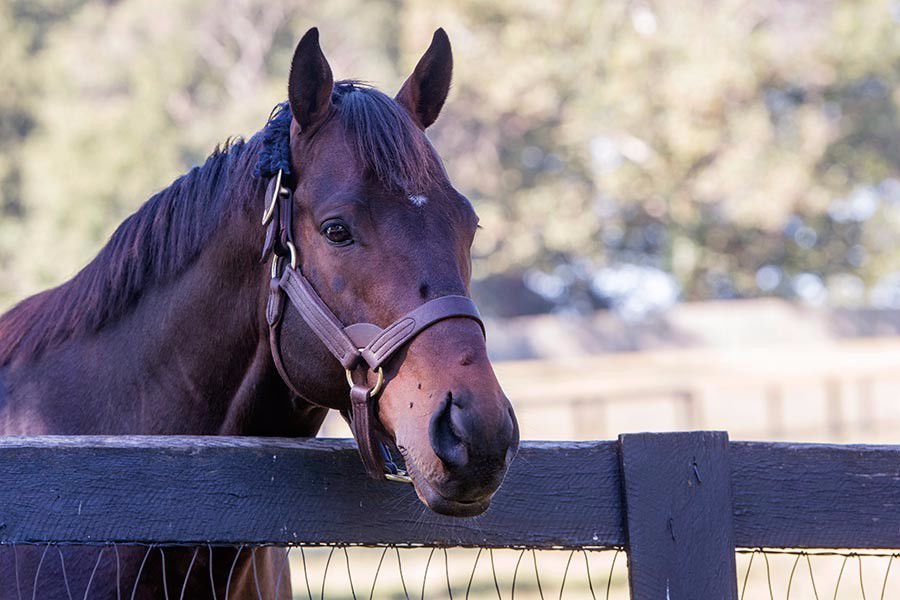 Play tourist for a day without leaving the state

Looking for a fun day trip? Why not make it right here in Kentucky? Get a taste of quintessential Kentucky via some of the state’s most famous homegrown attractions—from our iconic horse farms and world-renowned bourbon distilleries, to enticing wineries, breweries, and bluegrass music venues. These are the places that truly make Kentucky unique, and a destination for visitors around the world. Here’s just a sampling of the fun that awaits when you visit Kentucky’s signature sites.

Horses
Nothing beats the beauty of a Kentucky horse farm, with rolling pastures, freshly painted fences, and majestic Thoroughbreds. Many of Kentucky’s most iconic farms offer tours, allowing guests to get an up-close look at the horses that have helped shape racing history.

At Claiborne Farm in Paris, which has raised more than 75 racing champions and 10 horses voted Horse of the Year honors for 18 seasons, tour visitors can stroll through the farm’s picturesque stables and get a view of its current stallions, including War Front—dubbed by groom Kevin Lay the “Sire on Fire” based on the success of his progeny. The tour also stops by the venerated Claiborne breeding shed, where six of the sport’s 12 American Triple Crown winners were sired, and which is still used today.

“This is sacred ground right here in the Thoroughbred industry,” Lay says, as he opens the black door of the breeding shed, which dates to the early 1920s. “They claim when Nasrullah, Secretariat’s grandsire, stood here (in the 1950s), he tried to stand and touch the ceiling, so they raised the ceiling about 3 feet,” says Lay, 40, a stallion groom who has worked at Claiborne since he was 17.

At Claiborne, visitors can also see the resting place of the great Secretariat, as well as other racing legends, including fellow Triple Crown winners Gallant Fox and Nijinsky, who won the English Triple Crown in 1970. “Even after all this time, Secretariat still brings people here from all over the world,” Lay says. “He was something special.”

In addition to Claiborne, many of Kentucky’s most famous Thoroughbred farms offer tours of their grounds; check their Web sites for availability and registration information. (While some tours are free, a per-person gratuity to the guide is expected.)

Or, even easier, book online. Horse Country Inc., launched last year, is a nonprofit aimed at providing high-quality visits to Kentucky’s pre-eminent Thoroughbred farms, equine clinics, and industry suppliers. It offers a one-stop Web site, www.visithorsecountry.com, where guests can select and book a tour at an array of Kentucky horse farms, including Coolmore America’s Ashford Stud (home of American Pharoah, Triple Crown winner in 2015), Claiborne, Lane’s End, Three Chimneys, Taylor Made, WinStar Farm, and many more. Tours booked through Horse Country cost $20 for adults and $11 for children and are inclusive of the gratuity.

Positioned near Louisville, Oldham County is home to several horse farms as well, such as Windy Meadows Horse Farm on Bluegrass Parkway in La Grange and Aurora Acres Gypsy Vanner Horse Farm, a private horse farm in Crestwood where tours are $8 per person.

Of course, during racing season, don’t forget to include a trip to Keeneland or Churchill Downs on your horse tour itinerary, so you can experience the thrill of seeing Thoroughbreds do what they do best: run.

At Four Roses Distillery in Lawrenceburg, which has been named Whiskey Magazine’s American Distiller of the Year four out of the last five years, the sweet, yeasty smell of fermenting mash—future bourbon—washes over you the moment you step out of your car.

The Four Roses tour takes visitors inside its distillery building, which is listed on the National Register of Historic Places due in part to its picturesque—and unexpected—1910 Spanish Mission-style architecture. There, giant grain cookers, fermenters, and column stills work their magic, eventually culminating in 10,000 gallons of distilled spirits a day, which are shipped to the Four Roses warehouse and bottling facility in Cox’s Creek. There the product is aged before eventually becoming part of one of Four Roses’ 10 distinctive bourbon recipes, an uncommonly varied mix that helps set it apart from other Kentucky distilleries.

“We have some people, as soon as we get a certain single-barrel variety in, they’re here to get it. Those are always selected by the master distiller,” says Mark Combs, a sales and marketing assistant at Four Roses.

Tours are available at most of Kentucky’s bourbon distilleries, with times and pricing information available on their Web sites. Here are just a few to consider:

Maker’s Mark, Loretto For an even more intimate look at the distillery that made red wax famous, opt for the Beyond the Mark specialty tour. The two-hour tour is limited to 12 people and includes stops not seen on the regular daily tour. Cost is $35/person and includes a set of wax-dipped glasses. Book online at www.makersmark.com/distillery/tours.

While there, enjoy Maker’s Mark’s new visitor’s center and an original glass art installation by celebrated artist Dale Chihuly on display at the end of the tour.

Willett, Bardstown It costs just $7 (or $12 if you’d like a souvenir glass) to take an intimate, guided tour of this independent, family-owned and operated microdistillery, which produces the popular Willett Pot Still Reserve bourbon as well as boutique, small-batch bourbons like Rowan’s Creek, Johnny Drum, and Noah’s Mill. The tour includes a complimentary tasting.

Buffalo Trace, Frankfort The picturesque distillery overlooking the Kentucky River is a National Historic Landmark and offers five tours to choose from, including the Trace Tour, which offers a history of the brand and a tour of the distillery; the Hard Hat Tour, an insiders’ look at the bourbon-making process; and even a Ghost Tour, since the distillery is rumored to be haunted.

Wineries
While Kentucky may be most famous for its bourbon, the state is also home to a growing number of successful wineries. The online map and wineries listing at www.kentuckywine.com includes more than 60 locations and is a great place to begin charting your Kentucky wine tour itinerary. Here are a few spots not to miss:

Elk Creek Vineyards, Owenton As Kentucky’s largest winery, Elk Creek produces more than 20 varieties of red, white, and fruit wines, and bottles nearly 30,000 gallons of wine each year. Twice-daily free tours are available every day. Special fee-based package tours and tastings—including Wine 101, offered on the first Sunday of each month—are also available. The grounds include lodging rooms as well as a café, with live music every Friday and Saturday evening.

Up the Creek Winery, Burkesville As a small farm winery, Up the Creek handcrafts each of its wines. Winner of the Best Boutique (Small Production) Wine award in last year’s Kentucky Commissioner’s Cup for its Gold Rush variety, Up the Creek is open for tastings from 10 a.m. to 6 p.m. Friday and Saturday.

Reid’s Livery Winery, Alvaton Producing 50-60 cases of each of its 12 wines a year, Reid’s Livery Winery has taken home numerous international wine awards, including Best of Class at the prestigious Indianapolis International Wine Competition for its Diamond’s and Lace and Norton varieties in 2015 and 2012, and the Kentucky Commissioner’s Cup for its Black Raspberry 2013. Since opening in 2009, its wines have been awarded more than 100 medals. Tours and tastings of its 12 wines are offered daily at the combination small winery and working horse farm.

Purple Toad Winery, Paducah If gold-medal winning fruit wines are a favorite, you’ll want to make plans to stop in at Purple Toad, where apple, strawberry, blackberry, peach, and blueberry wines are specialties, along with classic reds and whites. Winner of numerous awards, the vineyard’s Lauren’s Blackberry wine took home the Best Fruit Wine title in 2014 at the Indianapolis International Wine Competition, while its Black Peach wine has twice been named Fruit Wine of the Year at the Wines of the South competition.

Breweries
Check out the Kentucky Guild of Brewers’ online listing of Kentucky Breweries (www.kygbrewers.org/kentucky-breweries) and you’ll see why Lexington and Louisville are the current hot spots in the state’s microbrewery boom. The cities are home to more than a dozen breweries that are churning out handcrafted beers–including Lexington’s Country Boy Brewing, West Sixth Brewing, and Alltech Kentucky Ale; and Louisville’s Against the Grain Brewery and Smokehouse, Bluegrass Brewing Company, and Great Flood Brewing Company. While you’ll want to give each of these their due taste, don’t dismiss the breweries that are popping up in other areas of the state, including:

Beer Engine, Danville Since launching their brewery in 2011, the owners expanded from their intimate, 25-seat bar in Danville last November to add a new, well-received second location in Louisville under the brand Monnik Beer Co.

White Squirrel Brewery, Bowling Green This family-friendly restaurant and taproom offers, among other varieties of beers and ales, the classic White Squirrel Kolsch.

Bluegrass and country music
Not many states can boast that they’re the birthplace of a musical style, but Kentucky can. Whether you’re a die-hard fan of the bluegrass genre or simply want to experience a key part of Kentucky’s cultural heritage, a trip to Rosine to visit the home of Bill Monroe, the father of bluegrass music, should be on every Kentuckian’s bucket list. It’s open Monday through Saturday, 9 a.m.–4 p.m., Sundays 1–4 p.m., and no appointment is necessary. Tours are guided and admission is free, but donations are requested. You can time your visit to take in the free Rosine Barn Jamboree at 5:30 p.m. every Friday. Just 2 miles from the Monroe homeplace, it’s been listed one of 52 Places to Go in 2016 by the New York Times.

Other Kentucky country and bluegrass must-sees include:

International Bluegrass Music Museum, Owensboro Follow the timeline of bluegrass music, from its roots in Scots-Irish string bands to camp meetings, through the jazz era and folk music revival. Exhibits showcase artifacts like folk singer Pete Seeger’s banjo, items from Bill Monroe’s estate, and the fiddle made famous by Monroe’s Uncle Pen. The museum is also home to the International Bluegrass Music Association’s Hall of Fame.

Kentucky is in the middle of a bourbon resurgence, and there are so many wonderful distilleries across the state, there’s no way to list them all here.

“There are currently 33 operating distilleries in Kentucky, with more than a dozen either announced or under construction,” says Eric Gregory, president of the Kentucky Distillers’ Association. For more information on KDA, visit www.kybourbon.com.

KDA formed the Kentucky Bourbon Trail in 1999 to give visitors a behind-the-scenes look at crafting bourbon. According to kybourbon
trail.com, the bourbon industry helps create 9,000 jobs and generates more than $125 million in tax revenue each year.

In the last five years, 2.5 million visitors from all 50 states and 25 other countries have visited the Kentucky Bourbon Trail.

• Need to plan a family trip right here in Kentucky? Check out these fun zones for kids.
• Want to soak up more of what Kentucky has to offer? Check out this year’s Best in Kentucky winners.
• Ready to #TravelKy? Start your planning process with this travel guide.