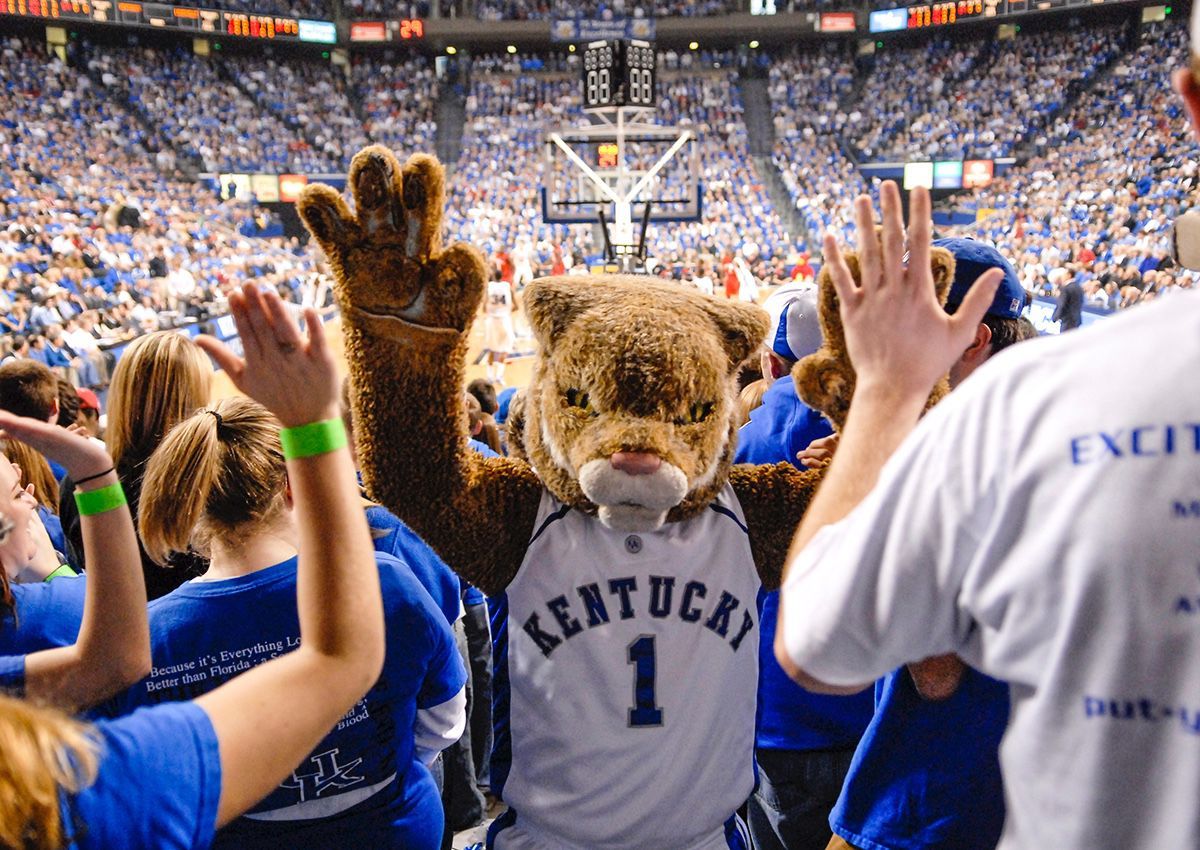 The University of Kentucky’s Wildcat makes his way through the eRUPPtion Zone in Rupp Arena. Photo: Tim Webb

The agreement is between Central Bank and JMI Sports, and UK / LCC’s multimedia rights partner.  This agreement bolsters Central Bank’s existing relationship with JMI Sports and UK to an annual average investment of $4.1 million with a term of 14 years, expiring in 2033.  Upon completion of the renovation, the portion of this investment associated with naming rights will be $1.5 million. The opportunity to sell naming rights with other media rights is part of LCC’s and the university’s Right of Use Agreement executed in February 2018 and transferred media rights ownership to UK.

“This is a milestone agreement which represents the first naming rights agreement in the 44-year history of this legendary facility,” said Bob Elliston, Lexington Center Corporation Board Chairman. “We are thrilled to align with such a strong community leader, Central Bank.  Central Bank has had a longstanding, 30-plus year relationship with Lexington Center. We are confident they will protect and advance the tradition of these fine facilities and we are excited to begin this new decade of our service to the community and the region as Central Bank Center!”

A key part of the agreement is the naming rights to the Lexington Convention Center complex, which is currently undergoing a major expansion.  To preserve and honor the history and tradition of the legendary basketball program led by Adolph Rupp, the arena will be known as Rupp Arena at Central Bank Center.  The Central Bank Center brand will be on interior, exterior and directional signage, as well as collateral materials related to the Convention Center and Rupp Arena. New graphics are being designed which will be fully integrated into the expansion project and other areas of the facility.

For UK Athletics, this marks another instance of innovative partnership with a company that shares its commitment to the success of its 500-plus student-athletes and the people of the Commonwealth.

“The power of partnership enables us to pursue our goal of building an elite athletics department and empowering young people to grow as students, athletes and people,” Athletics Director Mitch Barnhart said. “Central Bank, the Lexington Center and JMI Sports have all been strong and committed partners of our university for a long time and we are proud to announce this next phase of our partnership.

“It was also essential to us that we preserve the name of this incredible venue out of respect for Coach Rupp, his accomplishments and his family.  We want to preserve and enhance the unmatched tradition of the building that bears his name. We look forward to playing at Rupp Arena at Central Bank Center for years to come.”