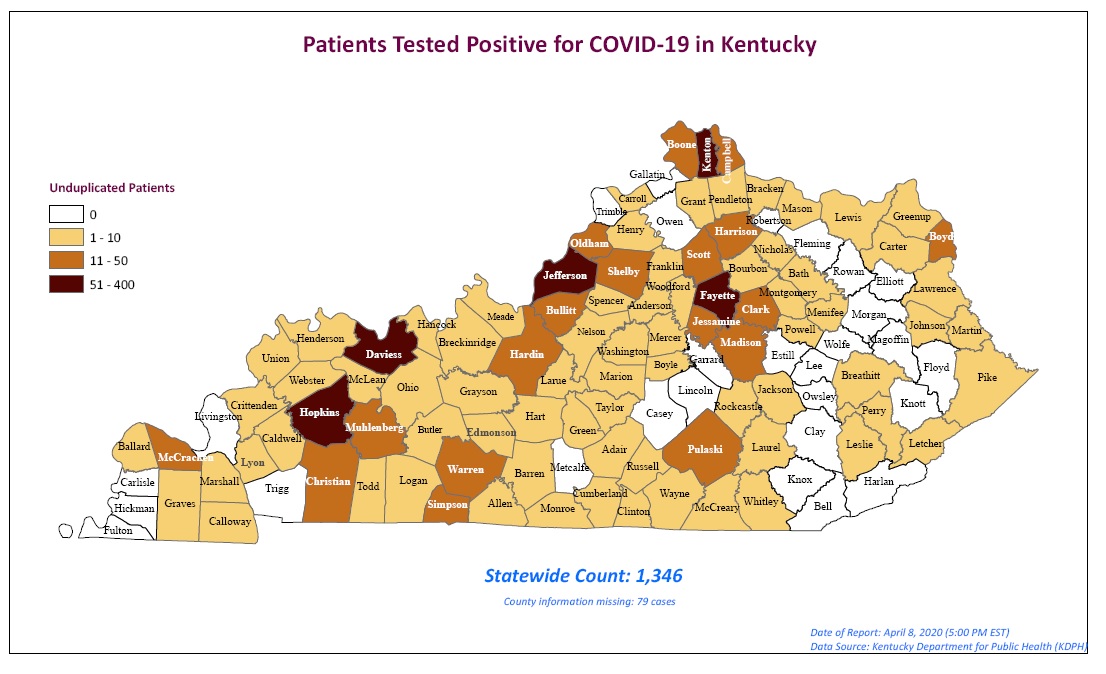 FRANKFORT, Ky. (April 8, 2020) – Gov. Andy Beshear on Wednesday urged Kentuckians to be resilient in the face of hardship and sacrifice made as cases of the novel coronavirus disease 2019 (COVID-19) in the commonwealth continue to grow.

“Remember even with those sacrifices, there are going to be escalating cases before we have fewer cases. In other words, we still know that across the country and here in Kentucky that it is going to get tougher before it gets better,” the Governor said. “But we are not talking about an indefinite period of time. We know that there is an end. We just have to be strong enough to get there.”

A new order limits one adult per household in the store at a time at those businesses still open,

La Tasha Buckner, the Governor’s general counsel and chief of staff, said the new rule is aimed at cutting down crowds and opportunities for essential shopping runs to turn into a social hour.

Prescription drugs
On Wednesday, Gov. Beshear extended a previous executive order that will allow pharmacists and pharmacies to better treat Kentuckians amid the coronavirus outbreak in the commonwealth.

Under the order, pharmacists will be able to dispense emergency refills for up to another 30-day supply of non-scheduled medications to Kentucky residents. It also gives pharmacists wide discretion in dispensing medications to fight COVID-19, requiring only that they follow guidelines and advice of the U.S. Centers of Disease Control and Prevention, the National Institutes of Health or the state commissioner of public health.

Pharmacists also will be allowed to work out of temporary or non-traditional areas that otherwise would be restricted. The order runs through May 8 but can be extended.

“The local community was very grateful and described them as angels coming to help,” said Dr. Stack. “So I cannot begin to express my gratitude enough on behalf of myself and the Governor for their volunteerism and being willing to help others in their time of need.”

“When Kentuckians were asked to answer the call, look at how we’ve done it in so many ways including our medical students volunteering – volunteering to put themselves in harm’s way – because this is what they signed up for, wanting to make sure they were helping their fellow human beings,” said Gov. Beshear.

“While I know it will be hard to worship virtually or in other ways, it will save lives and it will mean the people you would normally see in person at church will still be in church months from now,” said Gov. Beshear. “It protects your congregations, it protects people around you, it’s our test of humanity and maybe it’s even a test of faith to be able to do things differently. But knowing that our faith is strong, that we are up for this and that we are protecting our fellow human beings.”

While mass gatherings are banned and many travel restrictions are in place, the Governor told Kentuckians not to worry as the Easter Bunny has been deemed an “essential worker” and would be able to travel and work this weekend.

Unemployment payments grow $600
Late Wednesday afternoon, the Governor announced Kentucky received the federal funding stream to begin making the additional $600 per week payment to those Kentuckians receiving unemployment insurance benefits as soon as Thursday night. This will be made in a separate payment from other unemployment benefits. Kentuckians do not need to do anything to receive this payment.

On fatalities attributed to the coronavirus, with about 82% of the known cases accounted for, Kentucky deaths included about 85.96% Caucasian, 12.28% African-American and 1.75% Asian.

Long-term facilities
Gov. Beshear provided an update on facilities that he has highlighted as being particularly vulnerable to coronavirus spreading and creating clusters of cases. To date, 72 residents and 35 staff members have tested positive for COVID-19. There have been 13 resident deaths. The cases have affected 25 facilities, though the Governor said in several cases the virus may not have entered the facility.

“While we say 25 facilities, at least 10 of them haven’t had residents test positive and have only had staff members. And many of those staff members were not necessarily in the facility or even around the facility during that period of time,” said Gov. Beshear.

On Wednesday, the Green River Correctional Complex reported one additional case of COVID-19 among a staff member but no new infections among the inmates.

At Western State Hospital, three more staffers were reported Wednesday to have coronavirus, but no new cases were reported among residents. Sadly, there were two deaths reported of residents who previously were diagnosed with the disease.

Case information
As of 5 p.m. April 8, Gov. Beshear said there were at least 1,346 coronavirus cases in Kentucky, 204 of which were newly confirmed.