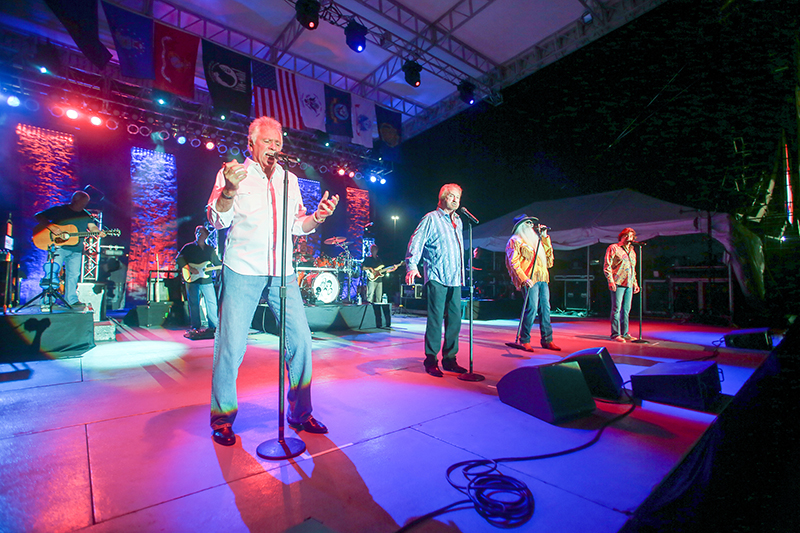 11 nights and 26 bands: from retro pop to hip hop, gospel to rock, and country to soul.

“We are proud to be the presenting sponsor for the Kentucky State Fair Concert Series. Music and the State Fair go together like fresh rolls and honey cinnamon butter,” said Kent Taylor founder and CEO of Texas Roadhouse.

“Moving the concerts from Freedom Hall and Cardinal Stadium to a new entertainment area provides fairgoers a value-added experience,” said Dr. Mark Lynn, chairman of the Kentucky State Fair Board.  “And with Texas Roadhouse on board as a major entertainment sponsor enhances the experience for our 600,000 guests all eleven days of the fair.”

Gary Allan’s gritty vocals and not-quite-mainstream sound appeals to fans of classic country. Allan has released nine studio albums and a greatest hits album. Of his songs, 26 have made the Billboard’s Hot Country Songs chart and five have reached the No. 1 spot, including “Every Storm (Runs Out of Rain)” and “Nothing on But the Radio.” www.garyallan.com

Hailing from Atlanta, Georgia, R&B group 112 is best known for the hit song “Peaches & Cream.” Additionally, 112 won a Grammy award for “I’ll Be Missing You” with Sean Combs and Faith Evans. The group re-united in 2010 and in October 2017 released “Q, Mike, Slim, Daron,” their first album in 12 years.

Joining them is special guest Midnight Star who formed at Kentucky State University in 1976 as a self-contained party band and quickly earned reputation for their live performances. Their 1983 album “No Parking on the Dance Floor” was certified double-platinum. Midnight Star charted three albums on the U.S. R&B Top 10 with 7 songs also reaching the top 10. www.midnightstarband.com

Grammy nominated, multiplatinum artist Great White hit mainstream in 1987 when they released “Once Bitten,” which featured the hits “Rock Me” and “Save Your Love”. The album was certified platinum in April 1988. As of August 2007, Great White has sold more than 10 million records worldwide. www.officialgreatwhite.com

Vixen’s first hit single, “Edge of a Broken Heart” blasted onto the Billboard charts fueled by heavy video rotation on MTV. Their self-titled freshmen LP garnered two more hits with “Cryin’” and “Love made Me” both charting on Billboard’s Hot 100. The group’s live performances established Vixen as a premiere rock act to be taken seriously. vixenofficial.com

Each member of Goldy lockS brings their own style to the group, for a fusion of rock, pop, jazz, R&B and heavy metal. They’ve shared the stage with a wide range of artists, including Nickelback, Ted Nugent, Collective Soul, Stevie Nicks, Pat Benatar, Maroon 5 and Grand Funk Railroad.www.goldylocks.net

Sunday, Aug. 19, 8 p.m.
A country and gospel quartet, The Oak Ridge Boys have been entertaining Kentucky State Fair audiences for 43 years. The group has scored 12 gold, three platinum and one double platinum album; earned Grammy, Country Music Association and Academy of Country Music Awards; and were recently inducted into the Country Music Hall of Fame. www.oakridgeboys.com

Larry Gatlin & the Gatlin Brothers have dazzled audiences for more than 60 years. They have won countless awards and their music has taken them to numerous concert halls, festival stages, national TV shows and even the White House on several occasions. The Grammy award winning song “Broken Lady” was a chart-topping success and the hits continued, including their signature song, “All the Gold in California.” www.gatlinbrothers.com

American Christian pop band Bonray is made up of siblings Zac, Jesse, Jake and Morgan Bonner. The band released their debut EP “Turn My Eyes” in 2017. The title track was featured on the Billboard’s Christian Airplay charts, peaking at No. 26. bonraymusic.com

Tuesday, Aug. 21, 8 p.m.
Hit after hit from the ’60s and ’70s, the Happy Together Tour unites some of the era’s top artists: The Association; Ron Dante of the Archies; The Turtles; The Association; Chuck Negron, formerly of Three Dog Night; The Cowsills and more.

It’s only halfway through 2018 and country star Chris Janson has already had a year of milestones. Known for his high-energy performances, Janson recently closed the 53rd Annual ACM Awards and has previously taken the stage at “The Tonight Show Starring Jimmy Fallon,” “TODAY” and more. His crowd-capturing presence led to his official induction into the Grand Ole Opry via Garth Brooks in March, when he became the youngest living member of the hallowed organization. The singer/ songwriter earned the spotlight with his chart-topping singles “Fix a Drink” and platinum-certified smash “Buy Me a Boat.” Janson’s current single “Drunk Girl” from his sophomore album “Everybody” is currently Top 30 on country radio and drawing praise from fans and critics alike. www.chrisjanson.com

Kentucky native Carly Pearce has always wanted a career in country music. At the age of 11 she began touring and at 16 quit high school for a job performing at Dollywood. Now, with her highly-acclaimed debut album “Every Little Thing” and the gold-certified No. 1 title track, Pearce is the highest charting solo female debut since July 2015 and joins an elite group of only three women to accomplish this feat in the past 12 years.www.carlypearce.com

Before coming together in Nashville, The Cunning’s four members kick started their careers across the globe, cutting their teeth in locations like New Zealand (where front man Sean Cunningham charted one of the country’s biggest hits with ATLAS) and the UK (where drummer Steve Forrest performed with platinum-selling band Placebo). Their raw rock sound combines guitar-field stomp and anthemic pop melodies in their newest EP “Run Through the Desert.” www.cunningmusic.com

Multi-platinum Nashville recording artist Josh Turner, is one of country music’s most recognizable hit-makers. With a rich, deep voice and distinctive style, Turner is a disciple of traditional country music and one of the youngest members of the esteemed Grand Ole Opry. From his 2003 platinum-selling debut “Long Black Train” to his most recent Billboard No. 1 release “Deep South”, Turner has garnered multiple Grammy, Country Music Association and Academy of Country Music nominations. joshturner.com

For Dillon Carmichael, music was a major part of his life growing up. Both of his parents were musicians and his uncles, country superstars John Michael and Eddie Montgomery, made a name for themselves performing around Kentucky. In 2012 Dillon, who cites Vern Gosdin, Waylon Jennings and Merle Haggard as influences, moved to Nashville to follow his dream. “Made to Be a Country Boy” is the first single from Carmichael.dilloncarmichael.com

For three decades, the Commodores have remained a force in the music industry. Known for their song “Brick House” they have churned out hits since the Motown days, selling more than 60 million records. With hits like “Nighshift” and “Sail On,” the Commodores are proven artists. The band reached the top of the Billboard charts twice with their hit singles “Three Times a Lady” and “Still”. They also topped the US R&B singles chart on seven occasions. www.commodoreslive.com

With more than 9 million in sales and 27 No. 1 songs across multiple Christian radio formats, MercyMe remains at the top of the Christian music scene. Their landmark song, “I Can Only Imagine,” was the first digital single in Christian music history to be certified platinum and double-platinum. Billboard named them the Christian Artist of the Decade in 2009. In addition, they have multiple Grammy nominations, Dove Awards and American Music Awards to their credit. mercyme.org

After forming in late 2007, Stars Go Dim finished recording and released their first self-titled EP in October 2008, which consists of five tracks: “Come Around”, “Crazy”, “Walk On”, “Incredible”, and, “Get over It” In 2016, Stars Go Dim were nominated for a Dove Award for New Artist of the Year. starsgodim.com

The 2018 Kentucky State Fair is Aug. 16-26 at the Kentucky Exposition Center. For more information,