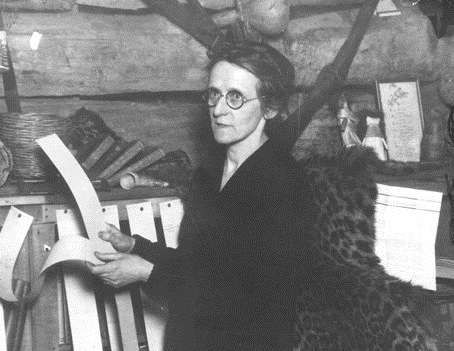 A frail, 40-year-old woman traveling to an isolated part of the country and establishing a community that has lasted for a century seems like a piece of fiction. However, it is not an imaginary tale but an amazing journey that has resulted in life-changing opportunities for thousands of people who call the Appalachian Mountains home. In the early 1900s, Alice Geddes Lloyd was stricken with spinal meningitis and polio, which greatly weakened her body. At the recommendation of her doctor, who had given her six months to live, she and her mother made the long, arduous trek from Boston to the hills of eastern Kentucky in hopes that the fresh mountain air would strengthen her weakened immune system. What she found upon her arrival in Kentucky was something more important than her physical well-being; she found a poor, yet proud, group of people who needed her. She found her purpose in life.

At the behest of a local resident, Abisha Johnson, who offered her land to build a structure in exchange for educating his children, Mrs. Lloyd and her mother moved to Caney Creek and established the Caney Creek Community Center Inc. in 1917. Emboldened by the mountaineers’ eagerness to better themselves and connect with the world around them, Mrs. Lloyd immediately reached out to these people that the rest of America had forgotten. She knew that such a project would need significant funding; so, with an Oliver #9 typewriter and great determination, Mrs. Lloyd began writing thoughtful and persuasive letters to the people she knew in New England asking for money, books, supplies, and teachers. The thousands of letters that Mrs. Lloyd wrote allowed the Caney Creek Community Center to grow substantially in the following years.

The Center, as it was fondly called by local residents, enhanced the area in numerous ways. Mrs. Lloyd’s first efforts were to support better health and hygiene practices, along with improving the water supply and sanitation methods. She accomplished her first goal by constructing “Dream Houses,” which were small two- or three-room houses resembling Mrs. Lloyd’s own home that is still located on the property. After construction, Mrs. Lloyd then began to encourage the families to consider moving into the new well-built Dream Houses. Although many were hesitant, the prospects of work, prime hygiene care, and education for their children were the most appealing factors. Dream Houses began sprouting up all along Caney Creek despite the two requirements of a $10 monthly payment in either cash, produce, or labor, and a signed contract saying they would be supportive of the policies of the Center.

Mrs. Lloyd’s efforts, in conjunction with the mountaineers’ self-sufficient spirit, were instrumental in instituting the various programs of the Center, many of which are still operating today. The Caney Exchange provided everyday household necessities such as nails, windows, clothes, and other goods in exchange for labor, produce, or cash. Today, the Caney Exchange has been transformed into a clothing exchange that offers a wide range of donated clothes to local residents. Money was never readily available and nothing was given freely or as handouts except when Christmas came around. The Christmas Pretties program was started by Mrs. Lloyd’s mother, Ella Geddes, soon after the Center was established. Mrs. Lloyd would annually write letters to donors asking for “just any little ‘pretty’” that would bring joy to a child on Christmas. Over the years, countless gifts were donated and distributed to children throughout the area, quickly making Christmas the favorite time for those living on Caney. Today the tradition of the Christmas Pretties still continues along Caney Creek with presents given to several thousand children each year.

The Center also brought education for the first time to the hidden hills of eastern Kentucky with the assistance of June Buchanan, who volunteered her services to the Center after receiving one of Mrs. Lloyd’s letters. More than 100 schools were established throughout the mountains, beginning with an elementary and high school on Caney Creek that eventually developed into a college. In 1923, Mrs. Lloyd founded Caney Junior College, which was renamed in her honor following her death in 1962. Alice Lloyd College made its transition to senior college status in 1982. Through the many educational establishments, Mrs. Lloyd did more than teach the mountain folk how to read and write; above all, she sought to build character and produce leaders by teaching the Purpose Road Philosophy. The philosophy instilled purpose, goal setting, and character, tools that would enable the students to go out to other mountain communities and ultimately be the leaders that the area needed.

Despite tremendous challenges, including various health concerns, Mrs. Lloyd’s efforts, along with the support of faculty, staff, students, and community residents, resulted in one of the most unique institutions in America. Because of Alice Lloyd’s faithfulness and God’s providential care, the Caney Creek Community Center is celebrating its 100th year in 2017. A special ceremony will occur on October 14 during the Alice Lloyd College’s Appalachia Day Homecoming.  Please join us in celebrating this centennial.