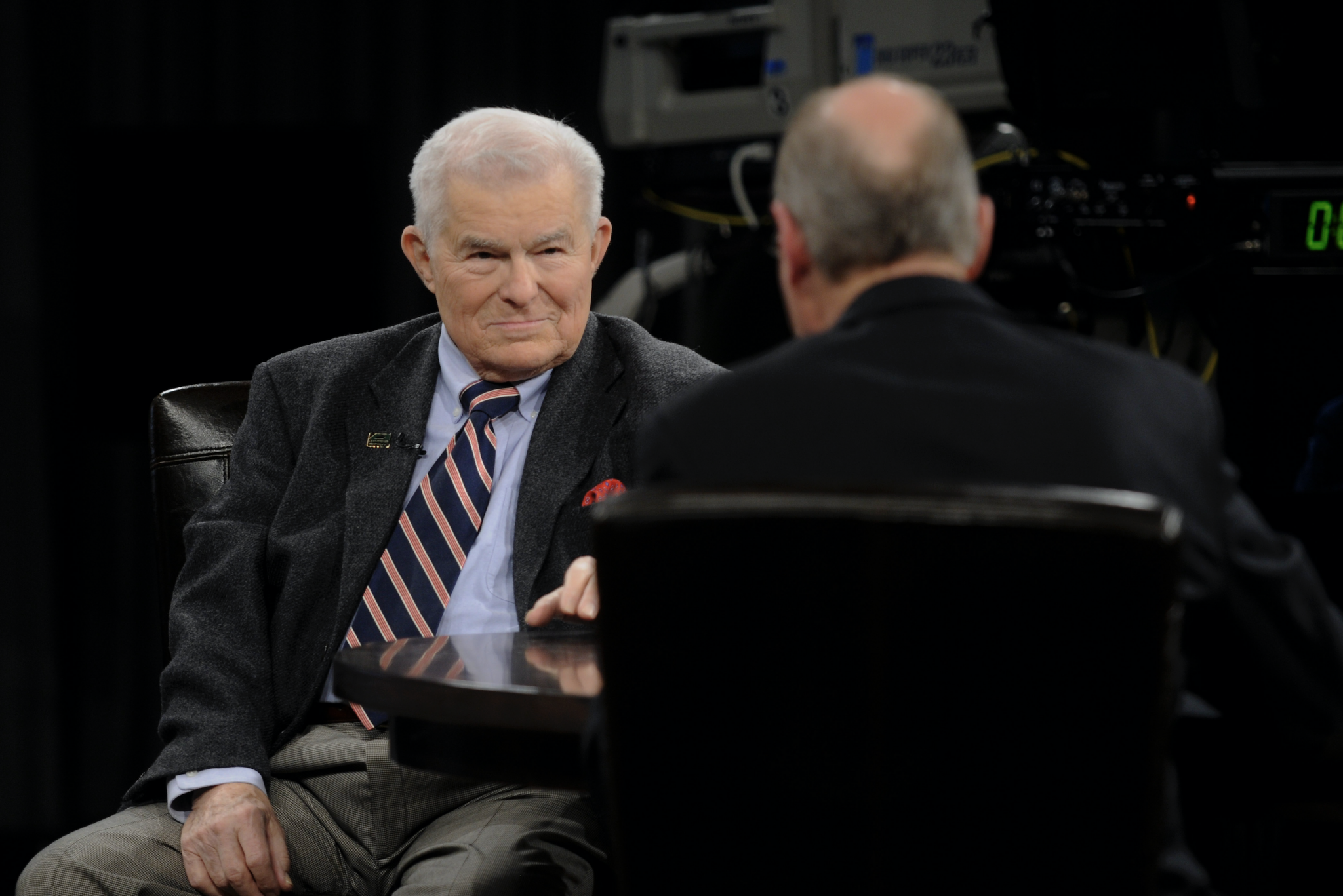 “The Comment show was a wonderful third life for me. I was able to be a journalist on a larger stage. KET turned on the lights and the cameras, and we were talking to the whole state of Kentucky.” Al Smith, Visions, 2007

Al Smith, who brought KET’s public affairs programming to households across the commonwealth for 33 years as the host of the popular program Comment on Kentucky and served as a tireless advocate for journalism and education during his lengthy and successful career, has died at the age of 94.

Here is a tribute written to Mr. Smith posted on KentuckyLiving.com in 2013.

If the only thing Al Smith ever did for his adopted state was to serve as the longtime host of KET’s public affairs program Comment on Kentucky, he would have secured his place as a charter member of the University of Kentucky Journalism Hall of Fame. For more than 30 years, he analyzed the state’s news and trends with a weekly panel of journalists and other knowledgeable people.

It is hard to say who benefited most. Under Smith’s stewardship, Comment became one of KET’s most popular programs. For Smith, whose day job was publishing a chain of weekly newspapers, the broadcast gave him statewide exposure, which led to him serving as the founding chair of the Kentucky Oral History Commission; chair of the Kentucky Arts Commission, Leadership Kentucky, and the Shakertown Roundtable; co-chair of the Appalachian Regional Commission under Presidents Carter and Reagan; founding board member of the Prichard Committee for Academic Excellence; and co-founder of the Institute for Rural Journalism and Community Issues at the University of Kentucky.

Not bad for a guy who was born in Florida, grew up in Tennessee, and worked on newspapers in New Orleans until his career was almost ended by a serious drinking problem. His memoir, Wordsmith: My Life in Journalism, published in 2011, is divided into two sections: “The Thirsty Years” and “Recovery.” With typical candor he recounts the rewards and challenges of editing a small-town paper, the Russellville News-Democrat, and his personal triumph over alcohol. In both accounts he acknowledges the help he received from tenacious teachers, forgiving friends, and his wife of more than 45 years, Martha Helen Smith.

Because one man’s life story is also a story of the times in which he lived, Wordsmith recaps Kentucky’s past 60 years, including its politics. The pages are filled with public figures who dominated the last half of the 20th century: Earle Clements, Alben Barkley, Happy Chandler, Bert Combs, Wilson Wyatt, Ned Breathitt, Louie Nunn, Julian Carroll, John Sherman Cooper, and others. Not to mention people who worked largely behind the scenes, such as Ed Prichard, J.R. Miller, and Emerson “Doc” Beauchamp, a Democratic kingpin and fellow resident of Russellville of whom Smith writes, “It didn’t take me long to figure out that he knew the preferences of every adult in the county and most of the children.”

Smith’s recollections of these men recall times when Kentucky rose above its image to achieve real progress in areas such as civil service, judicial reform, education, healthcare, historic preservation, and the arts. Such accomplishments were a sharp contrast to the government by stalemate that has plagued the state and the nation in recent times.

Last year, Smith published a second book, Kentucky Cured: Fifty Years in Kentucky Journalism. Less a memoir than an expanded appendix to Wordsmith, it contains some new material and previously published articles on a wide array of people and subjects. As O. Leonard Press, KET’s founding director, writes in the forward: “To meet Al Smith for the first time is to feel that you have known him forever.”

—Gary Luhr is executive director of the Association of Presbyterian Colleges & Universities and was editor of the Rural Kentuckian then Kentucky Living from 1979 to 1994.