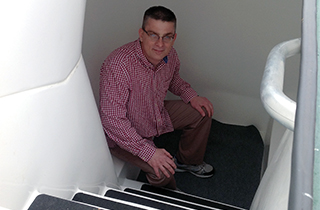 “I was just a child then, but even now I don’t have to close my eyes to see it,” says Paul Gabehart of the equivalent of an EF4 tornado that ripped across the Green River Reservoir before touching down just a few miles from where his family lived.

“We were sitting in a car less than one-half mile from its path,” Gabehart recalls. “That definitely gave me a lesson in the power of nature. The storm’s path was relatively small—just over a quarter of a mile wide at its base—but it tore up everything it came across.”

The experience stayed with Gabehart, who is now the owner of Campbellsville-based Kentucky Storm Shelters LLC, a company that offers two types of shelters.

Lots of choices
There are several ways to categorize storm shelters. One is by what they are constructed from—usually fiberglass, concrete, or steel. Each has its advantages and disadvantages.

Another important distinction is the rating.

This indicates the severity of the storm the shelter can withstand and still keep the occupants safe. While there is no government agency or other authority that says which type of shelter is best, the Federal Emergency Management Agency (FEMA) sets shelter standards for tornadoes.

The National Storm Shelter Association has also established a shelter standard. The Wind Science and Engineering Research Center at Texas Tech University performs tests on shelters and various shelter components to see if they meet both sets of guidelines.

Nearly all safe rooms and shelters on the market are rated to withstand an EF5 tornado, one of the strongest. (Click Severe weather emergency plan to locate a list of resources, including companies that sell and install storm shelters in Kentucky.)

Shelters can also be categorized by where they are located—underground or aboveground, whether in a residence or in a community.

Underground shelters are usually safe from the biggest danger in a severe storm—flying debris. However, you might not be able to get to an underground shelter in time. Installation can also be a problem depending on the type of rock and water table where you live, or in parts of Kentucky where caves are near the surface.

Shelters within a home are easier to get to in an emergency but can be harder to add to an existing residence. Many are being included in new homes, often under a concrete garage, although they can be located anywhere. These are often called safe rooms, a relatively new term.

The terms storm shelter and safe room are often used interchangeably. (However, FEMA considers a safe room to be a particular type of shelter related to protection from tornadoes and hurricanes. FEMA’s Ready Web site, www.ready.gov/tornadoes, provides helpful information under the tab “Preparing a Safe Room.”)

The terminology is not as important as finding the best shelter for your needs.

The right shelter for you
After tornadoes touched down near their home three years ago, Marty Kreft and his wife, Janet, members of Cumberland Valley Electric who live in Corbin, started investigating options and saving for a shelter. They now own a precast concrete shelter that is partially buried in their back yard. It is one purchase, Marty jokes, that he hopes to never use.

The Krefts’ shelter from Pyles Concrete in Columbia, which is served by South Kentucky RECC, will hold six to eight adults. The selling point for the Krefts was the door to the unit. “The door can be the weakness,” Kreft says, “but ours will stand up to most anything. It’s what sold us.”

“Our unit has been developed and tested for years through Texas Tech University’s Wind Science and Engineering Research Center,” says David Moore, vice president of shelter operations at Pyles Concrete. “It weighs 17,000 pounds and will hold up to 12 adults. It will withstand an EF5 tornado.”

The couple looked at other types of shelters before making a decision.

“We looked at units that are bolted into the concrete slab of your garage and we really liked them,” Kreft says, “but we just didn’t have the room, so they wouldn’t work for us.”

“They are not damp and wet,” Gabehart says of the fiberglass shelters. “They are strong, with a snow-white finish inside. They are easily lit and have an open feeling while providing maximum protection against storms.”

National Storm Shelters of Smyrna, Tennessee, uses welded hot rolled steel (HRS), which is dipped into hot zinc to galvanize it, making it water- and rust-proof. They offer above-ground and belowground versions. The steel units are secured in place with concrete.

The company also offers safe rooms, which are typically fastened to the garage floor.

“You don’t have to go out in the rain or lightning to get to them,” says Jeff Turner, president and owner of National Storm Shelters, “and you can keep valuables in these rooms because the humidity and temperature in the room are the same as the surrounding room.”

According to Turner, the lids on the belowground units are so strong you can park your car on top with no damage to the unit. The lid also slides open horizontally, which makes it much easier to open than a door that must be pushed up and pulled down.

As you might expect with all the options, the price range for storm shelters varies widely. Expect to spend anywhere from $3,000 to $9,000.

“Storm shelters are not something that you trade in after you drive them up and down the road for four years,” says Moore. “You hope you never have to use it, but if the situation arises, you want peace of mind. Your house may be gone. Everything you own may be destroyed, but you still have your life. You can’t put a price on that.”

Families can stay prepared for severe weather and natural disasters with information from the National Weather Service, including items to pack for your emergency shelter and how to practice for drills—click “Severe weather emergency plan.”