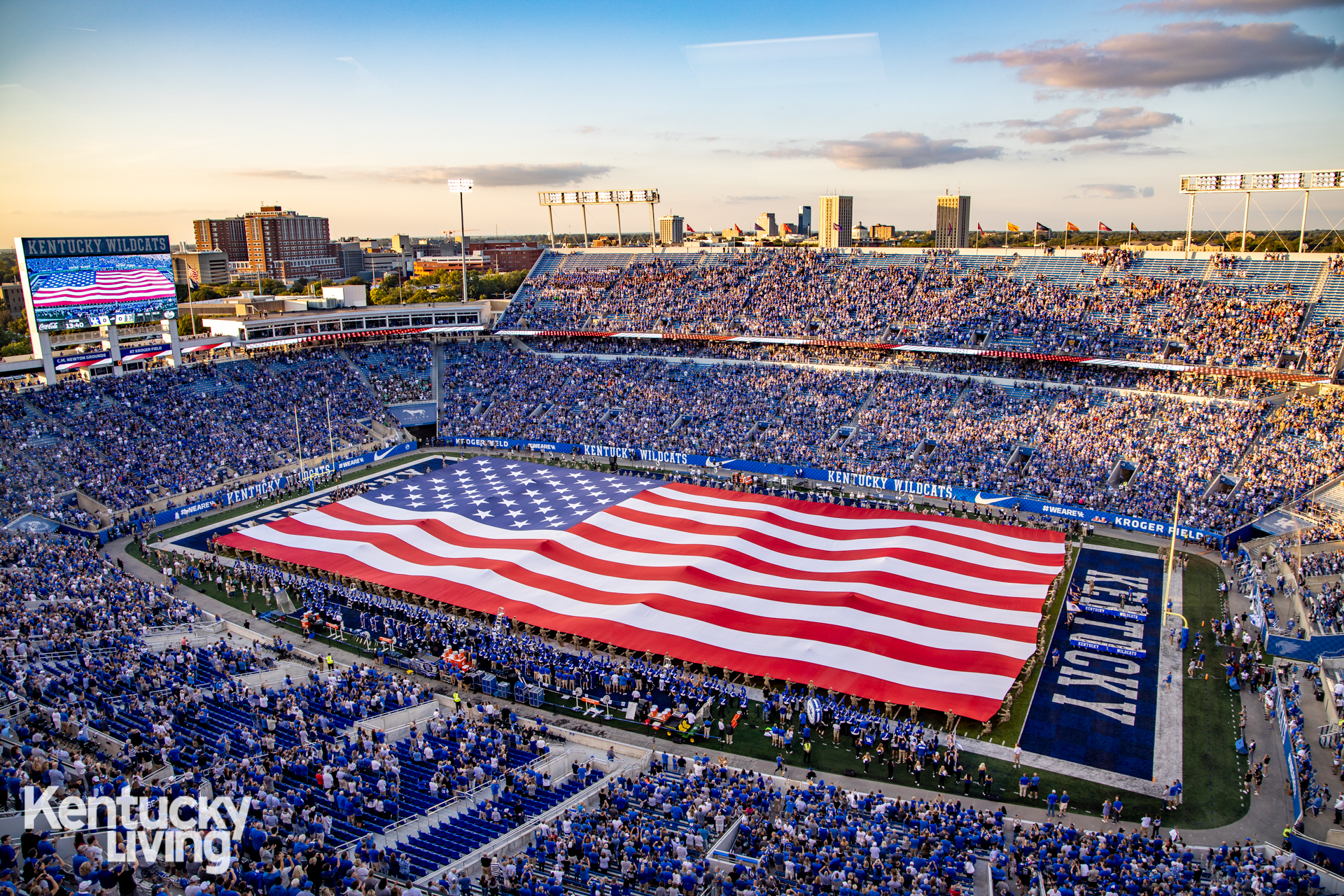 Thanks to members of the U.S. Armed Forces and first responders, the sea of blue at the University of Kentucky’s Kroger Field included red, white and camouflage for the Saturday, Sept. 7, 2019, football game versus Eastern Michigan. UK’s annual Heroes’ Day honored active duty and reserve military along with police, firefighters and first responders.

Stretched across the entire field, the UK Air Force ROTC and UK Army ROTC presented a massive American flag for the national anthem. During timeouts throughout the game, Kroger Field recognized military VIPs and other personnel. Meanwhile, an entire end zone of Kentucky Army National Guard soldiers extended their enlistments, raising their right hands to take the oath of reenlistment read by Col. Robert Larkin.

Calling Heroes Day “my favorite game of the year,” UK senior linebacker and team captain Kash Daniels celebrated the patriotic display “because we’re representing something bigger than football and something I hold close to my heart.”

A native of Paintsville, an eastern Kentucky town with a population of less than 5,000, Daniels is a fan favorite and didn’t disappoint Saturday with his first career interception and five tackles.

The Wildcats put 14 on the board in the first quarter en route to a 38-17 victory. Kentucky is now 2-0 on the season, and the win over Eastern Michigan marked Kentucky’s seventh consecutive nonconference win. Kentucky has won 12 of its last 15 games, tied for the second-best record in the Southeastern Conference (SEC) in the last 15 games. It’s UK’s best record in a 15-game span since Dec. 31, 1976, through Sept. 30, 1978, when the Wildcats were 12-2-1 during that time.

The victory came at a heavy price, however, as senior starting quarterback Terry Wilson tore his left patellar tendon and will miss the remainder of the season. Wilson will be replaced by Sawyer Smith who transferred from Troy University, Alabama, last year after winning five of seven games for the Trojans. Heading into week three, Kentucky faces a challenge, going up against their first SEC opponent—the No. 11 Florida Gators (2-0), who are coming off a 45-0 win over the Tennessee-Martin Skyhawks. Kentucky is seeking its first home win against the Gators since 1986 and the first series winning streak since 1976-77.

Check out our photos from the game below: