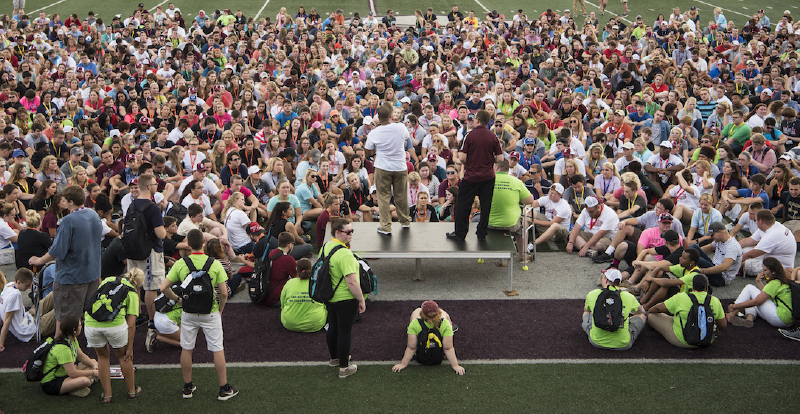 Prepare your kids before they head off to college

“Let’s see what you can do with the laundry,” Kendal Orwick challenged her soon-to-be college freshman son.

Next came lessons on finances, time management, shopping for food, and cooking.

Looking back, son Luke had settled happily and easily into high school, reaching his senior year in 2016 with little of the drama high school can bring. He has lots of friends and excels academically, with a 3.5 grade point average. He is even helping his father at the family-owned printing business.

Even so, his dad, Dave, and mother, Kendal, members of Blue Grass Energy Cooperative, are shaking up what many parents would consider a high school fairy tale come true.

Why is that? They know Luke will be leaving for college in a few months and he will need a host of skills that he has yet to acquire. They consider it their job as his parents to help prepare him for this, just as they

helped him prepare for each milestone since his very first steps.

So near the beginning of Luke’s junior year, the Orwicks, of Nicholasville, started what you might call College Life Skills 101—helping him acquire some basic but essential nonacademic skills that he will need to succeed on his own.

“We didn’t buy a book,” says Kendal. “We didn’t make a checklist. Kids tend to check out when you make a checklist. We just knew there were things he would need to be able to do besides schoolwork, so we started sneaking in a little instruction here and there.

“We try not to overburden him, but Luke is my youngest, and I had babied him more than Zack (his older brother). I have always done everything for him.”

“Luke could do laundry a bit,” Kendal recalls, “but he wasn’t efficient and he wasn’t careful. He didn’t sort colors or realize if he put a red towel in with white shirts he was going to have pink shirts.”

Kendal challenged Luke one day to do the laundry on his own. Afterward, she showed him better ways to do it so he didn’t have to rewash clothes.

They went through the same process with the dishwasher until Luke had mastered both. One major lesson throughout: do it right the first time and you won’t have to do it again.

You are the boss of you

Financial management started when Luke opened a checking account. A good first step, his parents thought, but he kept forgetting his bank ID and password. And there were other issues.

“It wasn’t really about a checking account,” Kendal says. “It was about money management. The debit card became the main issue. He had to learn that just because he had a card didn’t mean he had money in the bank. That was hard for him to get. He had to fail a few times before he got it.”

Luke now does all his own banking.

The other management issue—time management—is one the Orwicks are still working on as Luke finishes his final months in high school.

“Luke has become a stickler for being on time,” Kendal says. “He arrives early at school every day. He doesn’t like to be the center of attention and found that being late puts him there.”

He also completes homework on time with no parental oversight. “Academics come easily to Luke,” Kendal says, “but college is going to be totally different. We keep telling him it will all be up to him. No teacher is going to make sure you understand it or that you are in class.”

Also on the management side: home management. Luke has become security-conscious. He routinely locks the doors, turns on the outside lights, and takes care of the dogs. Dave and Kendal want those tasks to become a habit, so they are reinforcing them now.

Not everything came easily.

Although Luke now drives himself back and forth to school, he doesn’t like to drive and doesn’t drive anywhere else routinely. He would prefer to ride with friends.

Luke is part of a modern phenomenon in that regard. A 2013 AAA Foundation for Traffic Safety study found that most American teenagers are delaying getting their driver’s license. According to the report, only about half (54 percent) were licensed before their 18th birthday. Twenty years ago, more than two-thirds of teens had their license by the time they turned 18.

Food preparation and shopping are other “rather nots” for Luke.

“We send him out to buy things for us, pretending that we don’t have the time,” Kendal says. “He will do it for us even though he hates to shop. He knows how to shop the sales. He knows if one brownie mix is on sale and another is not, we are going to buy the one on sale.”
Even if it is brownies, Luke is not interested in preparing food, according to Kendal.

“He knows how to use the microwave and can make soup and cinnamon rolls. He is not going to starve, but truthfully I am still scared of him using the stove. That makes it hard. Plus, it is easier for me to prepare the meals.”

To get over the reluctance of both, it fell to Dave to help Luke learn to cook. They are a more natural fit for this skill, Kendal says.

That brings up an important lesson Kendal says she learned with Zack, now a senior at the University of Louisville.

“Luke and Zack are very different kids,” she says. “You have to match the right parent with the right kid. I am the one taking the lead with Luke, but Dave took the lead with Zack.”
Kendal admits that she is also more patient the second time around.

“I am not freaking out this time,” she says. “It will all work out. I have learned to pick my battles and to make this stuff fun—not a chore.”