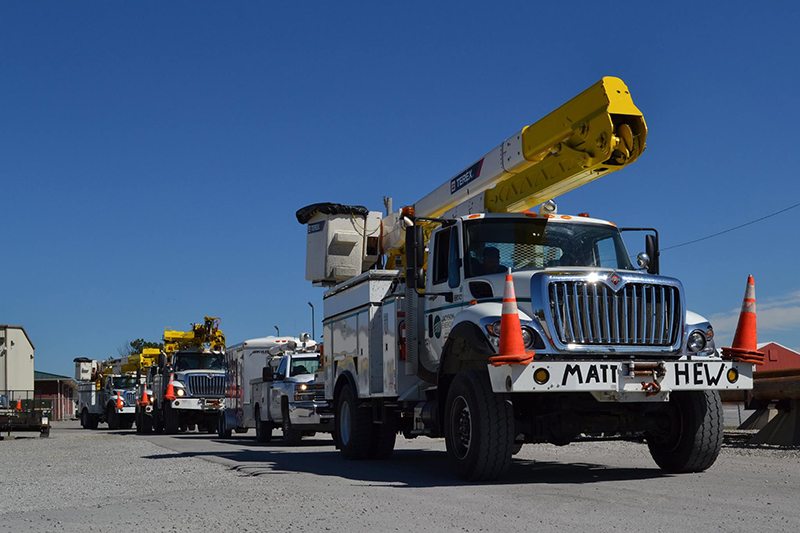 Packing wind gusts of more than 100 miles per hour and pounding rain, Hurricane Matthew left a trail of destruction from the Caribbean up the East Coast of the United States from Florida well into North and South Carolina, where it made landfall last October 8.

Then, another force descended on the same area. But this force—148 linemen, mechanics, operation supervisors, and safety personnel from 18 Kentucky electric cooperatives—was there to restore electricity and, with it, some normalcy and comfort to those in the storm-ravaged area.

It was the largest response for mutual aid sent by Kentucky electric cooperatives since Hurricane Katrina in 2005.

Likewise, Kentucky receives help from other electric cooperatives, such as the devastating ice storm of January 2009.

Six co-ops head for the coast

“JPEC is part of a network of more than 900 electric cooperatives across the nation,” says Dennis L. Cannon, JPEC’s president and CEO of the Paducah-based co-op. “During emergencies, we help each other restore power quickly and safely.”

A baker’s dozen to the rescue

“Without mutual aid from sister cooperatives, members would experience extended outages into weeks and months,” says Carol Wright, CEO of Jackson Energy in McKee and the board chair of KAEC’s Safety Committee. “We help each other in the greatest times of need, and that is our cooperative spirit.”