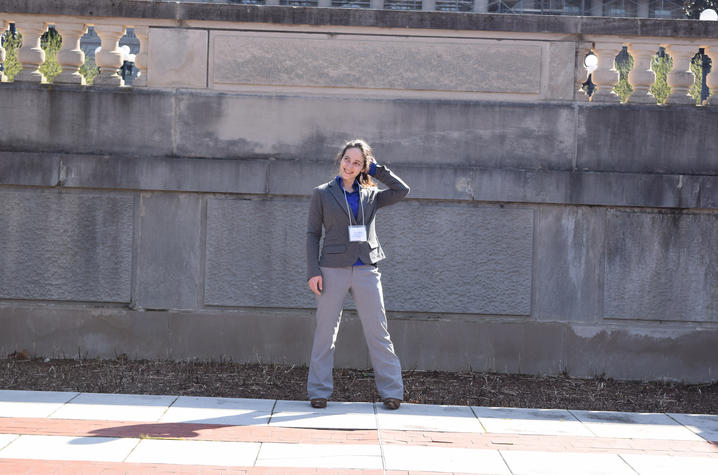 Martha Tillson outside of the Capitol in Frankfort, after presenting at the annual "Posters at the Capitol" undergraduate research event in March 2017. Photo: UKNow

LEXINGTON (Dec. 13, 2017) — Martha Tillson made several attempts to attend college post-high school but never felt like she had a home or purpose at either of the schools she attended. After deciding to leave higher education and her home in New England behind, she spent the better part of the next eight years of her life hitchhiking across the United States.

Taking to the road with a backpack, she spent her nights sleeping outdoors in the woods or under bridges and overpasses. She panhandled for food and rides. There were times when she played her trumpet, which she later traded out for an accordion, on sidewalks for a few dollars or food. She would head for destinations known to hire seasonal migrant workers, and accept offers for day labor when opportunities arose. There did come a point, however, when she decided she wanted to live a more settled life.

After a friend led her to Lexington, Tillson fell in love with the town so much that she decided to enroll at the University of Kentucky.  She felt a strong sense of community at UK and using the experiences she had traveling the U.S., found a purpose at the UK College of Social Work. This coming Friday, Tillson will be one of the student speakers at UK’s December Commencement where she will also receive bachelor’s degrees in both social work and psychology.

“The life experience I’ve had has informed my research in social work,” Tillson said. “Hitchhiking immersed me in the places I traveled and gave me the opportunity to honestly connect with the people I met in a way that wouldn’t have been possible otherwise.”

Many of the people Tillson met in her travels struggled with substance misuse, which has informed her research interests. While at UK, Tillson has been employed by the UK Center on Drug and Alcohol Research. She has received several honors and awards for her research including two Oswald Research and Creativity Awards. Her research has been published in several academic journals, and she has presented at national conferences.

“People who choose this line of research, and the social work profession generally, tend to do it because they have a real passion to help other people,” she said.

After graduation, Tillson plans to continue her work at the Center on Drug and Alcohol Research and explore what path she might take in graduate school.

To read more about the UK story and how you can support continued investment in your university and the Commonwealth, go to: uky.edu/uk4ky. #uk4ky #seeblue