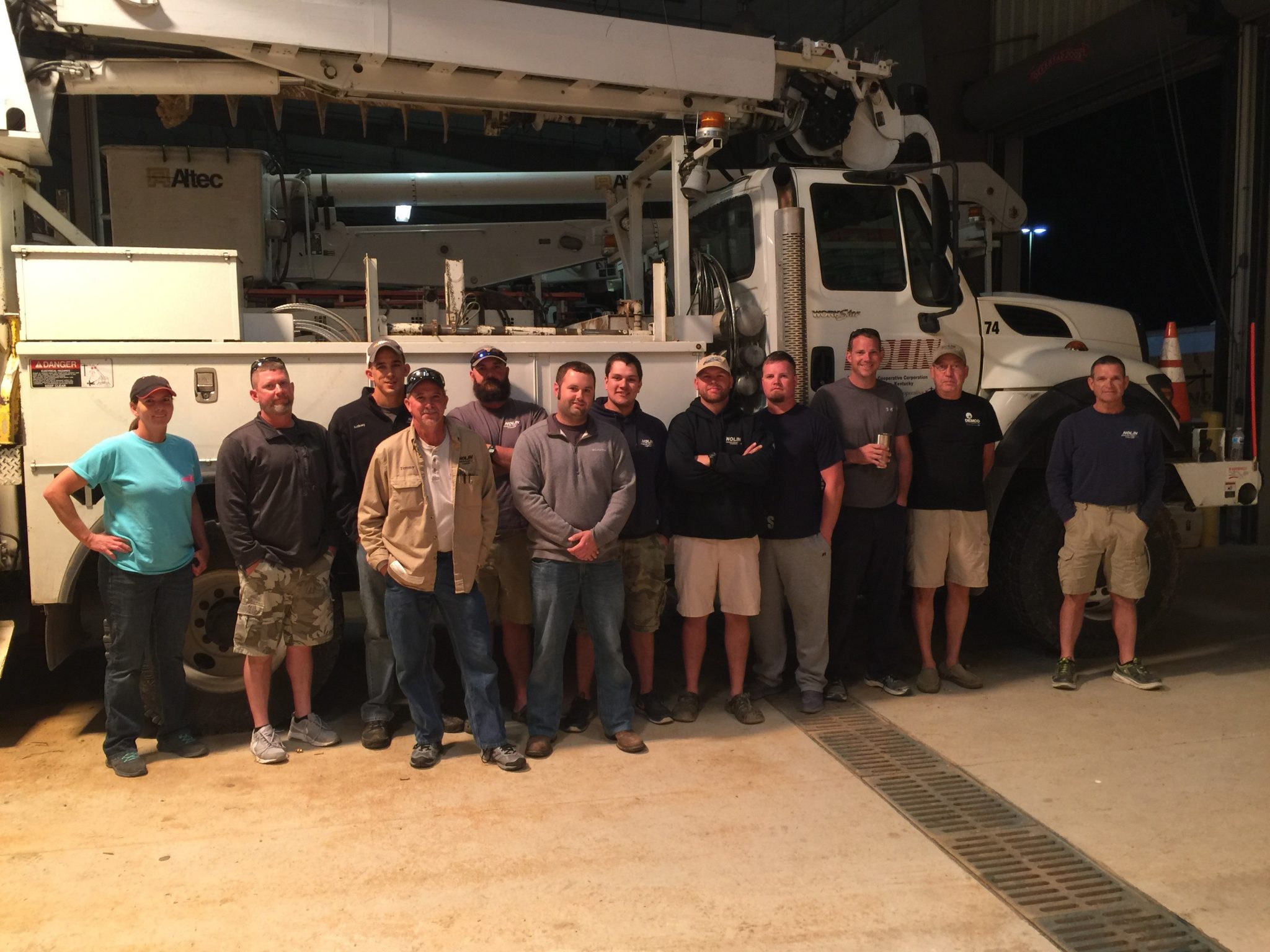 Lineman from Nolin Rural Electric were deployed to southeast Georgia.

Kentucky linemen arriving in Georgia, more on the way

LOUISVILLE (September 11, 2017) –  Hurricane Irma has knocked out power to approximately 170,000 customers of Georgia’s electric membership cooperatives (EMCs) as of Monday morning, including in areas being assisted by crews from Kentucky electric cooperatives.

Overnight, as the storm made landfall in Georgia, hurricane-force winds began toppling trees onto power lines and causing numerous power outages. At this time, the majority of outages are located in south and southeast Georgia.

Officials warn that outages will increase throughout the day and evening as strong winds and heavy rain contribute to worsening conditions.

Crews from six Kentucky electric cooperatives are already in Georgia, with crews from two other Kentucky co-ops set to depart for Georgia once the storm passes. Additional Kentucky co-ops have also volunteered to send crews and are awaiting assignment.

The Kentucky crews are assigned to individual Georgia co-ops who have requested their assistance. In concert with 16 other states, the Kentucky Association of Electric Cooperatives coordinates the Kentucky co-op mutual aid response.

The top priority of each local Kentucky co-op is service to its own member-owners.  Before committing resources to mutual aid requests, each co-op ensures it has ample crews available for all local needs, including routine maintenance and emergencies. In addition, Kentucky co-ops are closely monitoring the projected path of Hurricane Irma to assess whether it will affect co-op territory, here.

In Georgia, three crews each from Owen Electric and South Kentucky RECC are assisting Coastal Electric Cooperative which serves roughly 573 square miles with 1,491 miles of line in three counties on the Atlantic Coast.

Three crews from Nolin Rural Electric Cooperative, based in Elizabethtown, are deployed to Excelsior EMC, which serves eight counties in southeast Georgia.

Crews from other Kentucky electric cooperatives are also expected to respond to Hurricane Irma mutual aid requests once the storm passes.

In addition, United Utility Supply Cooperative is also responding to Hurricane Irma needs. The Kentucky-based co-op has shipped three truckloads of electric utility supplies to Alabama and is preparing its storm stockpiles in warehouses in five states.

Every co-op has an emergency plan, and part of that planning includes what is both a unique and an effective approach to emergency management and disaster recovery: mutual assistance. When disaster strikes, co-ops quickly deploy support staff and equipment to emergency and recovery zones to help sister co-ops restore power.

For instance, at the height of the recovery period in Kentucky’s 2009 ice storm, more than 1,100 electric co-op employees from 14 states assisted with restoration efforts. An equal number of contractor workers were employed. Furthermore, hundreds of additional employees from less-damaged Kentucky electric co-ops and municipal utilities assisted the highly-damaged Kentucky co-ops.

“Cooperation among cooperatives is one of our guiding principles for a good reason: It helps to make everyone’s jobs easier and make their lives better,” says Clarence Greene, director of safety and loss prevention at the Kentucky Association of Electric Cooperatives, the statewide association providing services to each electric cooperative in the state.

“We have always felt that what defines a co-op is reliability and family. In every corner of Kentucky we serve, we know our members and take care of them like family, and that expands to national electric cooperatives in times of need,” KAEC President Chris Perry said. “We are eager to help our co-op families in any way we can.”