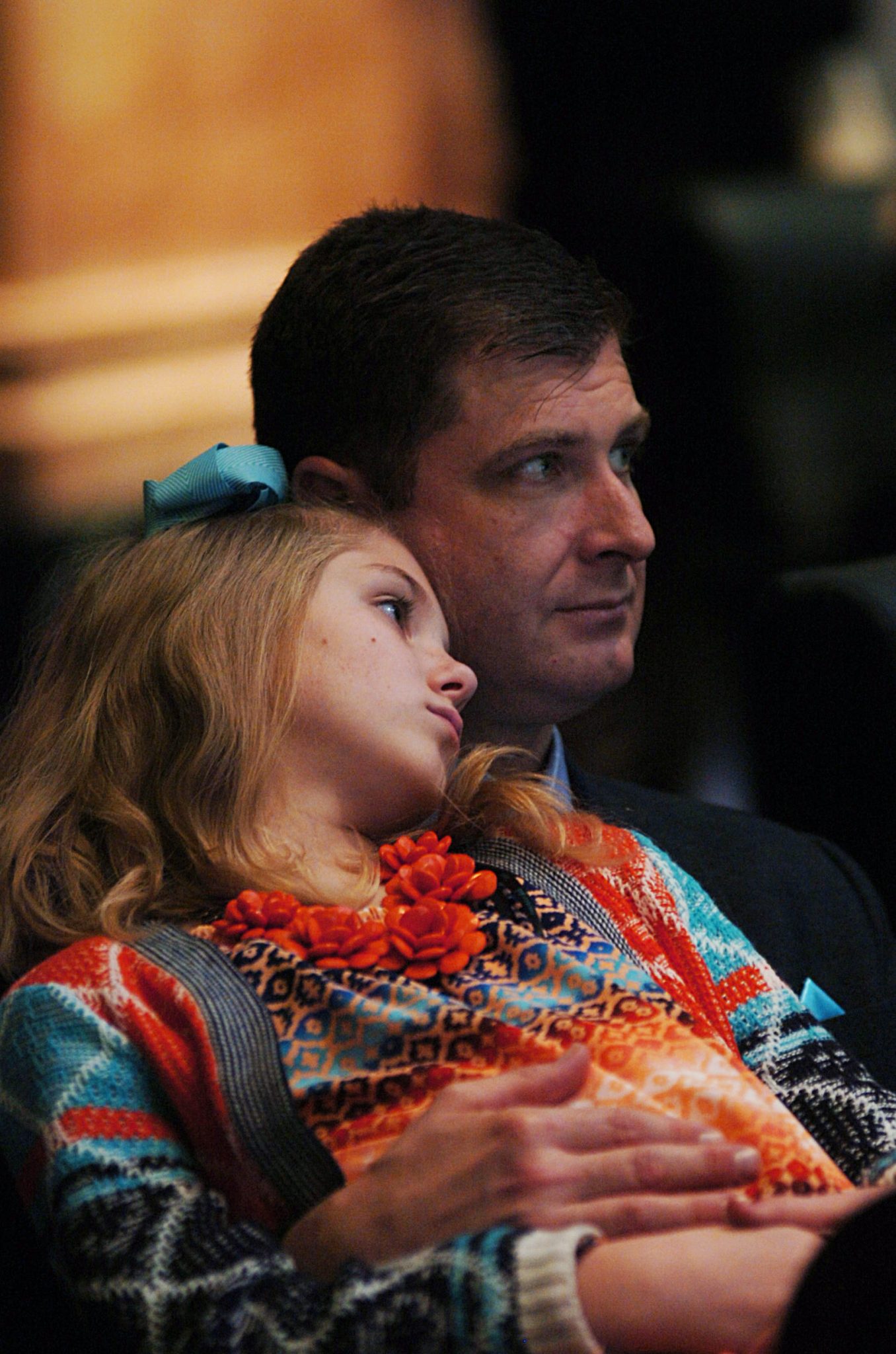 Rep. Brian Linder, R-Dry Ridge, holds his daughter Chloe on his lap towards the end of the day in the House. Photo: LRC Public Information

FRANKFORT–Improving the lives of Kentucky’s children was on the minds of the state’s legislators this week as several bills made their way through the General Assembly. Included were measures to stabilize the lives of children in foster care, stem the tide of young people being recruited into criminal gangs, and broaden the scope of background checks for adults who work in proximity with children.

Senate Bill 190, which passed the Senate on a 35-0 vote and now moves to the House of Representatives, would enable a child placed in foster care to remain in the same school even if the foster home is in a different school district. Currently, children are required to attend school in their home district, so those who enter foster care or are moved from one home to another must switch to the district in which their new home is located, causing further disruption in their lives.

The bill states that if placement cannot be found in the district in which the child is already enrolled, transportation should be provided to the child’s home school. If it is determined that it is in the child’s best interest to switch schools, the legislation would require the new school to enroll the child immediately, without waiting for records that might be delayed.

Also advancing to the House was Senate Bill 236, which would enable parents to request a background check for child abuse or neglect, through records maintained by the Kentucky Cabinet for Health and Family Services, before hiring a nanny or babysitter.  The measure also would require school superintendents to conduct similar background checks for anyone being considered for employment, including non-teaching staff members, and tighten the practices of youth camps with regard to employees and volunteers with a record of child abuse or crimes against children.

The Cabinet for Health and Family Services would be required to provide a letter of clearance if its records showed no findings of abuse or neglect against the individual, and to notify the child care provider or potential employee of the results of its check.

House Bill 315, which now moves to the Senate for its consideration, is designed to crack down on gang violence by, among other measures, protecting children from being recruited into gangs or forced to commit crimes.  The bill would stiffen penalties for adults who recruit children into gangs, enable anyone who encourages another individual to join a gang to face enhanced charges for repeat offenses, and establish minimum sentencing requirements for some misdemeanors committed by defendants found beyond a reasonable doubt to have been a gang member when the crime was committed.

Also moving to the House was Senate Bill 195, which would enable juvenile offenders to have their criminal records expunged, or erased completely. Although adults who have been convicted under age 16 can now file a court motion to have their juvenile records removed, this measure would create a process for expungement of felony juvenile records two years after the offender reaches adulthood or is released from commitment. However, anyone who has convictions for felony or public offenses in the two years prior to applying for expungement or who has pending charges would not be eligible for expungement.

Several other bills advanced this week, including:

House Bill 333, which would limit prescriptions for opioid pain killers like fentanyl, morphine, and oxycodone to a three-day supply with certain exceptions for medical need. The measure, which now awaits consideration by the Senate, would also increase jail time for anyone convicted of selling opioids on the street.

Senate Bill 4, which would require peer review panels to assess malpractice complaints against a healthcare provider before a plaintiff could file a case in court based on that complaint. The panels, which would include an attorney and three healthcare providers licensed in Kentucky in the specialty in question, would issue an opinion about the validity of the claim, and that opinion could be used as evidence in court if the case proceeded. The bill now has passed the House on a narrow vote and returns to the Senate for final passage.

Senate Bill 11, which would eliminate a number of obstacles to constructing and maintaining nuclear power plants in Kentucky, including changing the requirement that facilities have the means for permanent disposal of nuclear waste. Instead they would be required to have a plan for its safe storage as approved by the Nuclear Regulatory Commission. That measure now awaits consideration by the House.

Senate Bill 176, which would make certain military surplus vehicles “street legal” by enabling Kentuckians to receive a title and license for them, once they were retrofitted with appropriate equipment to meet federal regulations. The measure passed the Senate 37-0 and now moves to the House of Representatives.

House Bill 261, which would ensure that anyone convicted of a DUI in Kentucky could only get a more lenient, first-offense sentence once in a lifetime. This would reverse the current law that enables someone with a DUI conviction more than 10 years old to essentially be given a clean slate and have a new conviction considered as a first offense. The measure will now be considered by the Senate.