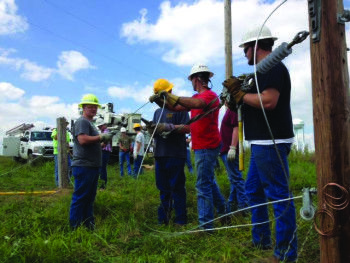 High school Future Farmers of America seniors exploring careers got hands-on experience during several work days spent with linemen from Fleming-Mason Energy Cooperative.
“The students built a 7-0 pole tap, framed their pole, and strung conductor,” says Stephen Harn, operations superintendent for the cooperative. “They saw what all goes into a power line and went through an inspection. The final day they saw firsthand what happens when a power line blows.”
“The students took pride in their work, and I was impressed with them,” says Harn. “Several even talked to us about becoming an engineer.”
[gap size=”6.3em”]

Out of the darkness

Today, most of us take electricity for granted but two former members of Nolin Rural Electric Co-op remember when the lights first came on.

“You can’t imagine how much difference electricity made,” says Jack Scott in the new video. “It’s hard to even say because of the differences in how you could do things.”

“The most important lesson from electricity coming to Kentucky would be the story of how people worked together to make things happen because that is what the co-op is,” Alice Scott says.

In the video below, the Scott’s speak about electrification in rural Kentucky in the 1930’s: