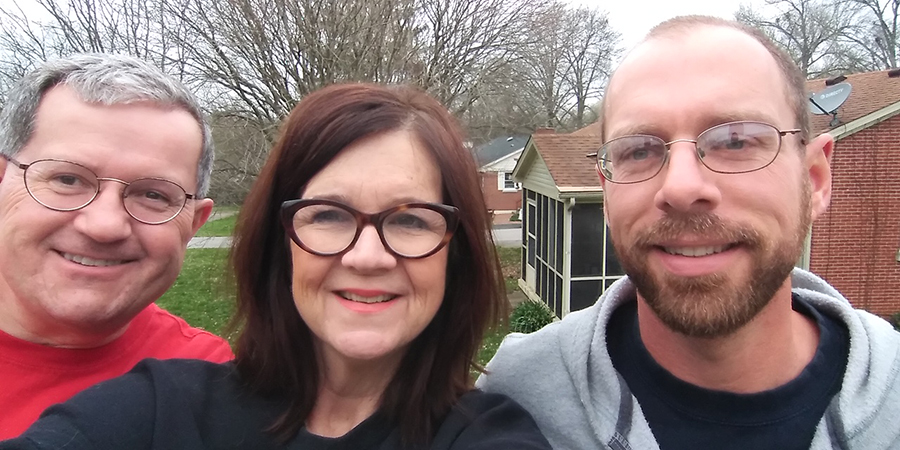 Ken Bickham, left, with wife Alisa, and Preston. The three have lived together for a year as Preston gets back on his feet. Photo: Alisa Bickham

So, when Ken and his wife, Alisa, got to know Preston, they offered to let him live with them while he worked to get back on his feet financially because of a past addiction that he is in recovery from.

Preston is now working in a job that pertains to his college degree and he is giving back to the community through several different venues.

“It has been a joy to be a small part of someone’s journey,” Ken says.

Most know Ted Hampton as the president and CEO of Cumberland Valley Electric, Gray, where he is deeply involved in the Knox and Whitley County chambers of commerce and participates in the Tri-County Industrial Commission. His work for the co-op is designed to help the community grow and attract jobs.

Ted also has another job—that of beekeeper.

After a friend asked Ted to help him with his bees one day, Ted bought beehives and took up the trade himself. Soon his bees were producing 60-100 gallons of honey each year.

This is where you can’t tell CEO Ted from Beekeeper Ted. Hampton wanted his honey to help others just as his work at the co-op helps others. A young boy with asthma needed honey but couldn’t afford to buy it. Ted gave it to him. Older people in the community were in the same situation, and Ted provided honey to serve their needs.