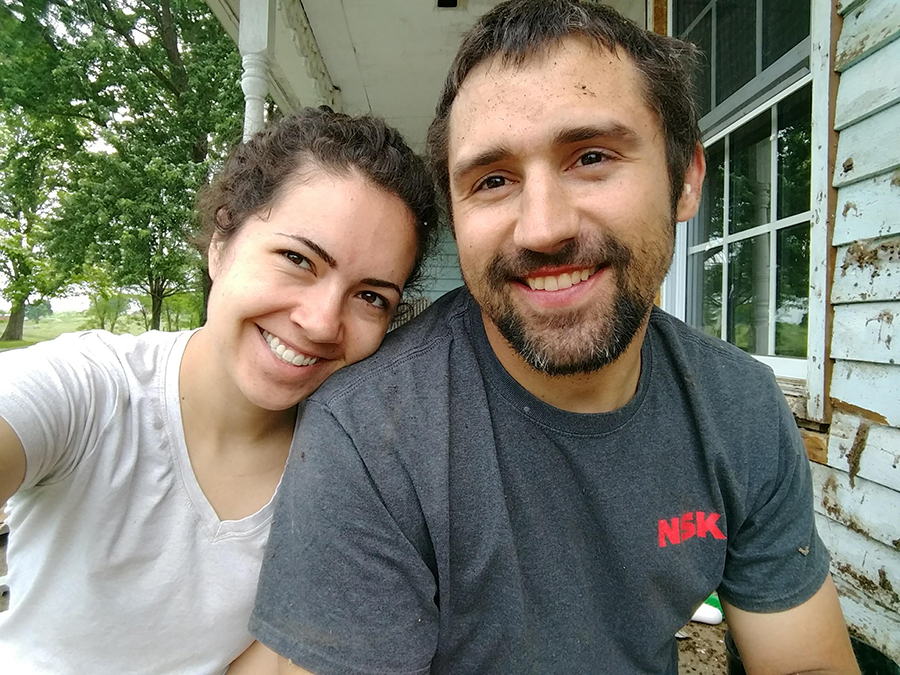 Paige and Brandon Sander chronicle their adventures in renovating their 114-year-old home on the Instagram account @farmhousevernacular.

Couple preserves the past in their 114-year-old dream home

In summer 2017, Paige and Brandon Sander found their new home—and their next big project. The house near Dry Ridge in northern Kentucky, served by Owen Electric, was built around 1905 in the farmhouse vernacular architectural style popular in rural parts of the eastern United States. These farmhouses are simple and straightforward, built by local carpenters and neighbors, and built to last. At first sight, Paige and Brandon knew it was the house for them.

When the couple decided it was time to move on from the suburban starter home they purchased after college—both went to the University of Kentucky for engineering, where they met—they had a list of criteria to fill. They wanted land and outbuildings: Paige grew up on 200 acres and Brandon on 500. They wanted a bedroom, bathroom and laundry on the first floor so they could age in place and never move again. And they wanted three bedrooms for a future family.

“I was checking listings every single day trying to find something,” recalls Paige. “And then one day, I stumbled across this house. And I pretty much got to the third picture and I was convinced. I knew, ‘This is our house. We’re done.’”

“We drove down here to see it, just to drive by it. We just wanted to see the area,” says Brandon. “As soon as we came around the bend where you can see the house and the land … our jaws dropped.”

The house sits on 50 acres with a few outbuildings, including a barn. It’s a comfortable commute for their jobs. The exterior was in good shape, but the interior needed some work.

“Walking through it, it took quite a bit of imagination to see what the house could have looked like,” says Paige.

The original owner died in 1944—he’s buried just over the hill—and the home was rented until the 1980s when it underwent significant renovation. Through each renovation, a new face was laid on top of the last, burying the original character of the two-story home under layers of paint, wallpaper and flooring. Now, Brandon and Paige are working to peel those away and return the 1,900-square-foot home to what it may have been.

They started with the hallways, the easiest to tackle and the intersections of project pods that could be shut off behind closed doors. Here, the couple’s first project was mainly drywall and cosmetics—a comfortable space to get their feet wet before moving on. The hallways “touch every other room in the house,” says Paige. “So, we figured we’d do that first, make that mess first. And then all the other projects can be contained just to kind of one room.”

Next, the couple tackled the first floor with the master bedroom. They tore away layers of wallpaper and overhauled the brick chimney. Brandon built a recessed closet into the side of the (nonfunctioning) fireplace and Paige cut custom slate tiles for the hearth. Together, they sanded and refinished the floor.

The Sanders documented the process through an Instagram account, @farmhousevernacular. Showing progress as well as sharing tips on how to DIY, how to solve problems and how to attempt to match the spirit of the original build, the Instagram account began to pick up a following. As the couple and their home gained popularity, a community began to form, following Brandon and Paige as they began to design and build a mudroom and bathroom, as well as start on their kitchen.

“I feel like the Instagram and even the YouTube channel (we just started)—it’s just an opportunity to give people information,” says Paige. “So that maybe things that were done to this house won’t be done to another old house, or someone will see it and say, ‘OK, I can restore it instead of just tearing it out or covering it up.’”

Throughout the process, they’ve not only been able to share tips and how-tos, but they’ve been able to learn from the community. From framing exterior walls to the discovery of “dust corners” in staircases and a working vintage stove, the Sanders have learned a thing or two from the community that has sprung up. This communication also shed light on the number of ordinary folks who have taken on the challenge of renovating their own homes, usually on a budget. Homeowners doing the work rather than outsourcing can save a significant amount of money.

“We’re not paying a contractor to do anything,” explains Brandon. “So, there’s a lot of money saved there. If we mess up on something, it’s not as big a deal because it may not be that expensive to just redo it. And we learn a lot as we go.” The first lesson came in the upstairs hallway when they installed their first window.

“We put it in. And then I thought, ‘Well, we probably need to seal around that somehow,’” Brandon remembers. “And I went back and I started doing some actual research instead of just winging it. And you’re supposed to put all this kind of flashing all over the place. So, we decided in the middle of the winter to go and pull the window back out.”

But the reinstallation benefited them by teaching them how to do the job correctly, Paige says. “And every window we’ve done since then has gone in very smoothly. We’re getting very fast at it. And they feel great, no leaks. No concerns at all. So, we had our one failure, but it taught us how to do something properly. And now we can do it right.”