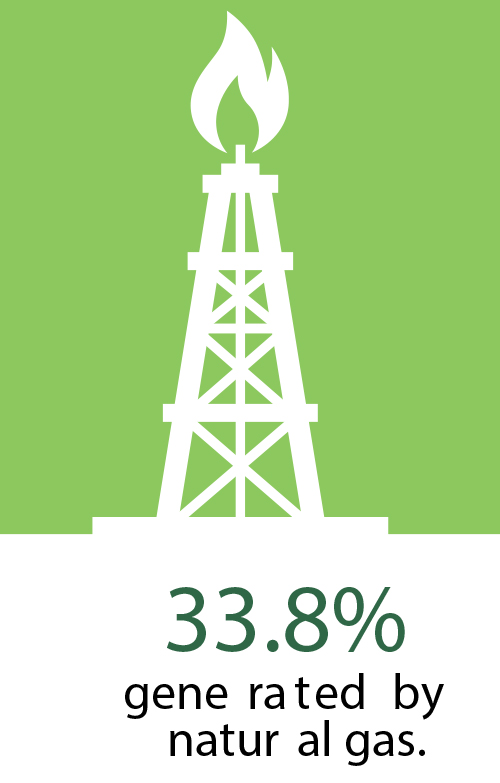 More than 80 percent of our electricity is generated by coal, natural gas or nuclear power. Ancient plants and animals that died long ago turned into coal, oil and natural gas—that’s why all three are called fossil fuels.

Like coal, natural gas comes from the ground, and it can burn in a way that can drive a steam turbine or a natural gas-fired combustion turbine. Unlike coal, you can’t hold it in your hand—it’s a colorless gas, like air, and has to be transported by pipeline. Natural gas can also be piped directly into homes, where it can be burned in water heaters and stoves.

In a natural gas power plant, specially-designed combustion turbines burn the gas to make them spin, generating the electricity. The way natural gas turbines work is similar to a jet engine, and in fact they are a large, complicated version of what you see hanging on airplane wings.

Natural gas electric generation has advantages over coal: The plants are simpler, cheaper to build and require less staff; and they can be shut down and powered up more quickly. Natural gas doesn’t contain as many pollutants as coal, so fewer environmental controls are needed. Natural gas burning also produces less greenhouse gas.

In the past, natural gas was more expensive than coal—until the 1990s when fracking and other new drilling techniques flooded the market. Natural gas prices dropped dramatically and many utilities are using it to replace coal generation.

Natural gas plants now produce about a third of the nation’s electricity, about the same as coal.