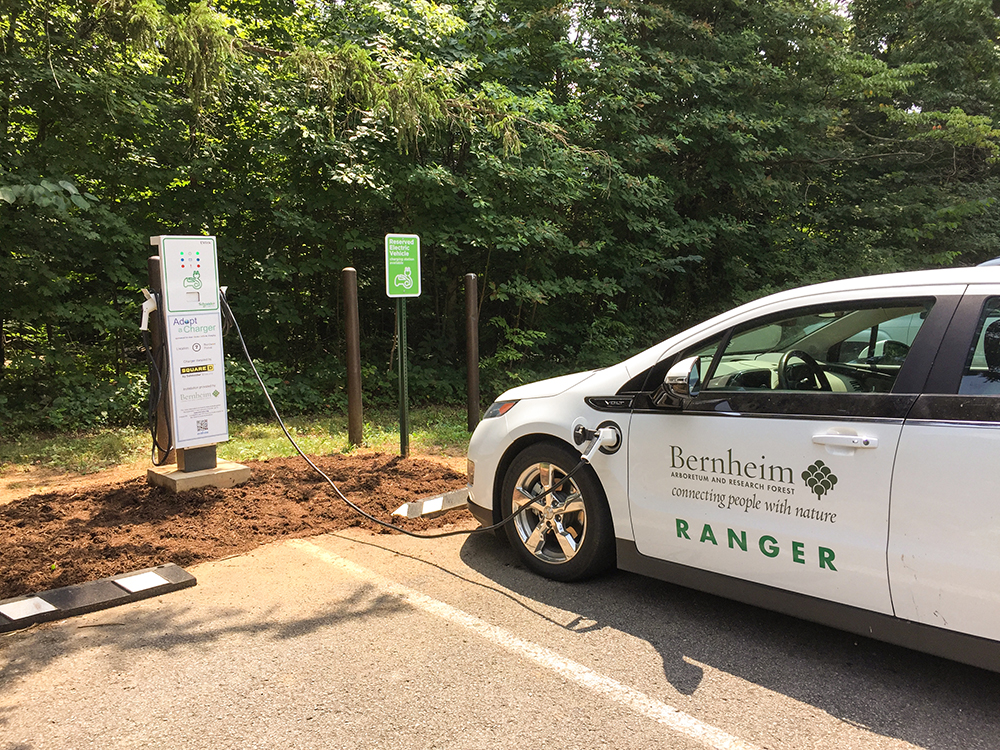 Support for electric vehicles is growing across Kentucky

The Bernheim Arboretum and Research Forest, served by Salt River Electric, is one of the first organizations to install a public charging station for visitors. Just 1 mile from I-65 and on the thoroughfare between Louisville and Bardstown, the arboretum is a convenient place for drivers to stop and recharge.

The arboretum also leads by example by owning a plug-in hybrid Chevrolet Volt and an all-electric cart for on-site touring.

Cliffview Resort, which is served by Licking Valley RECC, is also a charging station pioneer, the first to install charging stations in the Red River Gorge area. As electric vehicles become more prevalent, visitors to the rustic lodge and conference center have responded to the amenity with positive feedback.

“People really like them,” says Blake Bookstaff, owner of Cliffview Resort and himself an electric vehicle owner. “We have had some groups rent our cabins because of it.”

“I test drove a Tesla in Florida and could not believe how fun the car was to drive,” explains Bookstaff. “Before, having an electric vehicle meant that you had to give up features or comfort. Tesla has changed that and has created a car you want to own and drive.”

Bookstaff says his Tesla Model S has made for an easy transition from gas station to electric outlet. “The switch was no big deal,” he says.  “I just plug the car in at night every one to three days and it is ready to go in the morning. What has been great has been not having to go to the gas station.”

Other electric vehicle drivers agree. Mike Proctor, a Blue Grass Energy member, purchased his all-electric Nissan LEAF in 2012. “It was a very easy adjustment,” says Proctor, who installed a charging station at his home to enable the vehicle to fully charge in less than six hours. Since then, he has also purchased a Chevrolet Volt.

Will he ever go back to driving a gasoline vehicle? “Stick with electric, absolutely,” Proctor says.

Stuart Ungar, EVolve KY founder, did his own research before purchasing. “When I was contemplating getting an EV, I set my car trip odometer for a week and recorded how much I drive daily,” says Ungar.

Now the owner of both a Nissan LEAF and a Chevrolet Volt, Ungar says EVs are the future.

“I don’t know anyone with an electric vehicle that would end up driving anything else,” Ungar says. “It’s far superior to gas and diesel vehicles, and healthier… no tailpipe emissions.”

It’s been talked about for generations, but it appears that the age of the electric vehicle is now reality.