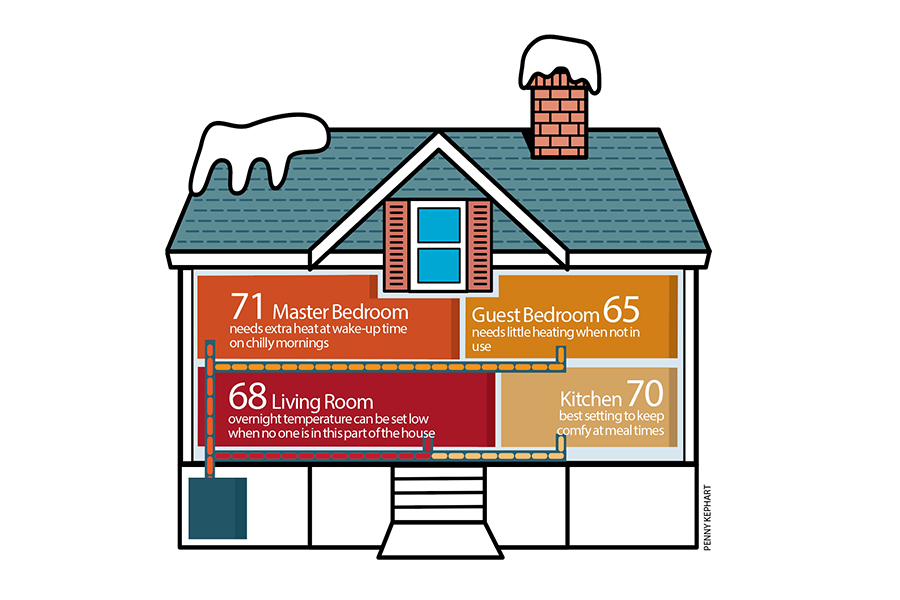 Zone heating and cooling systems match the temperatures in various rooms to what’s appropriate throughout the day.

Some rooms in our house are too hot or too cold. What can
we do to even out the room temperatures? Will doing this
lower our utility bills?—Sean H.

You don’t want all your rooms at the same temperature all the time. A range of temperatures around the clock may be more comfortable.

Many factors influence the air temperature in each room, including the length of ductwork, bends in the duct runs, the home’s orientation to the sun, the number of windows and exterior walls, and what’s going on in a particular room. For example, if you have a large TV in a small room, that can raise the room’s temperature.

According to the Department of Energy, for each degree the thermostat is set lower for an eight-hour period, heating bills can be reduced by up to 1 percent.

The most energy-efficient method to control individual room temperatures is to install an automatic zone control system.

A zone control system opens and closes special duct dampers based upon the actual room temperatures to match the desired temperatures. The type of zone control system that can be installed in a home depends on the original ductwork design. Although ideally the new system would control each room independently, having just three or four zones that control groups of rooms is also adequate.

A programmable thermostat is mounted in each room or group of rooms to control the motorized duct dampers. If the room is too warm, perhaps due to bright sunlight in the afternoon, the damper in the duct leading to that room partially closes.

Automatic zoning systems save energy because temperatures in the various rooms can be kept lower when those rooms are not in use. For example, bedrooms can be kept cool during the day, then in the evening the programmable thermostats will bring the room’s temperatures to a comfortable level just before bedtime.

James Dulley for the February 2015 issue