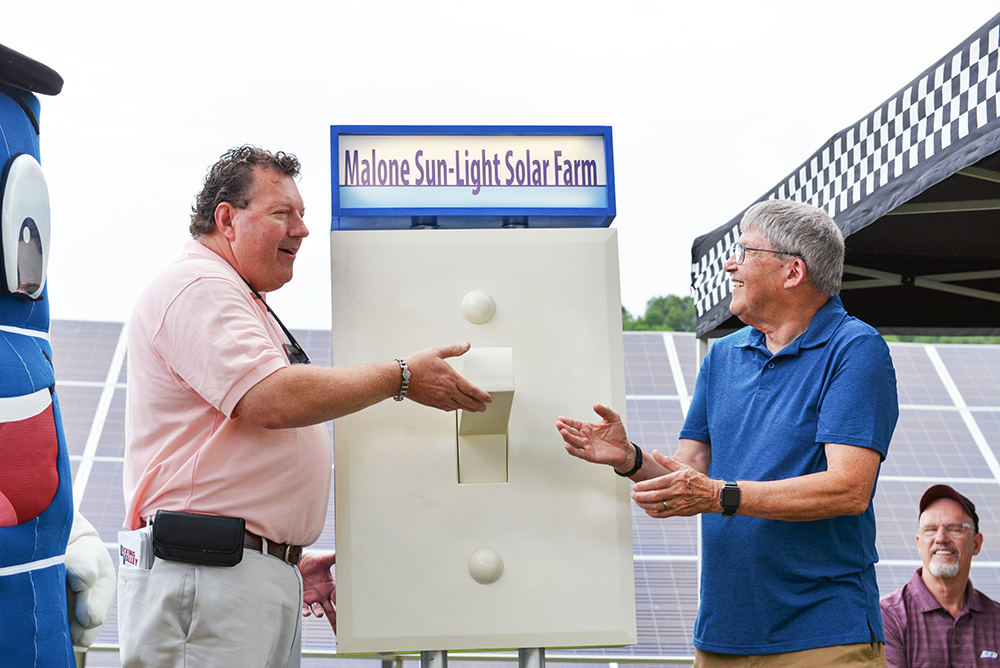 On a hillside next to Licking Valley RECC’s warehouse in Malone, Kentucky’s newest solar farm towers row upon row above Steele Road.

“The project shows that great things can be achieved when people work together,” says Kerry Howard, Licking Valley RECC general manager and CEO. “It’s going to be a great project for students to learn about renewable power.”

Booth, who retired from a successful career at Proctor & Gamble (P&G), invested in Malone Sun-Light Solar to show students that with modern technology, eastern Kentucky has unlimited potential.

“I want kids thinking we are not behind,” says Booth, a native of Campton who attended Eastern Kentucky University and rose to become a vice president of Research and Development at P&G before his retirement. “I want students believing that we can do anything.”

The 932 solar panels at Malone Sun-Light Solar Farm, which was dedicated at Licking Valley RECC’s annual meeting on June 20, provide enough electricity to power about 40 homes.

Booth says students from local schools and EKU will monitor data during different times of the day and seasons of the year.

“Students will mine the data to learn about the production of power, and they will learn how to extract learning from a large database,” he says.

John May, manager of Administrative Services at Licking Valley RECC, says the co-op installed transformers and provided the land. Licking Valley’s 17,000 members in Breathitt, Elliott, Lee, Magoffin, Menifee, Morgan, Rowan and Wolfe counties will benefit by getting renewable power at a competitive price.

Last year Licking Valley and Kentucky’s Touchstone Energy Co-ops dedicated Cooperative Solar Farm One in Winchester. “The new farm in Malone demonstrates that we continue to be leaders in renewable power,” says May.

Booth, a lifelong scientist who led the development of Bounty paper towels, Charmin toilet paper, Folgers coffee and other products at P&G, says he embraces the philosophy of U.S. Rep. Hal Rogers that technology can level the mountains to create new opportunities for eastern Kentucky.

“I put all my energy into that premise,” he says. “I did the solar farm as a demonstration that people in the mountains have access to the same technology as anyone else.”

One of the greatest blessings in Gary Booth’s life was that television signals could not reach his parents’ home in Campton when he was a boy.

“All we had to do was read,” says Booth, who turns 78 this December. “I read a lot of science-oriented books. By age 10, I knew I would be a scientist. Not having TV was a rich blessing.”

He attended Campton Elementary and Wolfe County High School, then went to Eastern Kentucky University in Richmond to major in chemistry and math. While at EKU he met and married his wife, Jane, and the two have been together for 56 years.

Booth completed a doctorate in organic chemistry at Ohio State University and then embarked on a long career in research and development with P&G.

The Malone solar project is the latest in a long series of solar projects he developed. For 20 years, he has worked with SonLight Power—a Christian organization bringing power to poor communities—to install solar panels in Guatemala, Haiti and Africa.

In September 2017, he and SonLight Power placed 80 solar panels on the roof of Campton Baptist Church.

He also was instrumental in the solar array on the new science building at EKU, where students will monitor power production and learn how to manage the data.

“It’s been an absolute delight working with Licking Valley and the co-ops,” Booth says. “Every way they could help, they did it.” KL

KEVIN OSBOURN is the manager of Communications at East Kentucky Power Cooperative, which generates power for Licking Valley RECC and 15 other electric cooperatives.