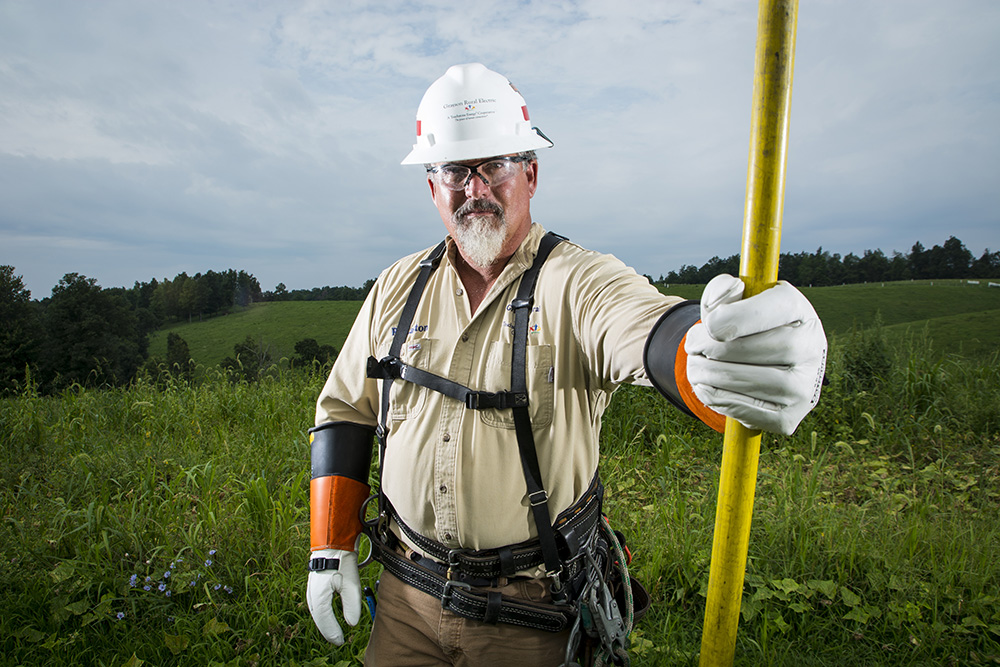 Richard Easton is a maintenance leadman with Grayson RECC and part of the all-important team that keeps the lights on. Photo by Tim Webb

Next time you flip a switch and the light comes on, think about the time it didn’t in a spectacular way for nearly 4,000 Kentucky electric co-op members.

Around 1 a.m. on a day in May 2011, a snake slithered into a Berea-area substation—that’s one of those fenced-in areas full of wires and transformers where high voltage gets stepped down for use in your home.

A snake is shaped a bit like a wire, and the last act for this reptile connected a couple of conductors not meant to be connected. Metering equipment shorted out, rupturing the voltage regulator and sparking a fire that destroyed most of the equipment in the substation.

Lights came back on for the co-op members less than 24 hours later. But the snake and the substation tell a larger tale of what it takes to keep electricity flowing. That larger story is that while building and maintaining a reliable electric grid calls for billions of dollars and thousands of miles of power lines, you also have to sweat the small stuff.

To find out what it takes to make sure you have electricity whenever you want it, we went to the source of the power.

For co-op members in Kentucky, that power comes from one of three large organizations, called generation and transmission cooperatives (G&Ts), because, of course, they make sure that electricity gets generated, then transmitted to your local electric cooperative. Your local co-op is called a distribution co-op because it distributes that power to the homes and businesses in your area. 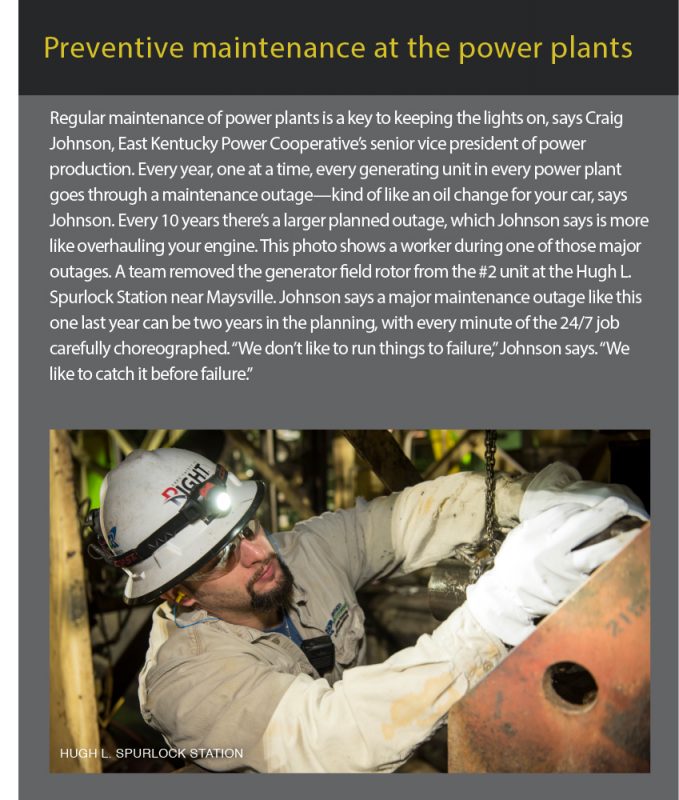 Representatives from all three tell similar stories about the enormous job of keeping the electricity flowing 24/7. And they all talk about critters—woodpeckers for Big Rivers and buzzards for TVA.

Nick Comer, the external affairs manager with East Kentucky Power, says it began using an attachment to go around the base of a substation fence, with a lip sticking out at the top so snakes can’t crawl up, over and in.

Preventing interference from varmints is just part of running the electric grid, which the National Academy of Engineering calls the most important engineering achievement of the 20th century. Comer, Chambliss and Ernie Peterson, the Kentucky general manager for TVA customer delivery, all describe

their mission as providing reliable, affordable and safe electricity—and they say each of those is critically important.

“You start with the fuel source,” says Peterson, which in Kentucky is mostly coal and natural gas, as well as some hydroelectricity, nuclear power and, increasingly, solar energy and other renewable power sources. “You’ve got to get that fuel to the power plant and then the plant’s got to be able to reliably convert that fuel into electricity, and then you’ve got to have all the proper transmission equipment in place so you can get the electricity to the distribution cooperative where they have all the right transformers and wires and communications equipment to get those electrons to the individual homes, businesses and industry.”

One key to getting all that done is planning. Massive, detailed planning. Every few years the three G&Ts produce a document of more than 200 pages called an integrated resource plan. In between are annual planning sessions.

East Kentucky Power is in the middle of its several-monthlong strategic planning session, involving dozens of staff and board members. They’ll analyze and talk through markets and finances for the different fuels they use, the future of renewable energy, environmental and other regulations, the status of their power plants and what the future cost of electricity might be.

All that planning results in power being off for only about two hours a year for the average utility customer in the United States. And the trend is improving. According to one standardized measure (a measure that excludes both extremely short outages and especially long and widespread outages), the average American was without power for just 127 minutes in 2016, down from 144 minutes 10 years earlier. The number of outages per consumer declined slightly as well, from 1.33 a year in 2007 to 1.3 in 2016. The length of each of those outages declined from 109 minutes in 2007 to 99 minutes 10 years later.

That reliability doesn’t happen without a lot of work. At Big Rivers, quarterly meetings of maintenance, engineering and operations staff review and find solutions for any problems.

And they make up practice problems to solve.

How do they get the ideas for the grueling scenarios?

“We come up with scenarios like you have this huge rain event where the roads are flooded and closed, then just as the rain stops, you have a major windstorm,” says Chambliss. “We blow everything down and now tell people to figure out how to get the lights back on. Last year we used an earthquake.”

Physical security and cybersecurity add another ingredient to reliability. The G&Ts talk about installing cameras to prevent theft of copper wire from substations. They describe protections from the thousands of electronic threats every day to the electricity network. Reliability involves working with state, regional and federal groups, especially the North American Electric Reliability Corporation, which develops and enforces standards to keep the lights on.

So electric utility reliability requires steps as big as building firewalls against internet hackers to as small as developing barriers for snakes. Entire departments are tasked with keeping trees and other vegetation away from where they can interfere with power lines.

For TVA’s Ernie Peterson, that broad and varied work and expertise is worth the attention it gets.

“I’ve spent some time on mission trips in other countries where having electric power, if you had it at all, is certainly not reliable,” says Peterson. “We’re blessed here to have electric power available to us anytime we want, truly at the flip of a switch. That doesn’t just happen.”