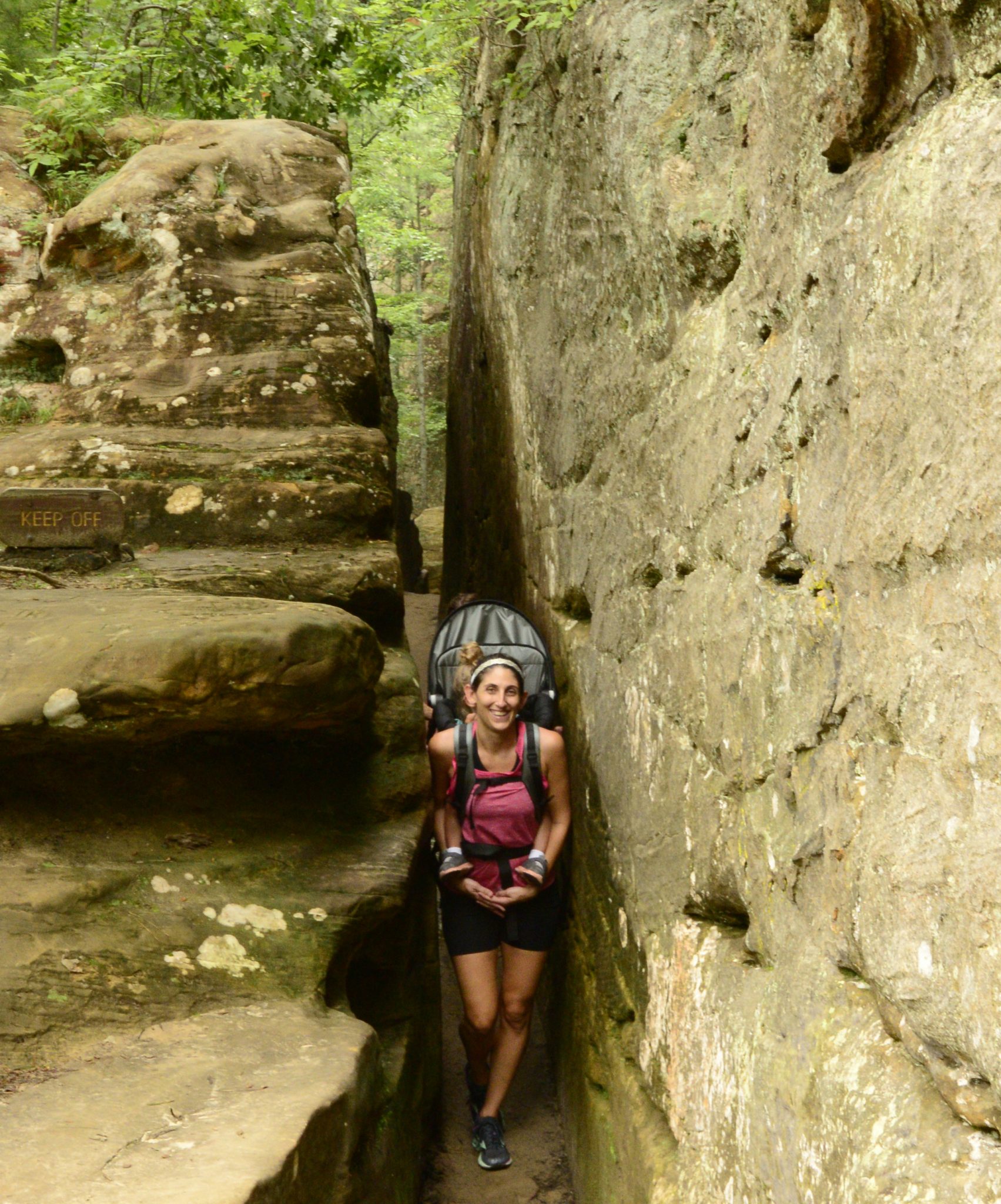 Make it a priority this spring to set out on a day hike on one of Kentucky’s beautiful trails near you. Whether you’re looking for scenic overlooks, a brush with history, or simply a chance to get lost in nature, it’s easy to find awe-inspiring trails throughout the state.

Natural Bridge State Resort Park
Folks have been hiking the short, .75-mile Original Trail up to Natural Bridge since the 1890s, and it’s no wonder why. Natural Bridge is one of the most unique—and instantly recognizable—spots in the commonwealth.

“It’s a very beautiful place, and definitely one of the most iconic landforms in Kentucky,” says Drew Stevens, a naturalist at the park. The Original Trail is the quickest route to Natural Bridge, but it’s not the only way there. Stevens recommends Rock Garden Trail, a 1.75-mile path,  as a slightly longer, less-crowded option. “It goes through a nice boulder field and you follow a beautiful cliff line,” Stevens says.
Once you’ve made it to Natural Bridge, take some time to enjoy the view. Follow the .75-mile length of nearby Laurel Ridge Trail to Lover’s Leap. Along the way, you’ll find Lookout Point, which offers postcard-worthy views of Natural Bridge.

Natural Bridge State Resort Park, which is served by Clark Energy Cooperative, offers 20 miles of hiking trails. The nearby Red River Gorge Geological Area has 67 additional miles of trails, making the region one of the most popular spots in the state for hikers. “The Natural Bridge/Red River Gorge area has the highest concentration of natural arches east of Arches National Park in Utah,” Stevens says. “Within a 10-mile radius of Natural Bridge, there are over 200 natural arches to see and enjoy.”

Blanton Forest State Nature Preserve
Encompassing more than 2,300 acres that have never been logged, Blanton Forest is the largest old-growth forest in Kentucky. The preserve itself, on the south face of Pine Mountain in Harlan County, includes more than 3,500 acres full of Eastern hemlock trees, tulip poplars, beech, sugar maples, oaks, and more—some towering as much as 100 feet, with trunks that are 3 to 4 feet in diameter. It’s believed that some of the forest’s trees may be up to 400  years old.

“It also gives you a good view of Pine Mountain itself, since you’re at mid-elevation.”
The preserve is home to many species of wildflowers, and its Watts Creek hosts a population of the threatened blackside dace fish. Blanton Forest is open year-round only to day hikers; camping, fishing, and hunting are not allowed.

Bernheim Forest has more than 35 miles of hiking trails, perfect for beginners and experienced hikers alike, from several .5-mile loops to a 13.75-mile, all-day hike. Families especially enjoy the half-mile Rock Run Loop. “It’s easy and fun, and the fact that there are some ups and downs and rocks and water to cross makes it fun for kids,” says Salt River Electric co-op member Wren Smith, Bernheim’s Interpretive Programs manager. “It really puts you in the heart of a nice Eastern forest, with a creek, limestone outcroppings, and mossy boulders.”

With nearly 15,000 acres, Bernheim Forest, south of Louisville in Clermont, offers a great place for bird-watching, especially in the early spring months when Kentucky warblers, ovenbirds, summer tanagers, woodcocks, and more can often be seen along the half-mile Bent Twig Loop and near Bernheim’s Education Center, Smith says.

For families with young kids, Bernheim Forest offers ECO Kids Discovery Days, designed to encourage children to get outside and explore nature, on the first and third Saturday of each month from 1–4 p.m. If all the hiking makes you hungry, Bernheim’s restaurant, Isaac’s Café, offers fresh meals made from the on-site edible garden.

Columbus-Belmont State Park
At Columbus-Belmont State Park, you can literally walk in the path of Civil War history. Portions of the park’s 2.5-mile Civil War hiking trail flow within remnants of trenches dug by Confederate soldiers in the fall of 1861. “When you come off the paved portion of the trail, you’re actually in the earthworks that the soldiers dug by hand,” says Lee Jackson, the park’s maintenance supervisor. “It’s fascinating to think that 23,000 men with shovels, mules, and horses dug this. In some places, it’s 16–18 feet deep, and 18–20 feet wide.”

When they were dug, the trenches served as protection for Confederate troops stationed at Columbus under the command of General Leonidas Polk. In November 1861, General Ulysses S. Grant knew he would be unable to overpower the heavily fortified Columbus, so his troops attacked the smaller Confederate outpost across the river at Belmont, Missouri. The Union forces took the camp, but the cannons started firing from Columbus, and Confederate soldiers from Fort DeRussey came across the river to aid the camp at Belmont. They were able to regain power at Belmont, and Grant and the Union soldiers were forced to retreat. Both sides claimed the victory. The Battle of Belmont is re-enacted at the park every year, on the second weekend of October.

In addition to its rich Civil War history, the paved portion of the Columbus-Belmont trail follows along the bluff edges of the Mississippi River, allowing stunning views of the river 160 feet below, especially at sunset.
When you’re there, make sure to keep a watch overhead. Guests hiking on the trail often see bald eagles soaring above.