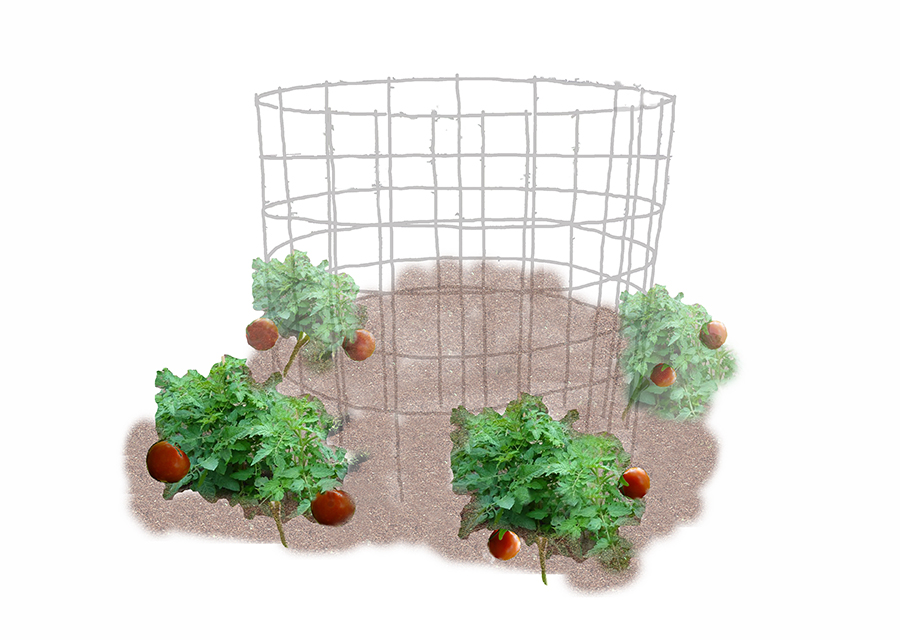 From Kentucky Living Archives May 1997

Every time I see a survey on home gardening it shows more people are doing it. Why? I feel it’s the human need for self-fulfillment and contact with nature that people find so important in today’s world. Whether it’s growing a geranium or a tomato, there is something satisfying in growing a plant from seed that produces a beautiful flower or an edible fruit.

There is hardly a backyard garden anywhere, large or small, that doesn’t have at least one tomato plant. Anyone who has ever raised a single tomato plant will never forget the first ripe, red, sun­warmed tomato that is picked and eaten right there in the garden.

But it took a long time for people to develop a taste for tomatoes. In fact, years ago we didn’t even trust the fruit as being edible. The tomato originated in the Andean Mountains of South America, in the region of Peru, Ecuador, Bolivia, and Chile.

Historians speculate animals helped spread the seed northward more than 2,000 miles from its center of origin. When the plants reached Central America, they were domesticated by pre­-Mayan Indians. The Aztecs were the first to cultivate, eat, and name the tomato.

Spanish explorers took tomato seeds back with them to Europe but most people there viewed the red fruits with suspicion. European botanists linked the tomato with the Solanaceae (nightshade) family, which to them indicated the tomato was poisonous.

Despite that, the fruit found its way to North America with the early colonists, and Thomas Jefferson supposedly raised it as an ornamental at Monticello in 1781. So how did the tomato shed the long-held suspicion of being toxic? We owe that to a man named Colonel Robert Gibbon Johnson.

In 1820, in Salem, New Jersey, Colonel Johnson distributed tomato seeds among local farmers and encouraged them to grow fruits as large as possible. Then he announced he would eat an entire basket full of tomatoes at the local courthouse when the crop came in. A large crowd gathered, expecting to see him drop dead after taking the first bite. But he didn’t and the crowd roared with approval when the last tomato in the basket had been devoured.

Last year, about this time, I wrote an article on growing tomatoes in a Japanese tomato ring. Simply put, the ring is made from heavy wire, like concrete reinforcing wire. It stands about 4 to 5 feet high and is as wide as you want it, but for the experiment I suggested a ring about 4 feet in diameter. The ring is filled with layers of compost, garden soil, and fertilizer. Then tomatoes are planted around the outside of the ring. The tomato plants are fastened to the wire ring as they grow. The roots develop under the ring, in the composted material, and the harvest is unbelievable. I asked people who tried it to write and let me know how it worked, and to date I would say from the mail that it was an unqualified success.

Take for instance a letter I received from Chuck Patterson in Ashland. He heard about the Japanese tomato ring when his father-in-law, who lives in Harrodsburg, sent him a copy of my article. Chuck built the ring, filled it with 240 pounds of store-bought manure, and planted the plants.

His three Better Boy tomatoes grew over the top of the ring and back to the ground. The first 100 tomatoes, he says, averaged a half pound each. The total harvest was 240 ripe tomatoes and 20 green ones, which he fried. He lost a few to squirrels and at least one to a terrapin. He is still trying to figure out the terrapin invasion since he grew his tomatoes in a raised bed. By far, Chuck said, it was the best tomato crop he’s ever raised.

By the way, Chuck likes to think of himself as an organic gardener and he swears by planting nasturtium seeds around the tomato cage to supplement his lettuce crop. I’m not sure whether it’s the nasturtiums or the kind of lettuce he grew, but Chuck says he did not find any signs of insects on his tomatoes.

Another letter about the tomato ring experiment came from George Bergan in LaGrange. He, like several others, had a hard time finding affordable wire. (This year here in Louisville, some garden centers are selling the wire in ready­-made rings.)

George settled on a wire he calls “remesh,” but he found it came in a minimum of 150-foot rolls, which would have cost about $50. It just happened that a building supply store had a sale on 50-foot rolls of 60”, 6” x 6”, 10-gauge wire for $18.50. He says he made five rings from the roll; two were about 3 feet across and the others slightly less. He cut the horizontal wires off the bottom leaving 5” to 6” prongs of wires at the bottom to support the ring in the ground. Next he says he layered the inside of the ring with compost, 10-10-10 fertilizer, and garden soil.

But George went beyond just raising tomatoes. On one ring he planted cucumbers and he says they did great. He picked 25 pounds of 6” to 8” cucumbers, and with the vines growing up the side of the cages, he says, the picking was easy. On another ring he planted Blue Lake stringless green beans and he says he was still harvesting in the early part of November.

But not everything was a success for George. His tomatoes developed nice size fruit, but they had limited ripening. He says he had nice green tomatoes hanging from the vines the first of November, which supplied some of his friends who like fried green tomatoes.

However, on the outside of yet another ring he grew cherry tomatoes and he said they did great, especially one called Sweet 100. I agree, the Sweet 100 tomatoes are wonderful with or without the cages. We have raised this variety for years and while the tomatoes are quite small, they are as sweet as a cube of sugar.

Several readers asked me last summer about raising a tomato or two in a bag on a patio or deck. It can be done. In fact, in England where garden space is limited, raising a few flowers or vegetables in what they call “growing bags” is very common. These bags filled with special soil are widely sold at garden shows and garden shops all over the United Kingdom.

If you want to try, just get a bag of garden topsoil, punch a few holes in the bottom for drainage, and cut a slit in the top through which you can plant one tomato per bag. Remember the tomato plant will need something to climb on, like the railing on the deck or patio. The only trick here is to make sure the soil in the bag never dries out. If that happens, then you could get premature blossom drop and a problem called blossom end rot. This is noticeable when a dark, leathery scar develops on the blossom end or bottom end of the tomato.

Blossom end rot is caused by insufficient calcium, which in turn is usually a result of a shortage of water during fruit development.

The “Japanese” Tomato Ring has a long and interesting story. It was first created by a Charleston, South Carolina, postman about 40 years ago. It seems a Miami newspaper reporter, Eddie Jones, interviewed Mr. Callahan (the postman) about the tomato. As Mr. Callahan and Mr. Jones inspected the tomato ring, they talked about tomatoes and Mr. Callahan’s tours in North Africa, Europe, and Japan when he was in the Air Force. Somehow or another, Mr. Jones got his facts confused and ended up thinking that the idea for the tomato ring originated in Japan, when in fact, Mr. Callahan just started implementing the idea on his farm in South Carolina.

(Just as an aside, it was Mr. Jones who coined the phrase “Bermuda Triangle” for the area where ships and planes sometimes spookily disappeared east of Florida.)

The story about the Japanese Tomato Ring ran year after year in the Miami Herald, and was picked up by other newspapers across the country. It came to Louisville, when Mr. and Mrs. Bob Rogers were traveling south for a vacation, saw the story in a Macon, Georgia, newspaper, brought it home and tried out the idea. Mr. Rogers was so impressed with the tomato production using this method that he called Fred Wiche to do a story about it.

When I first started this job, I had a bunch of requests for “Fred’s Japanese Tomato Ring,” but I didn’t have Fred’s files with the instructions. Then finally, one day, just in passing, Paul Rogers—the 84WHAS Sportscaster Extraordinaire—told me that it was his dad who gave Fred the instructions. Small world, isn’t it? Here’s how it goes:

You’ll need about 80 quarts of good topsoil. Mr. Rogers buys two bags of topsoil for each ring. If you have an excess of good garden soil, use that; it will take about two wheelbarrows full.

You’ll also need two bags of mulch. Mr. Rogers uses cypress mulch, but you could use any other shredded bark mulch or good quality finished compost.

Take 15 feet of 5-foot high farm fence (or concrete construction) wire and roll it into a circle 5 feet in diameter, placing the cylinder in a sunny spot protected from the north and northwest winds if possible. Clear a 7-foot wide circle and break the topsoil a few inches deep. Place the wire ring in the circle, leaving a foot of cleared soil a foot outside the ring.

Pat the topmost layer down in the middle to create a depression to hold water.

Plant four, and only four, tomatoes, spacing them evenly around the ring outside the wire. They will look small, but in time they will grow roots under and up into the pile.

Lightly fertilize the new plants. We mean lightly, because too much will wither them.

If things start to look dry, water the plants outside the ring when they are small and inside the ring as they grow. Support the vines by tying them to the wire with soft cloth.

Once tomato production starts pumping, top off the compost with another 5 pounds of fertilizer. Mr. Rogers harvests about 600 tomatoes per plant per year with this method.