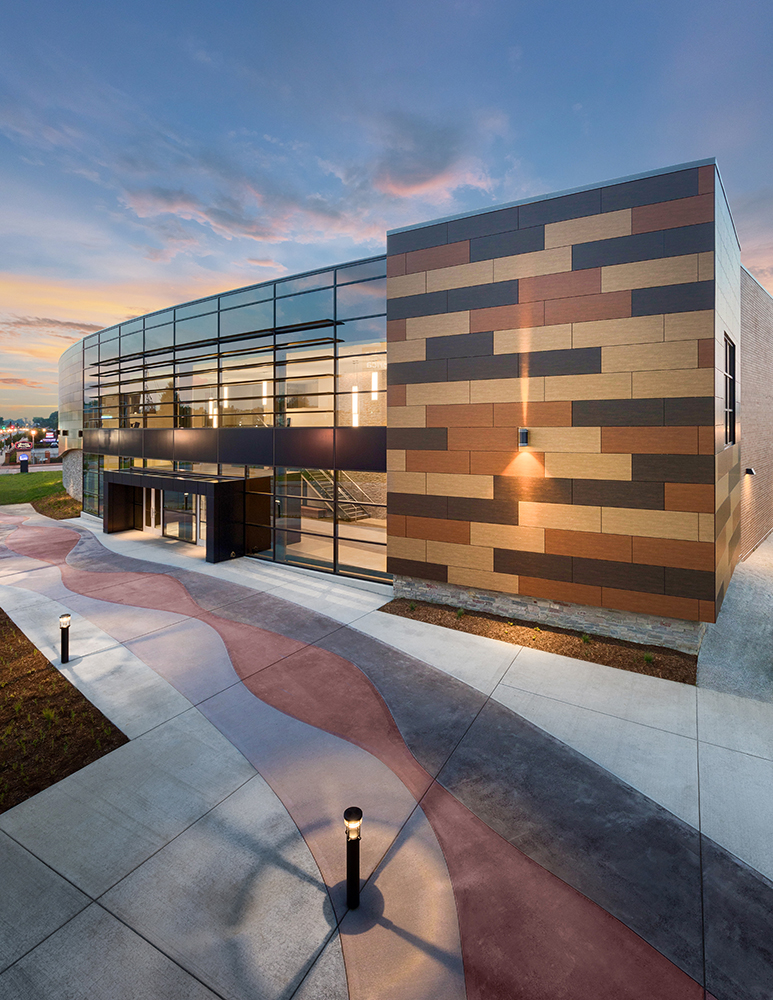 The Bluegrass Music Hall of Fame & Museum opens at Second and Frederica streets in Owensboro on October 18. Photo: AP Imagery

At the new, $15.3 million Bluegrass Music Hall of Fame & Museum in Owensboro, a bluegrass enthusiast picks up a banjo and starts pickin’.  The distinctive, ringing twang reaches the ear of another visitor, and she starts strumming a mandolin. A Dobro player joins in, and soon the impromptu ensemble is in the midst of a full-blown jam session, attempting to master the crisp, lightning-fast fingerpicking style required for Earl Scruggs’ bluegrass classic, Foggy Mountain Breakdown—at least this is the kind of scene Executive Director Chris Joslin hopes for when the facility celebrates its grand opening October 18-20.

“Something unique to bluegrass is the high rate of participation,” Joslin says. “There’s a repertoire most bluegrass musicians know, so they can produce authentic, organic music with no rehearsal. It’s easy to participate, and that’s what we want to promote.”

The stringed instruments near the entrance are meant to be played, not viewed as hands-off artifacts. Visitors are encouraged to take their pick and throw

down their favorite bluegrass licks.

Like the Country Music Hall of Fame and Museum in Nashville, Tennessee, and the Rock & Roll Hall of Fame in Cleveland, Ohio, the new museum will be the worldwide destination for the genre founded in the first half of the 20th century by Kentuckian Bill Monroe, called the Father of Bluegrass.

Its predecessor, the former International Bluegrass Music Museum, outgrew its home in the RiverPark Center, and the new, 50,000-square-foot facility at Second and Frederica streets will enhance the visitor experience in numerous ways.

For one, there will be more opportunities to actually hear bluegrass music. The 450-seat Woodward Theatre, a state-of-the-art indoor venue designed for the genre, is what Joslin calls the “central nervous system” of the new complex, and live bluegrass shows featuring a stellar lineup of established and emerging talent will be staged every Saturday night.

Sam Bush, dubbed the Father of Newgrass Music, will headline the opening of the theater on October 19, entertaining fans in an already sold-out performance with his folksy vocals and impressive ability to easily switch between the fiddle and the mandolin.

That’s not the only performance venue.

Thanks to the Michael Horn Family Foundation Stage overlooking the scenic Ohio River, bluegrass fans can clap along to their favorite music in a festival-like setting long after ROMP (Owensboro’s annual June bluegrass festival) is over. Next year, a series of “Downtown Romps” are expected to keep the riverfront resonating with the buoyant, vivacious notes of bluegrass throughout the summer.

History and Hall of Fame

First-floor exhibits chronicle the history of bluegrass from its nascence in the early 1900s to the proliferation of outdoor festivals in the ’50s and ’60s, and into the modern era, shining a light on contemporary bands that infuse their music with fresh rock and pop.

A highlight is the Video Oral History Project that showcases interviews with 220 bluegrass pioneers, including Del McCoury and Doyle Lawson. Monroe (1911-1996) died long before the project’s inception, but his son, James Monroe, tells the story of how an orphaned boy from rural Kentucky set the music scene on fire with Bill Monroe’s Bluegrass Boys, a band loved for its groundbreaking tight, rhythmic tunes.

Bluegrass as a new genre was officially born on December 8, 1945, at the Grand Ole Opry, a live weekly radio show in Nashville. That’s when Scruggs, famous for his three-finger picking style on the banjo, made his debut with the Bluegrass Boys, completing the historic lineup that included Lester Flatt on guitar, Chubby Wise on fiddle and Howard Watts on bass. They unleashed a polished, sophisticated sound, shattering the stereotype of the day that country music was played by moonshine-fueled hillbillies and required little real skill. Audiences were captivated by Monroe’s virtuosity on the mandolin and his high, plaintive tenor.

The second floor houses the International Bluegrass Music Association Hall of Fame, where rows of plaques commemorate bluegrass legends. Ricky Skaggs, a 15-time Grammy winner and Kentucky native, is part of the 2018 induction class and will soon be among the pantheon of luminaries.

Whether visitors grew up hearing bluegrass or just recently discovered it, they will come away with a deeper insight into the fabric of the music.

“Whatever your entry point into bluegrass is, whether it’s Alison Krauss or the Punch Brothers, the museum’s goal is to educate visitors on the source of their music,” Joslin says. “The fact is, it’s all rooted in a time, place and person. Bill Monroe’s experiences in this region shaped his music, and now it’s an international phenomenon loved by people around the world.”

Owensboro Museum of Science and History